Five Watches In Action Movies You Can Actually Wear

It’s the week of the 92nd Academy Awards! While the red carpet will be packed with the Hollywood’s elite flashing their (largely sponsored) baubles and tickers, we’ve decided to look back instead at some of horology’s most action-packed moments on the sliver screen. Best thing about this? There are modern iterations of these watches that you can actually own. 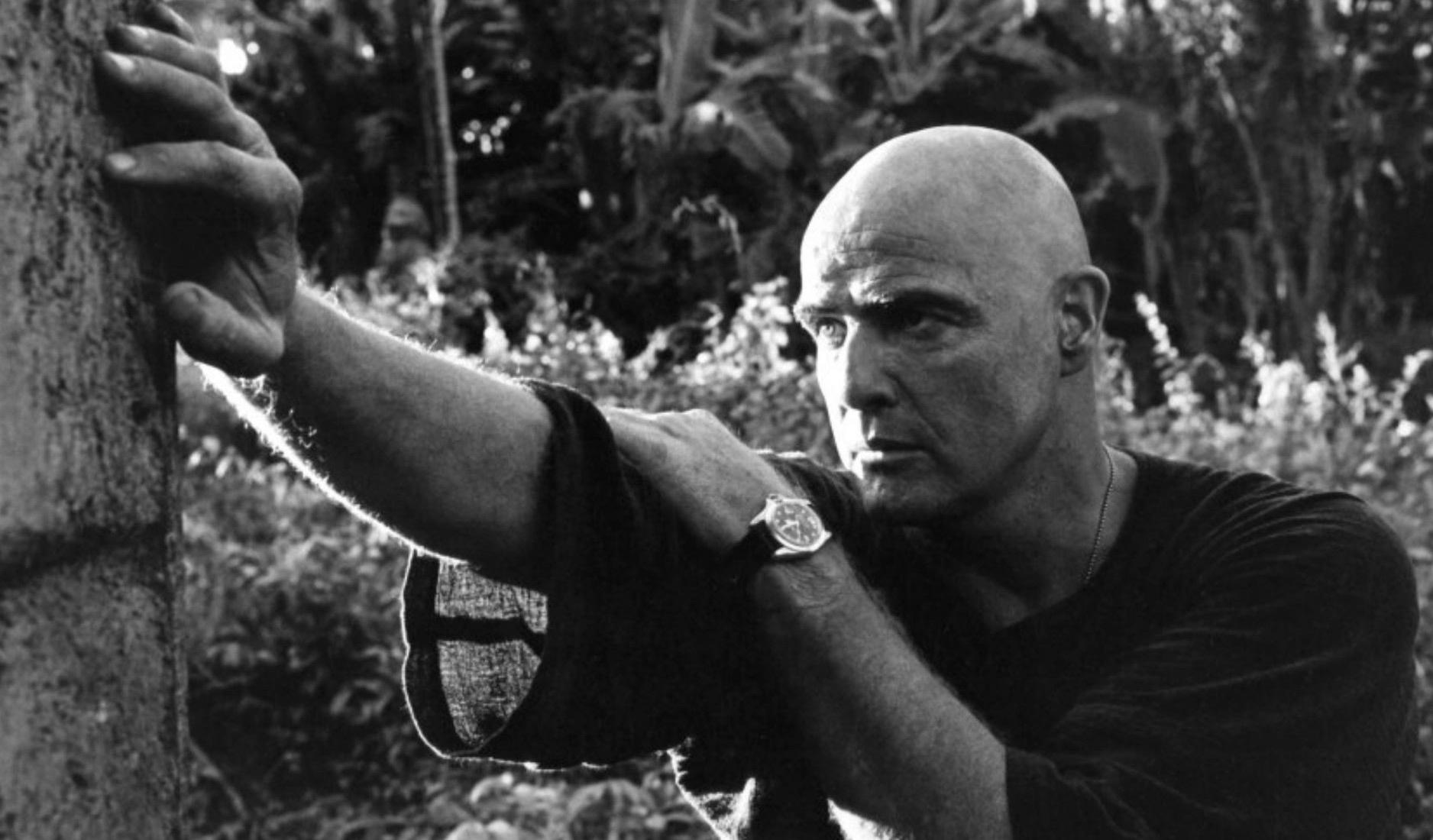 Playing the enigmatic and eerily psychotic Colonel Kurtz in Apocalypse Now, Marlon Brando showed that all’s not lost with his character, taste-wise, with the Rolex GMT-Master Ref. 1675 as his watch of choice. The movie won 'Best Picture' at the Oscars in 1980s, and the watch would have its own time in the sun decades later, when it went under the hammer for US$1.95 million in December 2019 at an auction (Phillips in Association with Bacs & Russo). 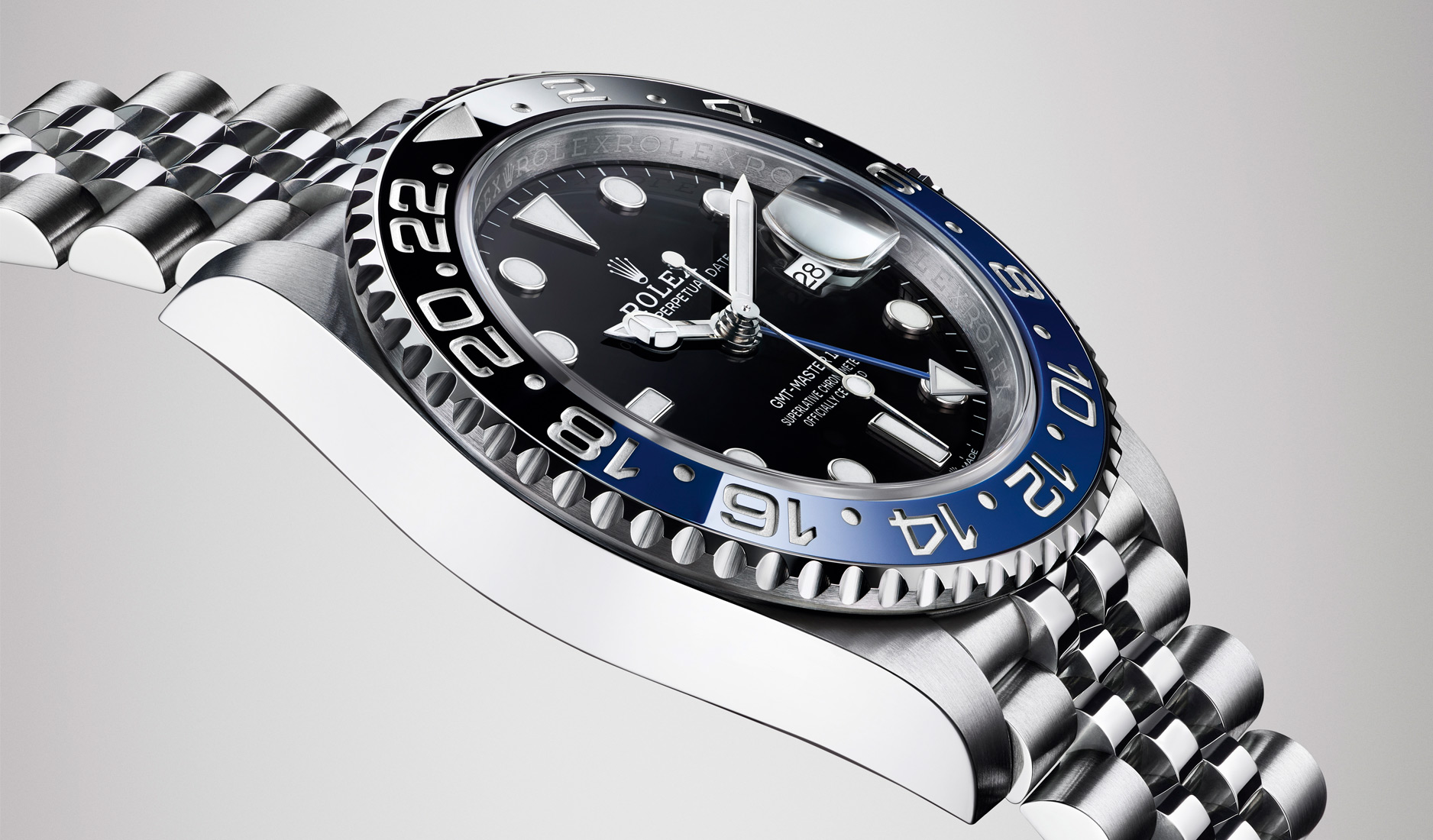 With the GMT-Master out of production since the 1980s, its successor the GMT-Master II has taken on the mantle as one of Rolex’s most popular sports models, with rabid and insatiable demand for its latest iterations such as 2019’s GMT-Master II Ref. 126719BLNR ‘Batman’. Read the full review HERE. But with a long waiting list for this baby, good luck on landing one. 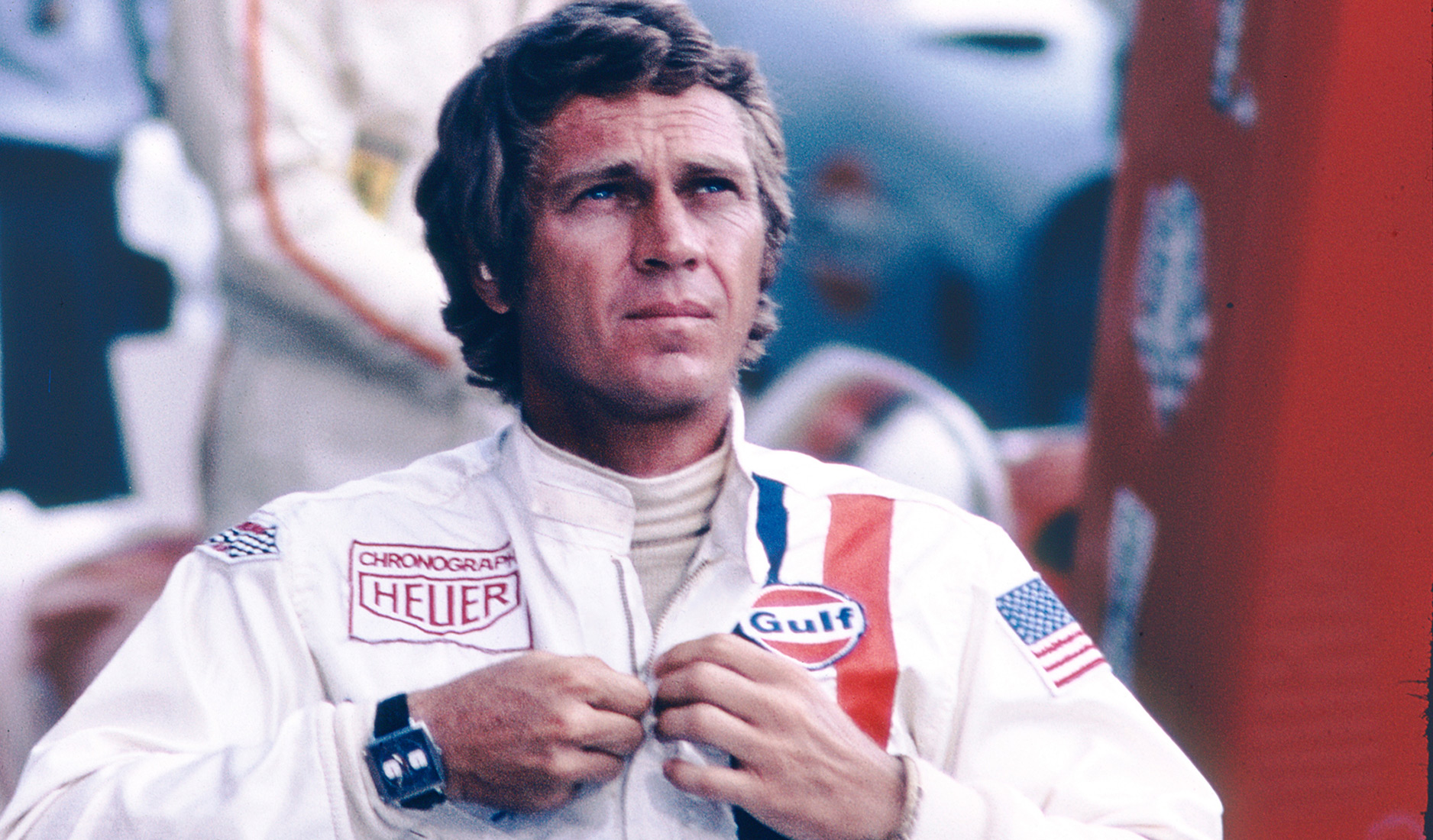 While it was named after the riviera-side Grand Prix and launched in 1969, the Monaco found its stride in 1971 thanks to the glitzy stardom that a certain Steve McQueen brought it. The American star of films like Bullitt (1968) and The Cincinatti Kid (1965) was set to star in Le Mans, and on the advice of Swiss racing driver Jo Siffert, wore the blue-faced Monaco as part of his wardrobe. The film’s popularity coupled with the fact that plenty of the promotional material saw the Monaco front and centre led to a great uptick in the Monaco’s fandom. 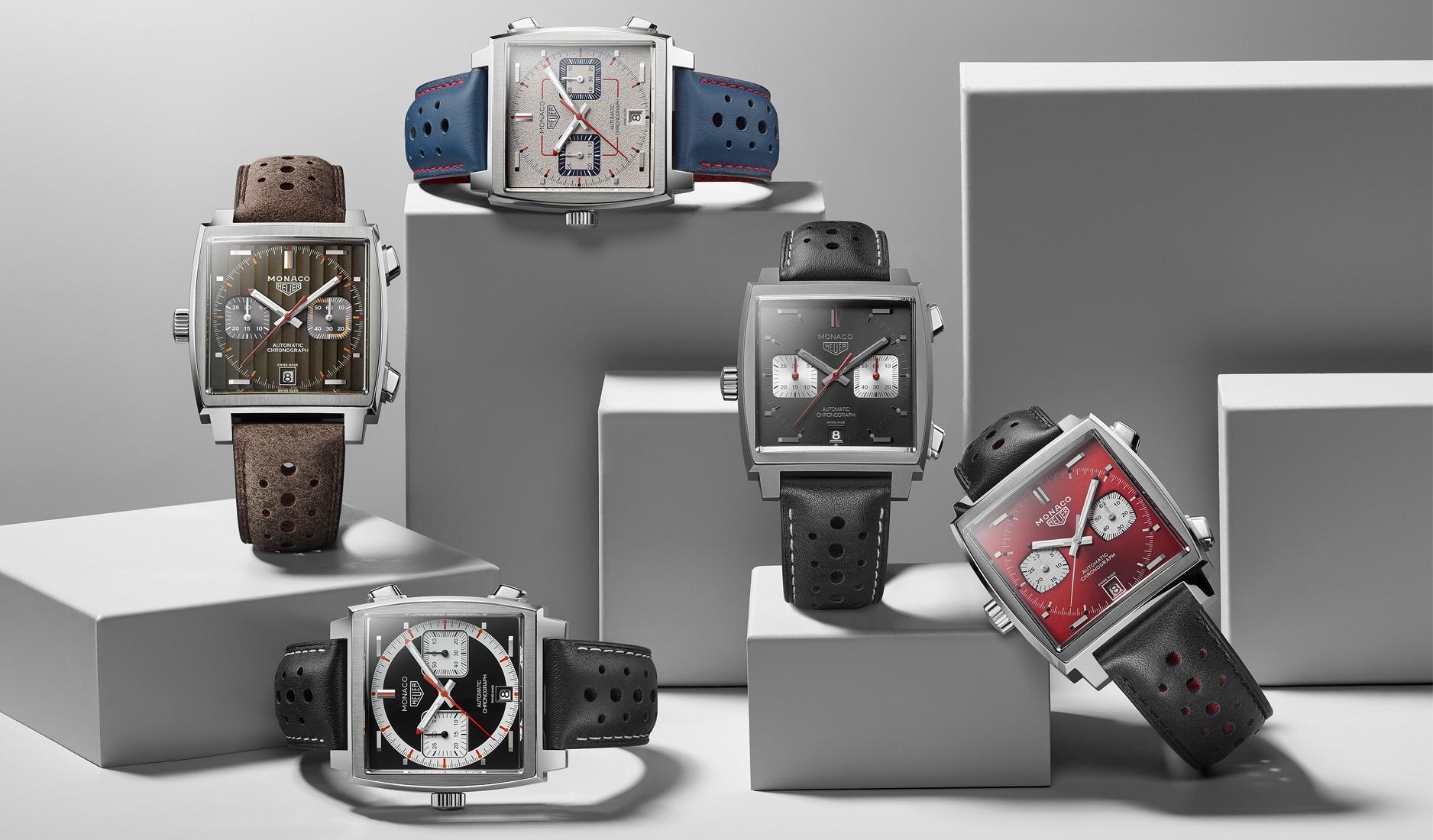 The collection celebrated its 50th anniversary in 2019 with five commemorative Monacos, each celebrating a different decade since its inception with different dial colours. They include a greenish-brown version (1969 to 1979); one with fiery red dial (1979 to 1989); a model with rhodium-finished dial with blue counters and red accents (1989 to 1999); our favourite, a monochromatic beauty with a black and white dial (1999 to 2009); and the final edition with black dial with silver chronograph counters (2009 to 2019). 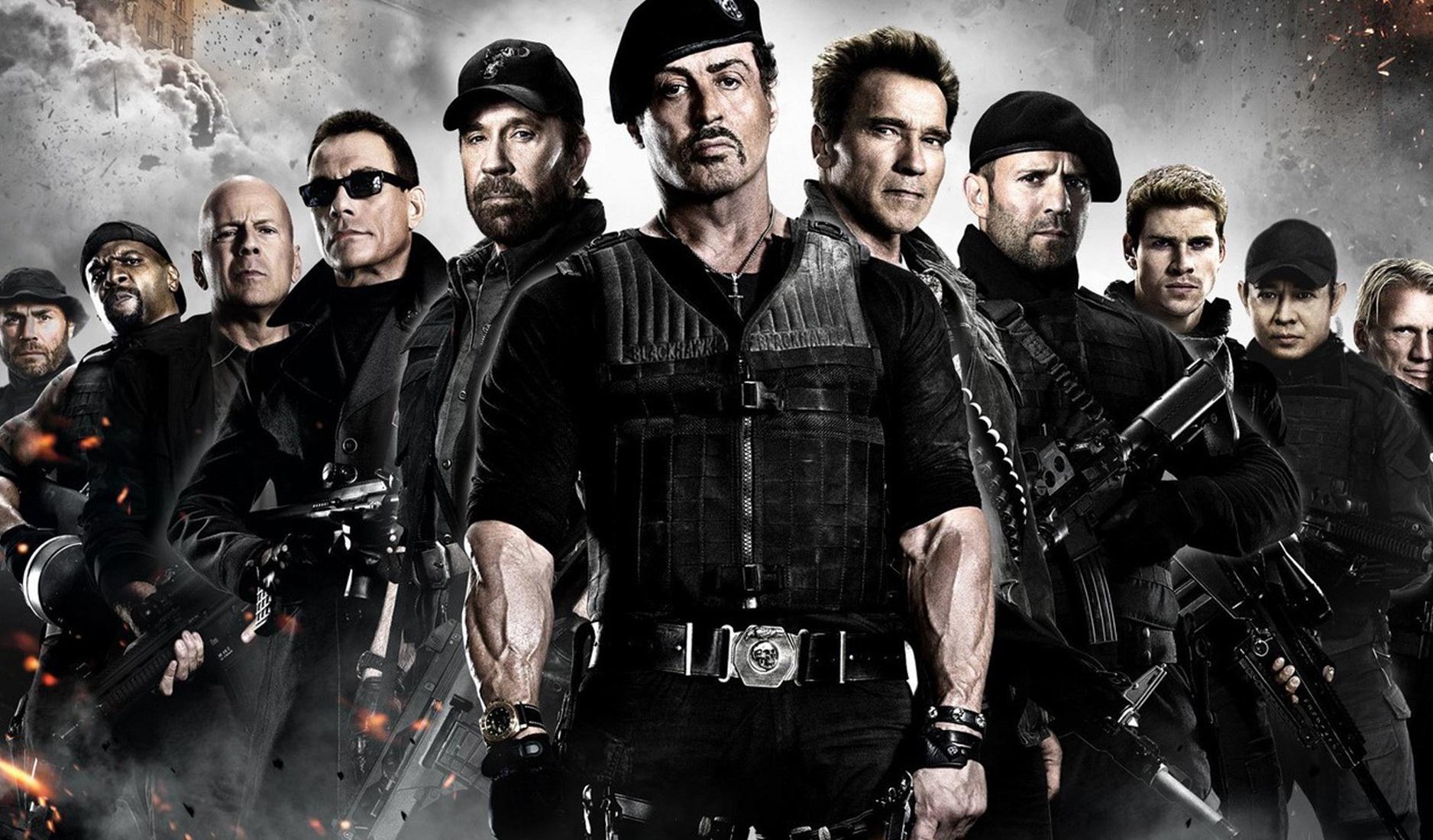 The all-star cast of Expendables 2, led by Sylvester Stallone with members that included Terry Crews, Jason Stratham, Chuck Norris and Arnold Schwarzenegger, amongst others, played a team of mercenaries armed with heavyweight artillery and high-octane wrist statements. Stallone is a long-time fan of Panerai, first showing the brand love when he wore a Luminor in his 1996 movie Daylight. In Expendables 2, Stallone took his enthusiasm for Panerai to the next level when he had the entire cast of action stars don the Luminor Submersible PAM382 ‘Bronzo’ – bought for them by the man himself. The chunky 47mm bronzed cased watch, which was launched in 2011 and limited to 1,000 pieces, was hot property at that time. Snaring the original limited edition Bronzos (the PAM382 and its 2013 follow-up, PAM 507, also limited to 1,000 pieces) might take a leap of financial commitment now with high prices on the pre-owned market. But here’s one way to scratch that Bronzo itch – with 2019’s Submersible Bronzo PAM 968. For one, it is not part of a limited edition range, so you can definitely stand a chance of scoring one at a Panerai boutique near you. Also, as an upgraded Bronzo, the PAM 968, powered by the Calibre P.9010 with twin barrels for three-day power reserve, offers several improved features, including a bezel with sandblasted ceramic insert and a chocolate hued dial that compliments the bronze tone beautifully. 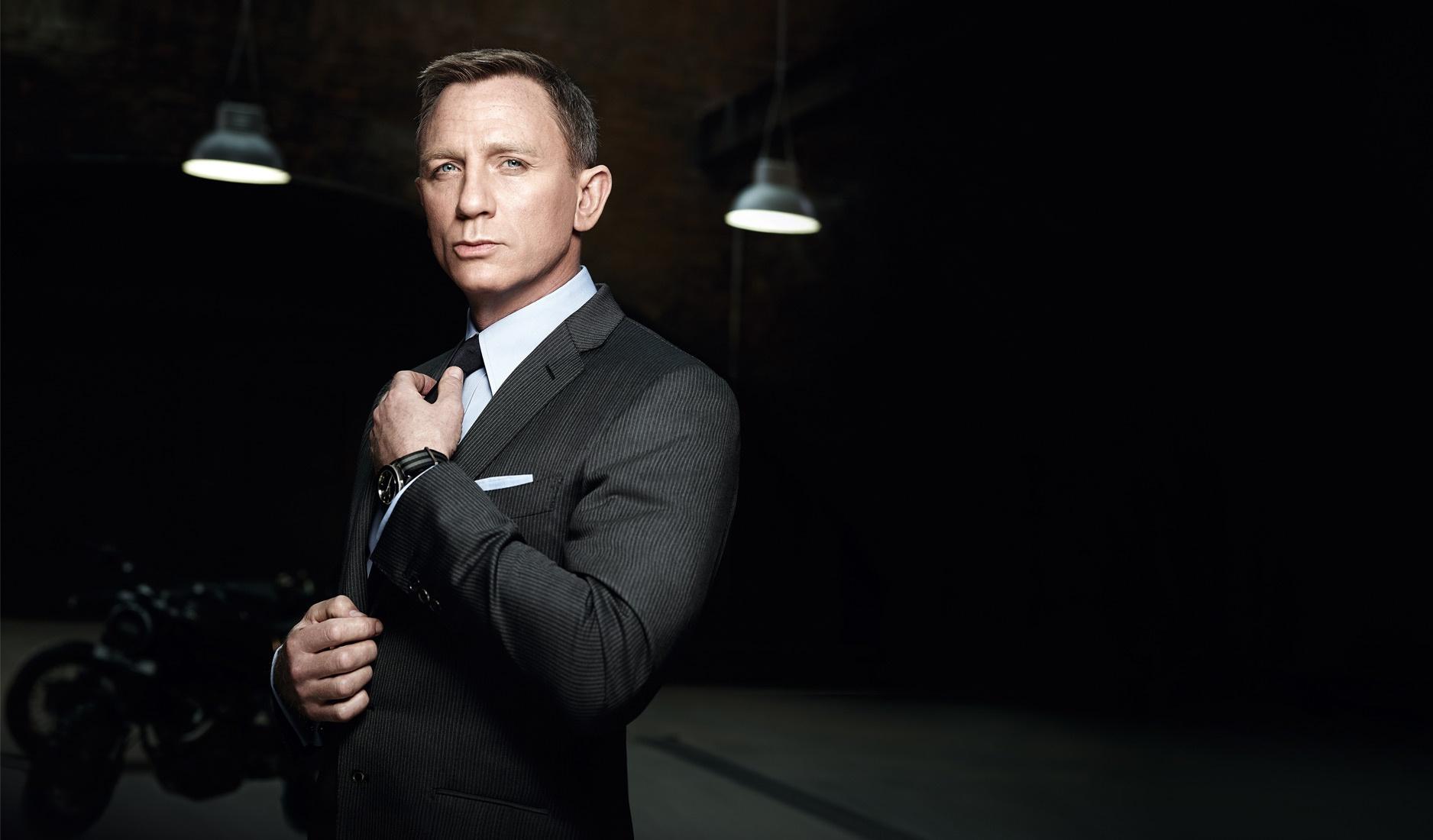 Since Omega partnered the James Bond franchise in 1995 with Goldeneye, the Seamaster has largely been the secret agent’s watch of choice. Pierce Brosnan wore the Seamaster Diver 300M, both quartz and automatic versions in Goldeneye, Tomorrow Never Dies (1997), The World Is Not Enough (1999), and Die Another Day (2002). His successor Daniel Craig proved more adventurous, donning the Seamaster Diver 300M and Seamaster Planet Ocean 600M Co-Axial chronometer in Casino Royale (2006), Quantum of Solace (2008) and Skyfall (2012). He then switched things up a bit in 2015’s Spectre, with the retro-inspired Seamaster 300 that was a reinterpretation of a classic piece from 1957. 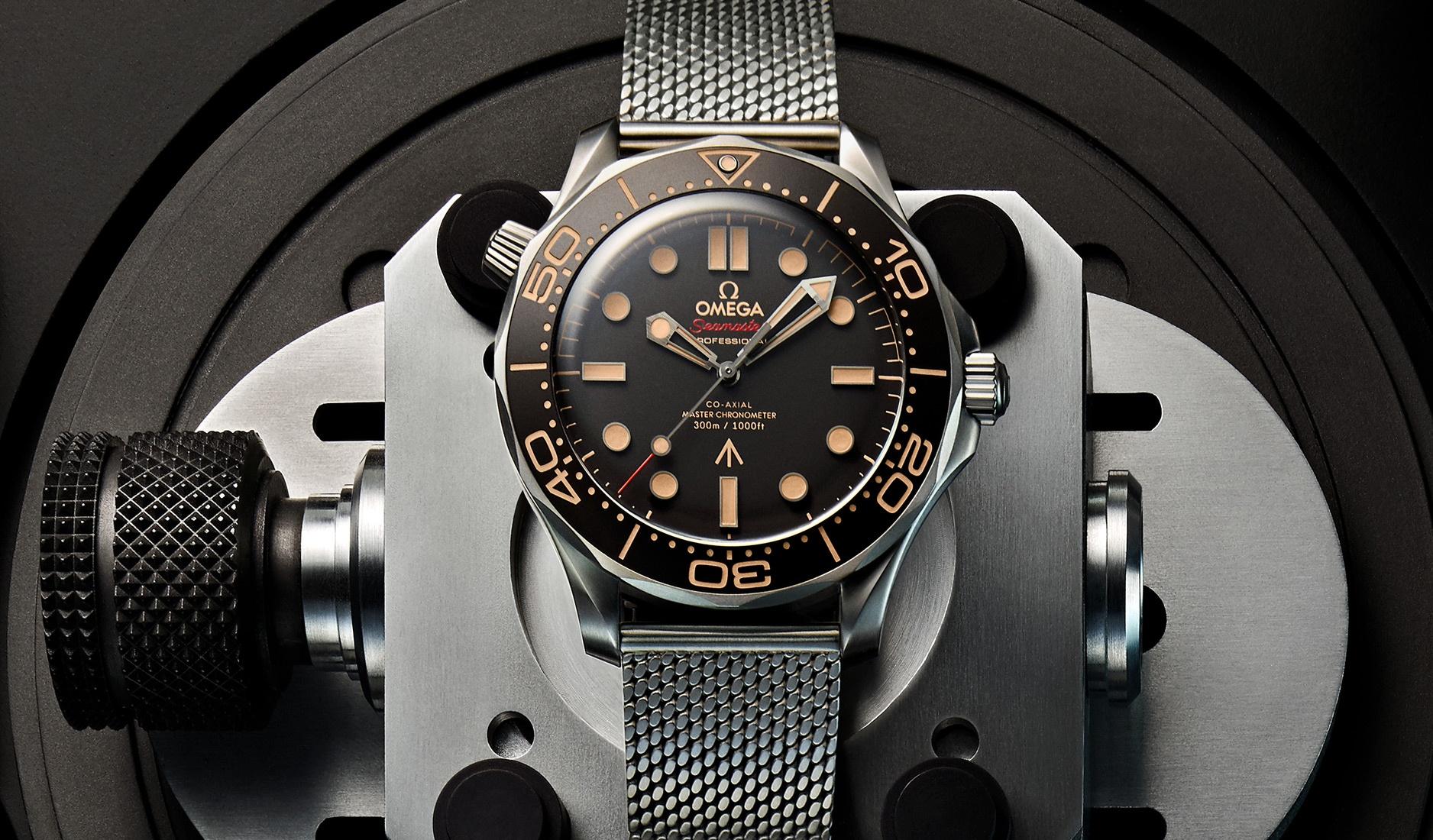 With 2020’s No Time To Die gearing up to be one of the biggest movie blockbusters of the year, Omega rises to the occasion with the Seamaster Diver 300M 007 Edition. Created with help from Craig, the watch is housed in a titanium case, features vintage-style brown accents on the dial, and is capped by a new domed sapphire crystal case that is thinner compared to other Seamaster Diver models. Interestingly, the caseback is engraved with numbers similar to those one’d find on military grade watches. On the Seamaster Diver 300M 007 Edition, you will find the numbers ‘0552’ (a naval code); ‘923 7697’ (code for diver’s watch); the alphabet ‘A’ (connotes screw-down crown); ‘007’ (James Bond’s agent number); and ‘62’ (the year of the first Bond movie).

HAMILTON Ventura in Men In Black 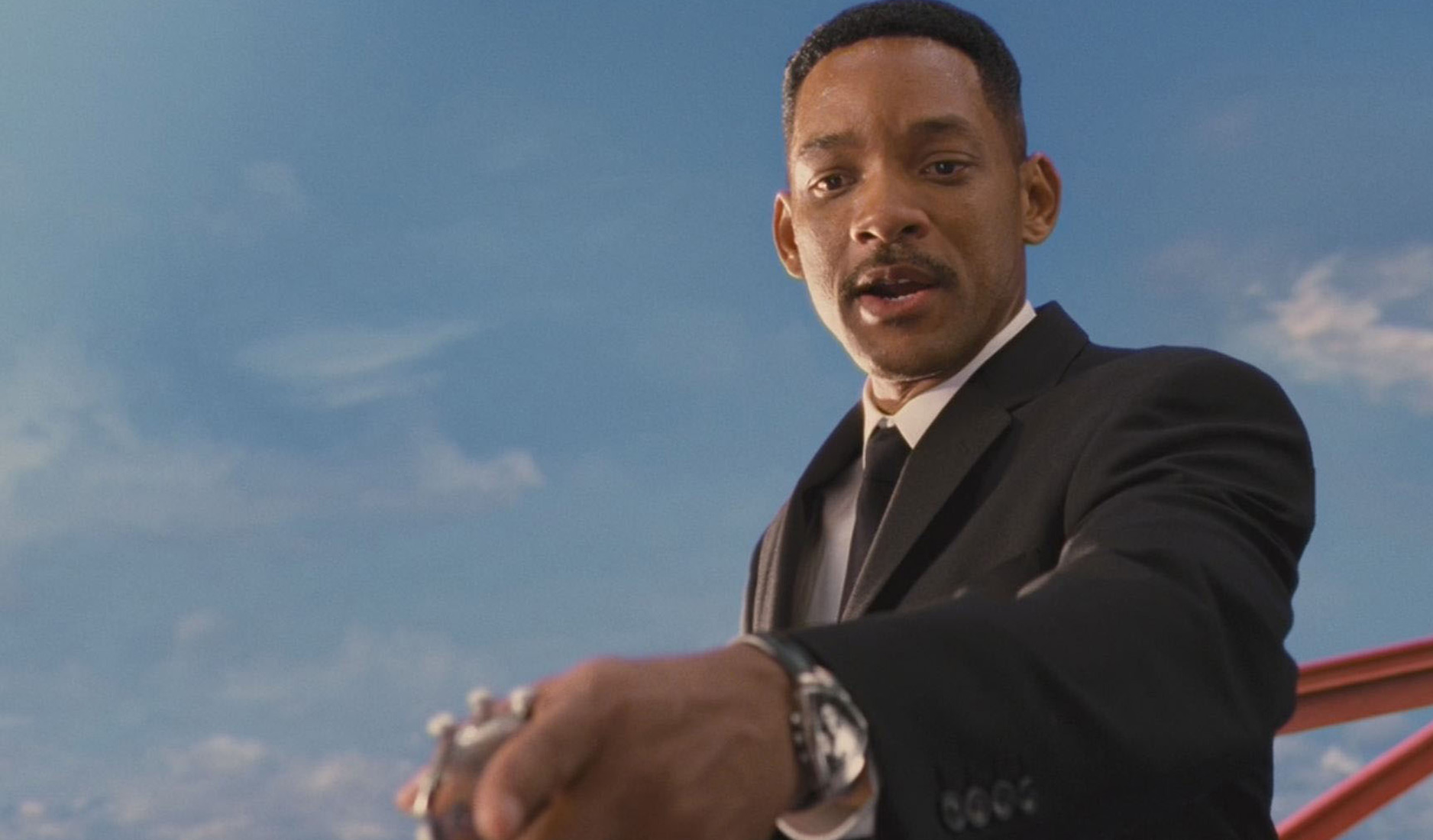 We can’t think of a watch better suited to be worn by cantankerous secret agents on the hunt for illegal aliens from space than the Hamilton Ventura. A personal favourite of Elvis Presley’s, who wore it on the set of Blue Hawaii in 1961, the Ventura is cool, kitschy, fun and avant-garde all at once – to think that the watch was actually born in 1957! A staple of the Men In Black franchise right from the start, the Ventura was worn by the OG cast of Will Smith and Tommy Lee Jones, right to the latest dynamic duo of Chris Hemsworth and Tessa Thompson. 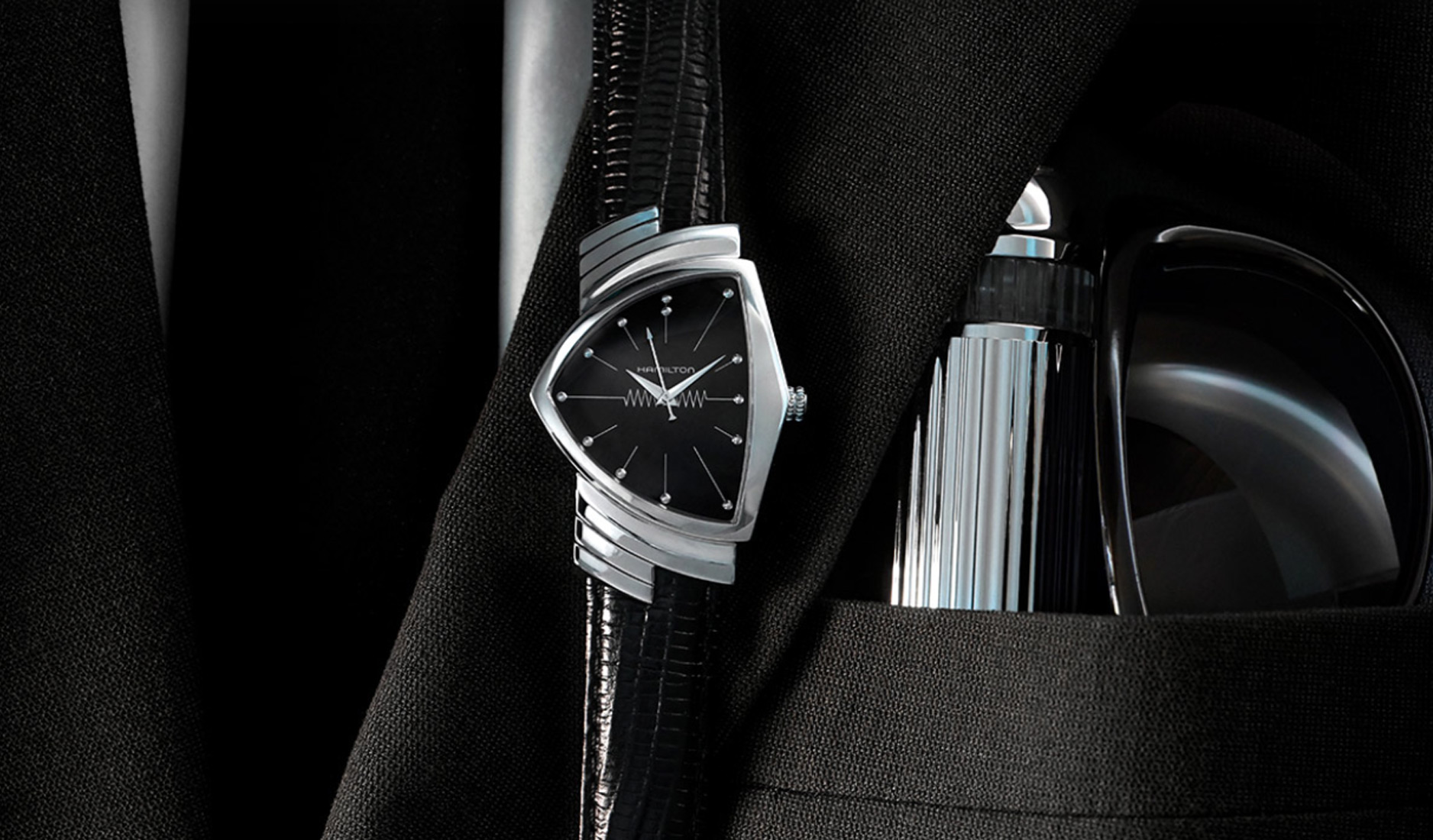 Tessa Thompson wore the 32.3mm x 50.3mm Ventura Quartz in Men In Black International, and that’s the one to snare if you are after the no-nonsense, back-to-basics Ventura vibe. Framed by the unique triangular case in steel, the dial bears an electric current motif that alludes to the Ventura’s origins as the world’s first electric watch. Also, at just slightly over S$1,000 a pop, the watch offers a lot of horological swag as one of the true icons of modern watchmaking.