It is no secret that Mother Nature is one of horology’s greatest muses.

So it’s time for another Earth Hour, where folks who care a little about the planet we live in show solidarity by switching off their lights for an hour on the last Saturday of every March at 8:30pm. (Which falls on the 26th this year, in case you are wondering.)

Organised by the World Wildlife Fund, the event is arguably the world’s largest environmental event, and millions of people around the world are expected to take part.

And it has always proved to be as spectacular as it is moving, as the world’s most iconic landmarks like the Eiffel Tower, Burj Khalifa, Buckingham Palace and Singapore’s own Merlion and Fullerton Hotel go dark for an hour.

Here at CrownWatchBlog, we pay homage the way we know best – by celebrating the moment with nature-inspired timepieces that we love. 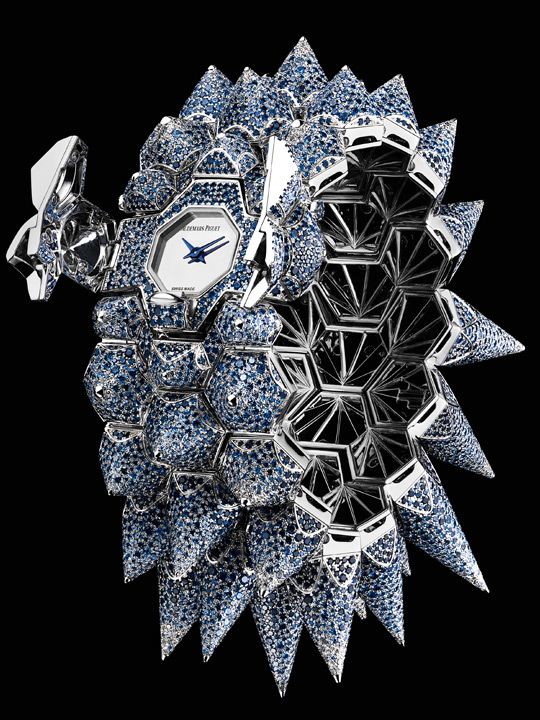 The third edition of Audemars Piguet’s high jewellery Diamond-series of secret watches again sees the brand taking inspiration from the sights and mood of the Vallée de Joux in winter, where the company’s based.

Think snow-blanketed landscapes and gigantic icicles, rendered in glamorous flamboyance fit for the red carpet. The cuff watch’s larger-than-life spikes are crafted in white gold and festooned with brilliant- and baguette-cut diamonds, using the snow-setting and invisible techniques for a spectacular shimmer. Two versions of the Diamond Outrage are available – one set entirely in 10,277 white diamonds totalling 65.91 carats, and another set with 11,043 brilliant-cut sapphires totalling 65.47 carats (pictured).

The Bronzo gets on this list because it is a watch that can really show the passage of time and the effects of the elements. A large part of bronze's appeal lies in its rustic demeanour – that earthy, muted gold sheen that changes over time. The change in patina is caused by oxidation, a process that forms a layer that protects the material from corrosion. Although the patina serves a functional purpose, watch brands tend to market the feature as a way to personalise the watch.

Which brings us to the Luminor Submersible 1950 3 Days Automatic Bronzo. This is the third iteration of Panerai’s Bronzo that debuted in 2011 and promptly flew off the shelves. This year, it comes in a 47mm Luminor 1950s case, featuring a blue dial for the first time. With the two earlier models getting snapped up as soon as they were released, this 1,000-piece limited edition is likely to be received with similar enthusiasm.

A spot of moon gazing now and then puts things in perspective, showing how tiny our planet is in the grand scheme of things. Little wonder then, that watchmakers have often sought to capture the charms of the celestial orb in gateway complications.

In the Lange 1 Moon Phase, the said display, which charts the waxing and waning of the moon, is given the royal treatment. For one, it is integrated with a day/night indicator that accurately reflects the time of the day, achieved via a 70-part moon phase mechanism comprising two discs – one on top depicting a solid gold moon, and a separate gold disc at the bottom. The discs turn once every 24 hours, coloured in a brilliant gradient azure hue that appears bright blue during the day, and dark navy at night.

It is one thing to pay homage to Mother Nature, and quite another to upstage it, as the Automate Fée Ondine demonstrates.

Taking eight years to make, the clock involved the likes of celebrated automaton maker Francois Junod, famed cabinet makers Dominique and Erica Sanson, alongside artisans and gem-setters from 15 independent workshops, as well as Van Cleef & Arpels’ in-house gem-setters. Upon winding, the gears are set in motion for a 45-second sequence that shows a sculpted gold fairy stirring to life, its wings flapping while sitting on a gently cascading leaf, and a lotus that slowly blooms into view. The scene is hypnotic and dreamlike, nestling on an ebony veneer clock base with a retrograde-hour movement with eight-day power reserve. But don’t just look at the picture, here’s a video that does the creation justice.