Those looking for a pre-owned timepiece in Singapore will inadvertently have Chuan Watch on their radars. But why? 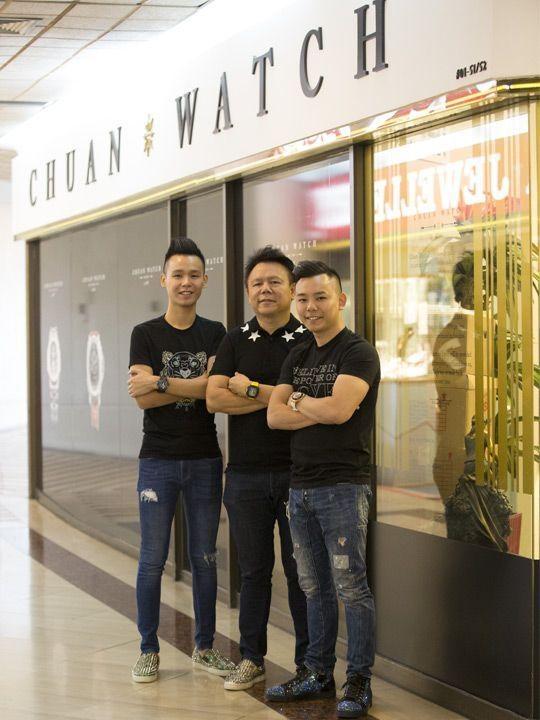 The men behind Chuan Watch: (left to right) Shaun, Henry and Nicholas Lim

It was an early Monday morning when CROWN visited Chuan Watch. The doors had just opened but a customer was already inside, requesting to view a Panerai watch that had just been updated into the company’s inventory, which he saw on Chuan Watch’s website.

Established in 1995, Chuan Watch is a go-to name for pre-owned luxury timepieces in Singapore. The company was started by Henry Lim, previously an experienced technician with a prominent Swiss watch brand who “wanted to break out of salaried employment”. He is now joined by his sons, Nicholas and Shaun, 25 and 23, respectively. Both are poised to take Chuan Watch into the next lap, with one foot planted in the online realm and another secure in the personal experience vital to pre-owned luxury watch retail.

Inside the store at Golden Landmark Shopping Complex, one finds a dream roll-out of the most desirable – and almost current – watches on the market today. Popular models from Rolex, Panerai, Omega, Hublot and Audemars Piguet are well-represented. There were more than a few empty slots, suggesting that timepieces were snapped up before they even hit the shelves.

Chuan Watch’s reputation was already in good stead under Henry’s stewardship. The business, however, grew most significantly when Nicholas joined the company – then at just 17 – to help Chuan Watch establish its online presence. His brother, Shaun, joined later, about a year-and-a-half ago, to help in the technical service department, mentored by Henry, no less, described by his sons as “among the best in the business”.

Nicholas talks to us about the evolution of Chuan Watch’s business and offers some tips for customers looking to buy their first luxury ticker.

How has Chuan Watch’s business evolved?
“One cannot do business today without paying attention to online platforms. For Chuan Watch, we cannot just rely on people walking into our shop weekly to check out the new arrivals. Our website is a very important way of keeping customers updated constantly about what we have. Although we had a regular pool of customers, the challenge was to bring in new clients, especially from beyond Singapore. Since we implemented our online strategies, our business has increased significantly.”

Pre-owned watch dealers trade on trust. What is your company’s take on this?
“The online world may seem anonymous but it can also be a great source of information. People trust our company because there are a lot of testimonials out there, and we are also frequently talked about on watch forums. We engage our customers a lot online, and that has a lead-on effect in terms of word-of-mouth recommendations.

The experience eventually has to be personal, of course. We treat our customers with care and respect when they come into the shop. Trust is fostered this way. Anytime they want to have a pre-owned watch from us verified with an authorised service centre, they are free to do so. And if there should be any discrepancies found from an authorised source, we will acknowledge that and offer a full refund.”

Tell us about Chuan Watch’s vetting process.
“We are very selective about what we take in. If it was a watch that was smashed with parts that are irreplaceable, of course we will give it a miss. On our end, we issue our own one-year, in-house warranty for the watch movement, as well as a buy-back scheme, so there is a ‘safety net’ for customers. By the latter, we mean that if a customer buys a watch from us, and would like to sell it back to us, and if the watch is in a reasonable condition, we offer a trade value of a certain percentage, subject to the price of the watch.”

Who are your customers?
“We cater to clients from all walks of life. Someone could walk into the shop with $2,000 to spend and we will have something for him. The point is that we hope to grow with our customers as they grow their collection, or be there as they work towards their dream watch.”

Any advice for someone buying a pre-owned watch for the first time?
“If you are someone who gets bored easily, go with pre-owned. But if you know you are never going to part with the watch, then go with brand new. Also, always buy within your means. If you have $5,000 to spend, don’t look at a watch that costs $6,000. At the end of the day, luxury watches are a want, and not a need.”