Ox-themed tickers to help you charge ahead.

It never ceases to amaze us how attuned Swiss watch companies have become to the nuances, beliefs and traditions of a culture half a world away from theirs. The Chinese Lunar New Year, which starts on 12 February this year, has also become a thing now for these watch brands, as they rush out Zodiac animal-themed watches to commemorate the occasion and woo what has become their most important overseas clientele.

The second among 12 Chinese zodiac signs, the sign of the Ox is revered by the Chinese for its industry, faithfulness and reliability – pretty helpful virtues to help us through 2021. And affluent Chinese collectors will no doubt be pleased by the selection of Ox-themed timepieces this year, which span glamorous accompaniments to erudite and artsy complications. 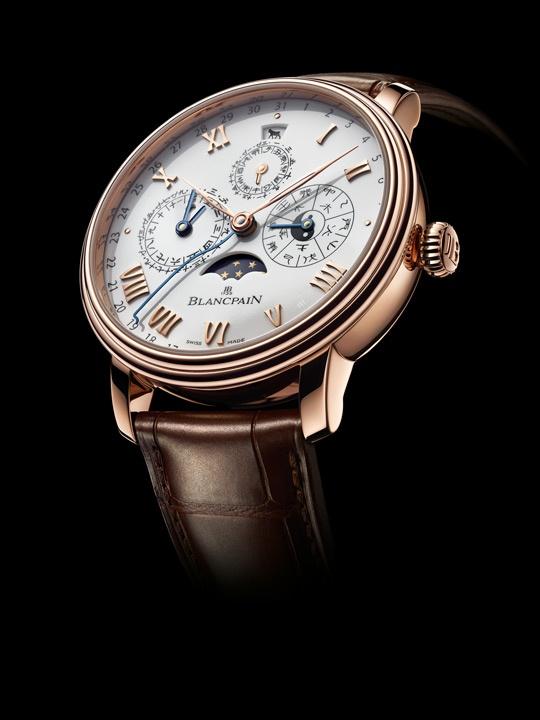 A truly one-of-a-kind calendar complication from a brand known for calendar complications, the Traditional Chinese Calendar does exactly what it says. Instead of the Gregorian calendar display that we are used to, the watch shows indications like double hours, days, months and leap months, zodiac signs, five elements and 10 heavenly stems that are based on Chinese lunar cycles and astronomical calculations. The hat-doff to the Year of the Ox is subtle here, with the animal appearing in a window at 12 o’clock. Encased in 45mm red gold with grand feu enamel dial, this beauty is limited to 50 pieces. 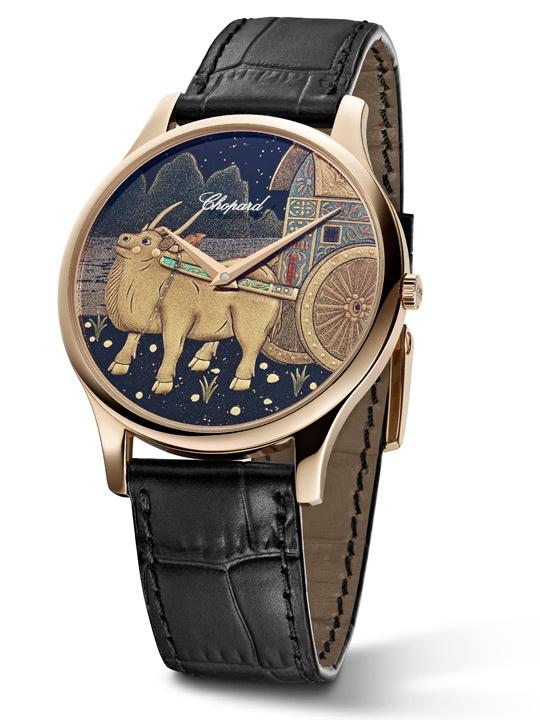 Since 2013, Chopard has introduced a Chinese zodiac-themed watch for the Lunar New Year. The watches are all executed on the same canvas, the ultra-thin L.U.C XP, and bear dials with motifs rendered using the traditional Japanese decorative technique known as Maki-e, which combines Urushi lacquer derived by a sap of a special tree (toxicodendron vernicifluum), and gold power. The dial is artfully crafted by master lacquer artist Minori Koizumi, who depicts the animal as a symbol of resilience and industry, harnessed to a wagon and travelling mountainous country roads. Limited to 88 pieces. 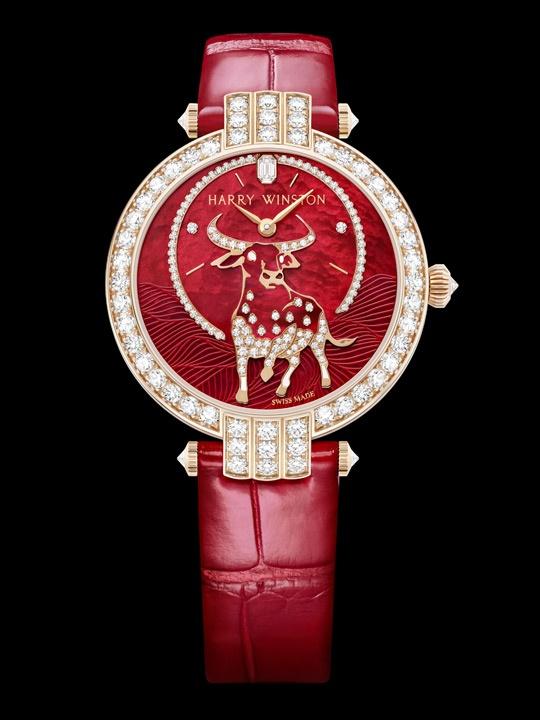 For those who enjoy going old-school with your get-ups during Chinese New Year – we are talking lots of red and gold – this unabashedly forthright offering from Harry Winston has your name on it. The muscular beast is portrayed by outlines in 18K rose gold, with its horns, chest and legs festooned with diamonds. In fact, the entire watch is set with 162 brilliant-cut diamonds on the rose gold case and dial, along with a signature emerald cut diamond at 12 o’clock for that unmistakable Harry Winston dazzle. To really bring it home, the watch features a mother-of-pearl dial and alligator strap in eye-snapping bright red, a colour regarded by the Chinese as the most auspicious. Limited to eight pieces. 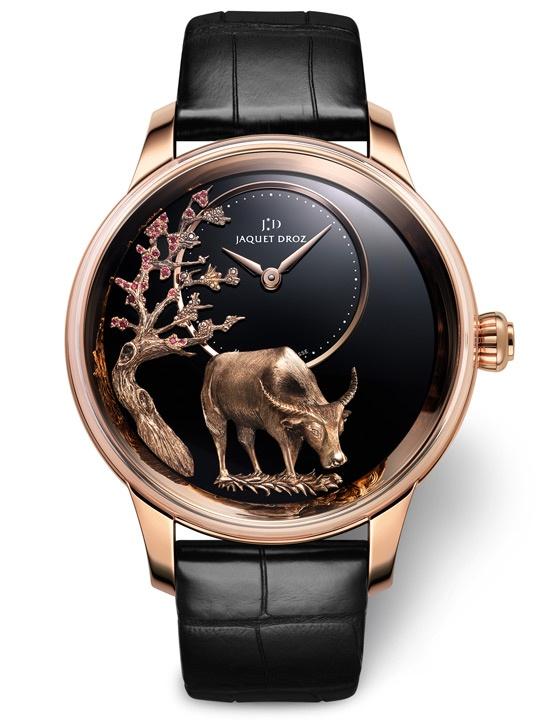 Of the four Year of the Ox commemorative watches that Jaquet Droz has released, the Petite Heure Minute Relief Buffalo strikes us as the most eye-catching. Collectors who prefer something slightly more nuanced a subtle can check out the Petite Heure Minute Buffalo with enamel dial that feature the miniature painting technique, available in 35mm and 41mm gold cases. This model in 41mm red gold, however, grabs us with its sheer presence, the namesake animal appearing lifelike and three-dimensional in sculpted gold, grazing under a golden plum tree with red ruby blossoms. The intricate lines and depth of the hand-engraved ox and tree are further heightened by the jet-black onyx dial. Limited to eight pieces.