With a little help from an award-winning lensman.

IT STARTED THE TREND FOR OPEN-WORKED DIALS
When Breguet launched the first Tradition watch in 2005 with the Ref. 7027, the brand helped popularise open-worked dials. Unlike skeletonised watches, where excess metal is removed from the movement to leave only its bare-bones architecture, watches with open-worked dials partially showcase the movement’s key components that in turn allows for a three-dimensional expression of its architecture. The watch featured in this story, the Tradition Ref. 7037, lensed by photographer E.K. Yap, illustrates this beautifully. On the open-worked architecture, one is able to admire the watch’s multi-layered construction and myriad finishes in their full glory.

BUT THAT’S NOT THE MOST IMPORTANT THING
The Tradition collection is steeped in Breguet history. The look itself is inspired by what’s known as the brand’s ‘souscription’ watches from the 18th century. Legend has it that back then, brand founder Abraham-Louis Breguet would sell those timepieces – simple watches with basic calibres – on a ‘subscription’ basis, whereby customers would pay a 25 per cent down payment for the watch, and the remaining amount upon delivery. It was a system that accorded Breguet enough cash to fund his R&D projects that would ultimately lead to the many groundbreaking innovations that continue to define modern watchmaking.

BREGUET’S KEY INVENTIONS ARE ALWAYS ON DISPLAY
Over time, the Tradition collection has grown to include a variety of complications that include a second-time zone (Ref. 7067), a chronograph (Ref. 7077), and minute repeater (Ref. 7087), amongst others. However, there are always a few important mainstay features: the overcoil hairspring, pomme hands, engine-turned guilloché dial, coin-edge case and possibly the most signature to the Tradition collection, the pare-chute shock resistant system.

The system was invented in 1790 and is widely regarded as a pioneering shock-resistant system. It comprises a small steel spring, which holds the endstone and balance jewel in place, the system absorbs shock by allowing the jewels, which hold the balance pivot, room to move, thus allowing the wider pivot shoulders of the balance staff to take the shock. Here on the Ref. 7037, you can see it at the bottom right of the dial. 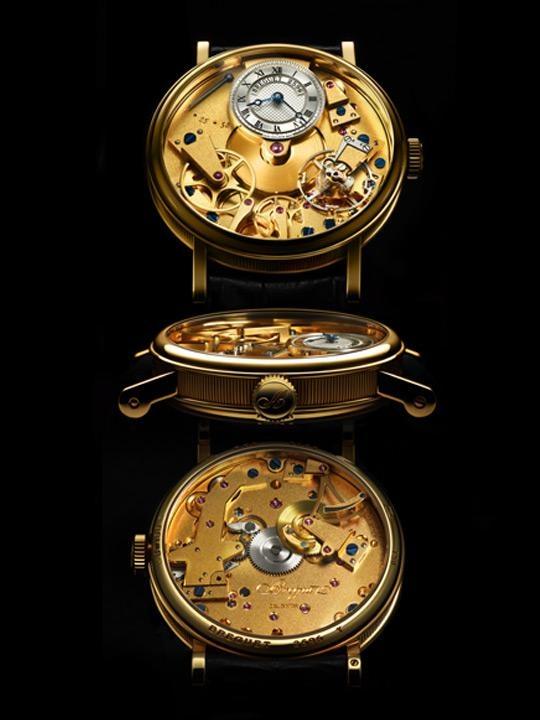 All images courtesy of E.K. Yap.