According to CROWN’s editors, that is.

It is that time of the year to make lists, and we’ve asked all of CROWN’s editorial honchos to name their favourite timepieces of the year – each gets to pick three, yeah we are greedy that way. Read on for our totally biased choices, and let us know if you agree! 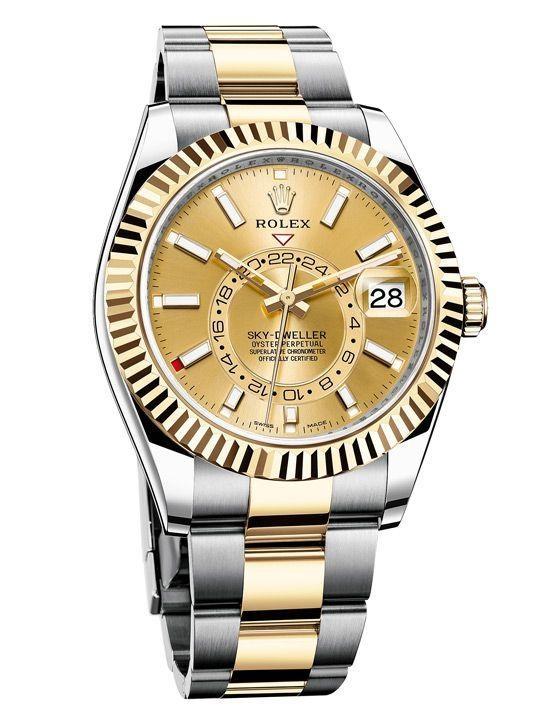 The Sky-Dweller may not be the first Rolex that you’d would go for (see this article for that), but it has certainly attained the stature of a grail buy. When it debuted in in 2012, the Sky-Dweller was the first new Rolex complication in almost 10 years. Intelligent and functional, the Sky-Dweller’s best virtue then, as is now, is its ease-of-use. The watch is best known for its proprietary ‘Ring Command bezel’, which can be used to set the date, home and away times – both forwards and back – by simply turning the bezel. Yours truly is loving the new yellow Rolesor garb – the first time Sky-Dweller is clad in the unmistakably boss-like colours. 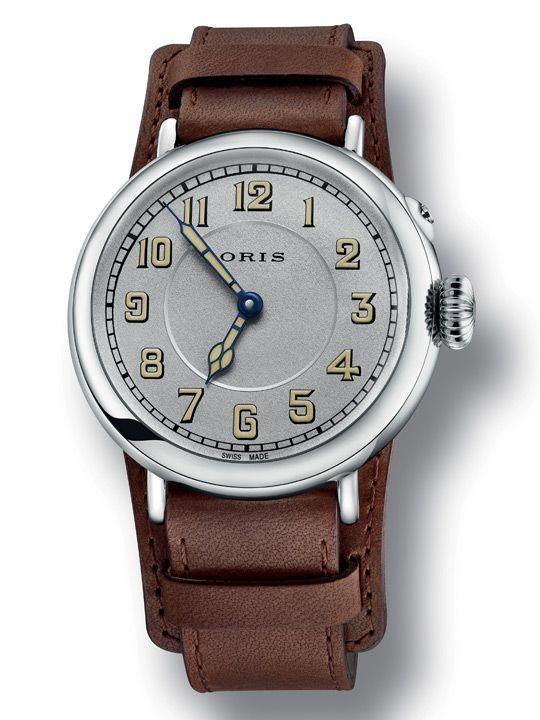 This gets my vote for value buy of the year. At S$3,500, the Oris Big Crown 1917 makes a strong case for retro-inspired limited editions done right. The back story is that Oris discovered it once made pilot’s watches – among one of the first, in fact, as records show – and this watch is an exact replica of a 1917 model. While powered by a modern automatic movement, the ‘new’ version oozes nostalgia from every angle, with case, dial, hands and lugs that recall the original. 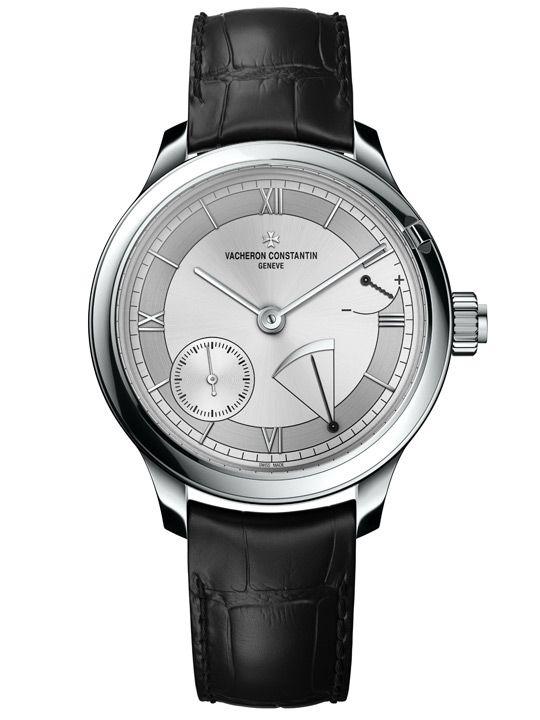 It is said that the grande sonnerie is the most technically complex watch to perfect, so hats off to Vacheron Constantin for not only achieving the monumental feat, but for doing it with style and sophistication. This watch took over 10 years to develop, and it is a marvel, featuring a bezel activated selector to choose between grande sonnerie, petite sonnerie and silent modes; six safety systems to prevent damage to the movement. Rather surprisingly, it is only the first-ever Grand Sonnerie wristwatch from the 262-year-old marque. 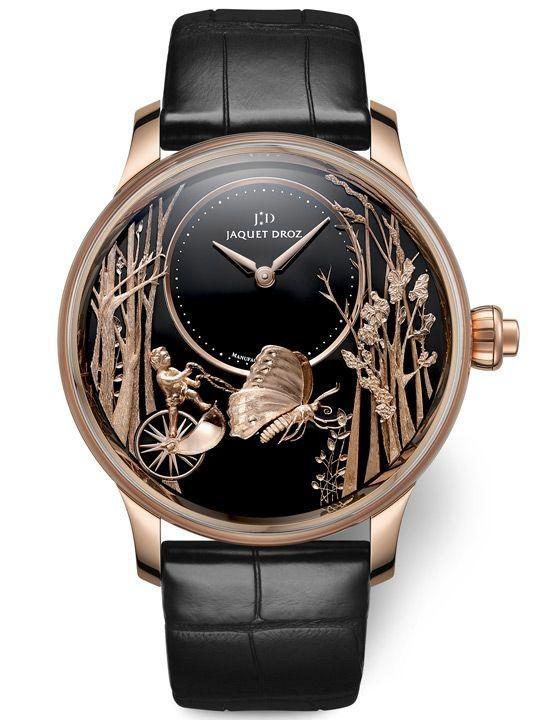 The Swiss marque never fails to impress with its stunning automatons and this year’s Loving Butterfly is no exception. Featuring a pastoral scene of a cherub on a chariot pulled along by a butterfly, and set against an enchanted forest, the watch is breathtaking both inside and out.

At the push of a button, the butterfly’s wings flutter gracefully as the chariot’s wheel spins. Powered by two barrels, the butterfly is able to flap its wings 300 times over two minutes when fully wound. In fact, the watch has two patents pending—one for the automaton mechanism and the other for the gorgeous dial decoration, proving the brand’s chops in both technical and artistic competencies. 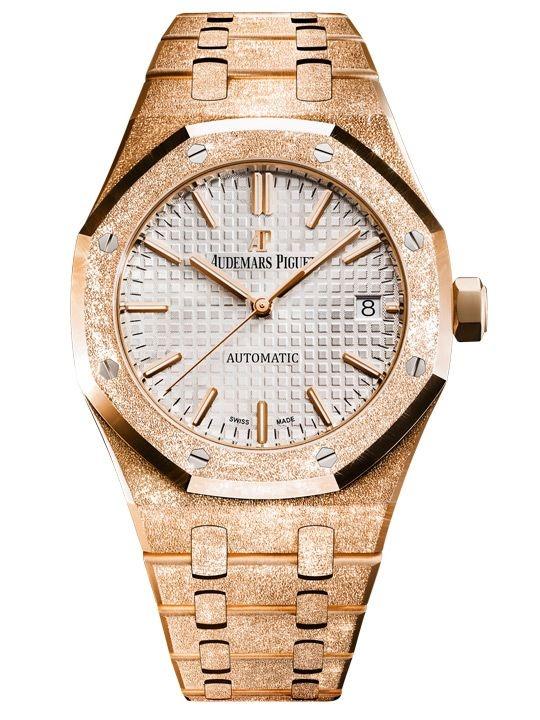 I love that this feminine version of the iconic Royal Oak doesn’t pretend to be fancy with a host of complications, neither is it drowned in diamonds so it can be marketed as a ‘ladies’ timepiece’. Instead, Italian jewellery designer Carolina Bucci applied a Florentine technique of hammering gold to give the watch surface a frosted look, not unlike that of powdered sugar. Or a million sparkling diamonds. Better still, the watch is actually smooth to the touch, so no chafing concerns there—just pure elegance. Check out our review here. 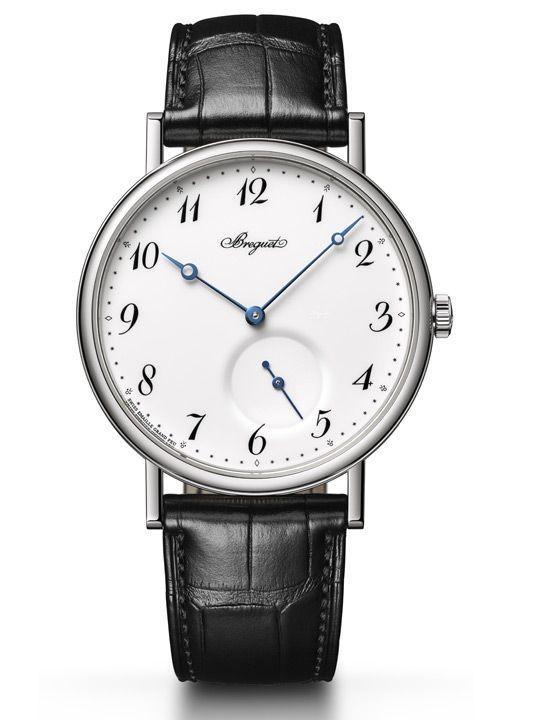 Never has a watch been so aesthetically minimalist yet embodied so much heritage in its simplicity. From the Breguet hands and indexes to the signature fluted caseband and cursive logo, the Classique 7147 is, as its name suggests, incredibly classic. The ‘Grand Feu’ enamelling on the dial gives it a beautiful white glow, accentuated by the recessed sub-dial at five o’clock. Inside, the watch is anything but simple, with the Calibre 502.3SD featuring a silicon balance spring and inverted in-line lever escapement with silicon horns. 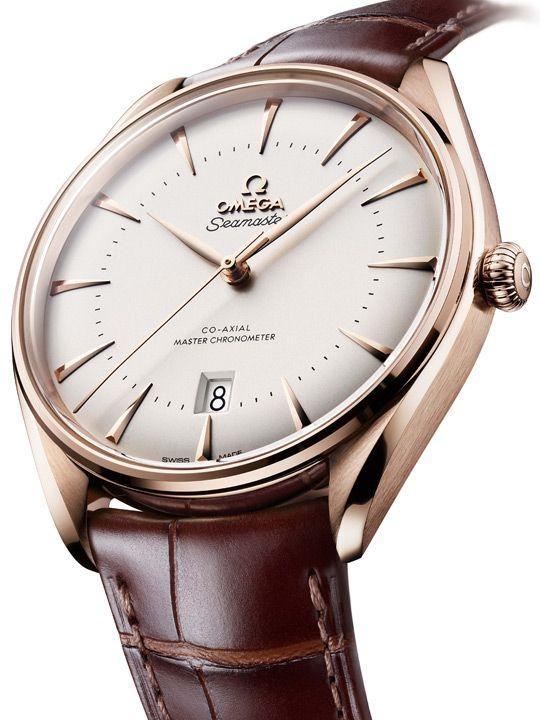 Being a sucker for all things vintage, it is hard not to fall for the Seamaster ‘Edizione Venezia’, a charming retro-inspired timepiece. The watch is said to be inspired by Venetian architecture and culture, and the prevailing vibe of the city during the 1950s. That said, this is no brittle oldie – the watch comes in a Sedna Gold case and is powered by Omega’s famously robust Master Chronometer movement. Style-wise, the watch’s simplicity and elegance is stunning - the opaline silver dial, slim gold hour indicators, and three long ‘leaf’ hands combining splendidly to make it a perfect accompaniment for the office or formalwear. I love how Bulgari has managed to create a complication that is dressy and classy, while extolling its technical merits. The skeletonised dial that displays the mechanical inner-workings and the flying tourbillon is a joy to behold. Even more amazing is the fact that all the technical goodness is packed into a movement that is just 1.95mm thick, making it the world’s slimmest skeleton tourbillon wristwatch. The famous Octo case is, of course, designed by the legendary Gerald Genta, which endows this handsome and brainy creation instant iconic stature. 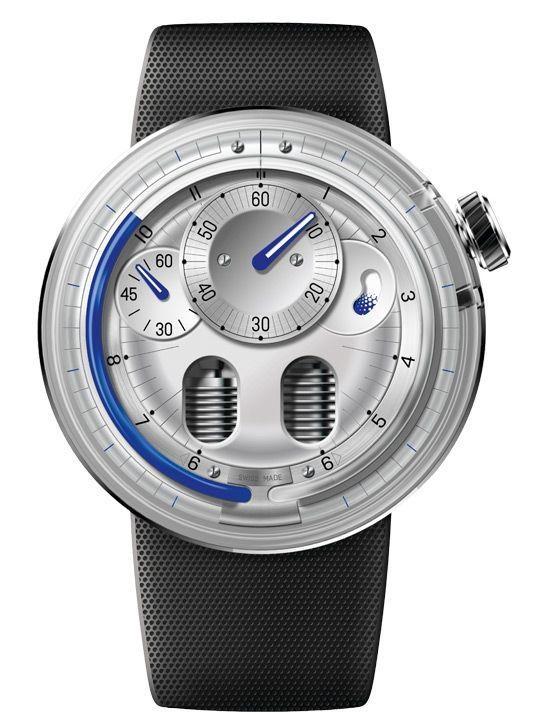 HYT appeals to collectors with a sense of adventure, and the Ho Collection Black gets my vote for its thoroughly unique construction, which combines visionary technical horological with art and poetry. Although it looks complicated, it is a back-to-basics-type of watch for HYT. Here, the ‘o’ stands for origin, featuring fuss-free design that draws focus to the brand’s hydro-mechanical time display mechanism. 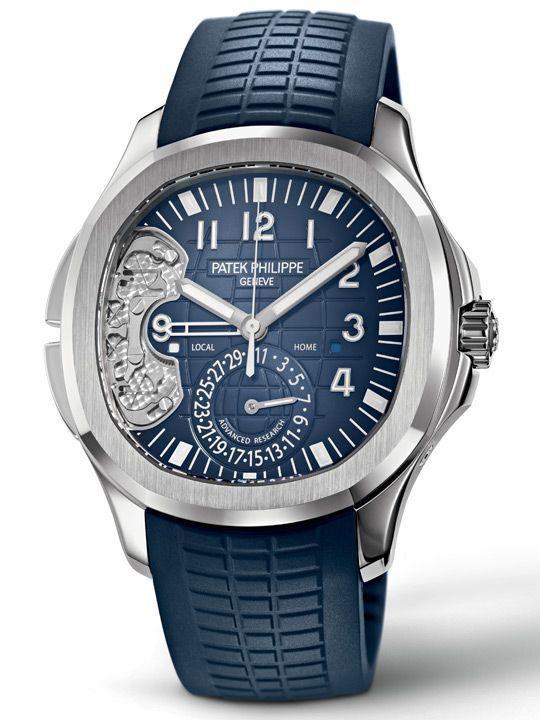 It was only on the first day of Baselworld 2017 when we saw this watch, and it has occupied our best-of top spot ever since. To be fair, this is not a watch that most people will get, both literally and figuratively. BUT this is more than a watch – it is a statement on where high-end mechanical watchmaking ought to be headed.

We won’t get into details here, but the truly forward-thinking movement construction in this watch promises unmatched precision (-1/+2 seconds a day!), and unparalleled versatility by with re-engineered steel components so that the movement requires fewer parts and eradicates the need for lubrication. As far as being a flag-bearer for the best that haute horlogerie has to offer, Patek Philippe is certainly hoisting the bar up high. 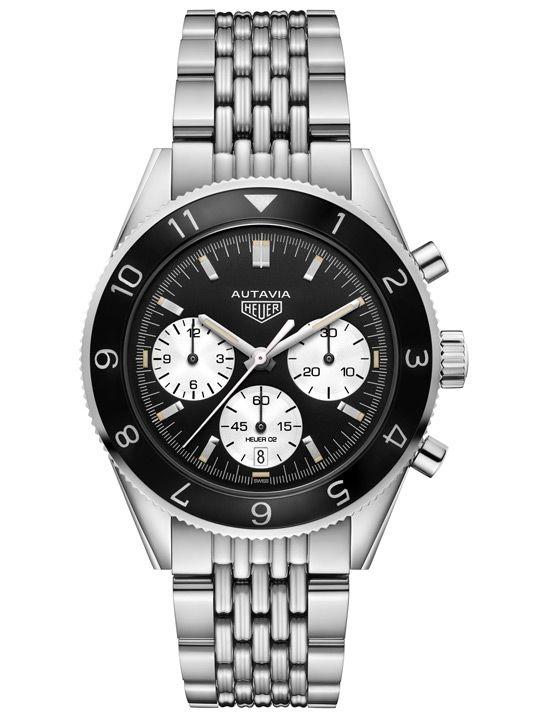 Borne of a collaboration between TAG Heuer and its fans, the Swiss marque polled collectors last year in a campaign called the ‘Autavia Cup’ to find out which of their first generation Autavia models from the 1960s they wanted to see revived. This is the result and it looks every bit a fan-favourite, inspired by the Autavia Ref. 2446 Mark 3 from 1966, christened the ‘Rindt’ as a nod to the illustrious Formula One champ, Jochen Rindt, who was almost never seen without it. 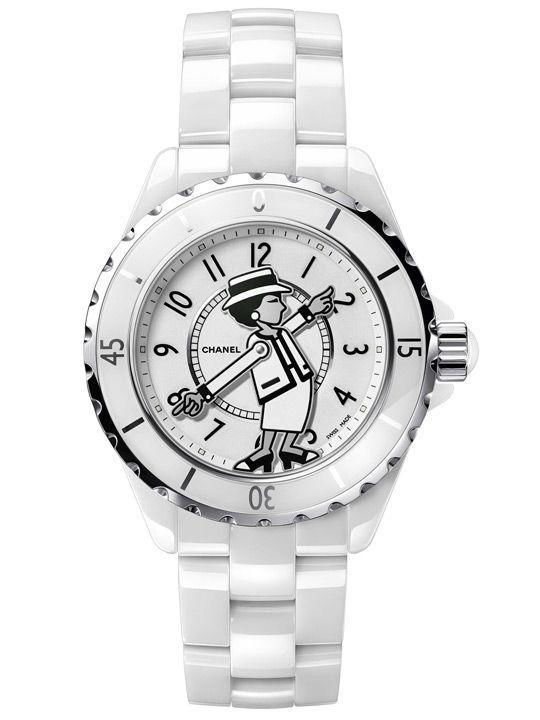 My final pick is usually reserved for watches with unique aesthetics, and this year, the Chanel Mademoiselle J12 gets my vote for putting a whimsical twist to a contemporary classic. In this 555-piece limited edition, which comes in black or white, the now-famous ceramic clad collection features a cartoon-likeness of founder Coco Chanel on the dial, her hands indicating the hours and minutes, an execution recalling Gerald Genta’s famous Mickey Mouse watch.