A Brief History Of Military Watches

While their exact origins are difficult to pinpoint, it is generally agreed that military tickers came into use by the 1880s. Officers in the British Army were known to wear wristwatches during the Anglo-Burma War of 1885. It’s also interesting to note that this period marked the first time men took to wearing wristwatches. Prior to the 1880s, only women sported them. (The world’s first wristwatch is attributed to Patek Philippe’s 1868 exemplar made for Hungarian Countess Koscowicz.) 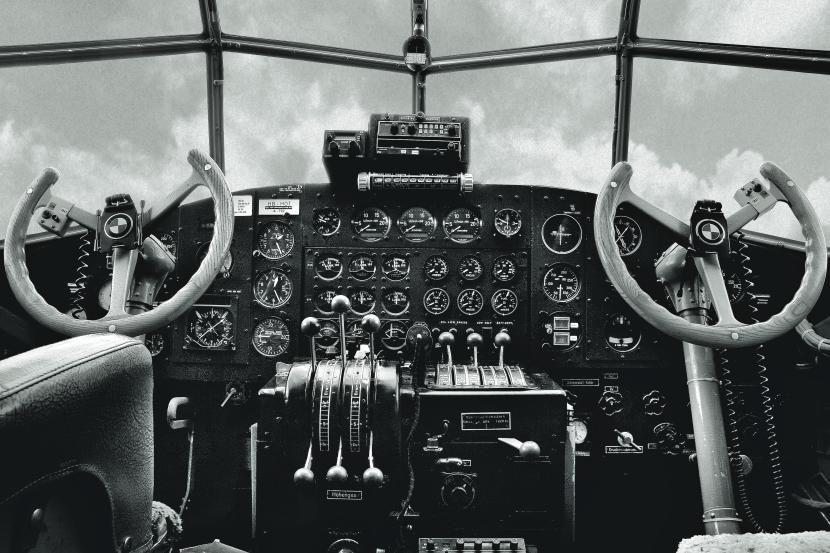 By the early 20th century, there was enough of a market for wristwatches that companies began producing them on a bigger scale. On request from the German Imperial Army, Girard-Perregaux sent a team of Swiss watchmakers to Berlin to produce wristwatches for its troops. In 1903, Swiss manufacture Dimier Frères & Cie patented the now-standard design of a wristwatch with wire lugs.

The following year, wristwatches took to the skies for the first time when Louis Cartier created a wristwatch for Brazilian aviator Alberto Santos-Dumont. The Santos, as it became known, offered integrated lugs and a leather strap fastened with a small buckle, providing a secure fit on the wrist. A bon vivant and habitué of high society events in Paris, Santos-Dumont began popularising the use of wristwatches among the fashionable set. Pictured here is a model from 1915. 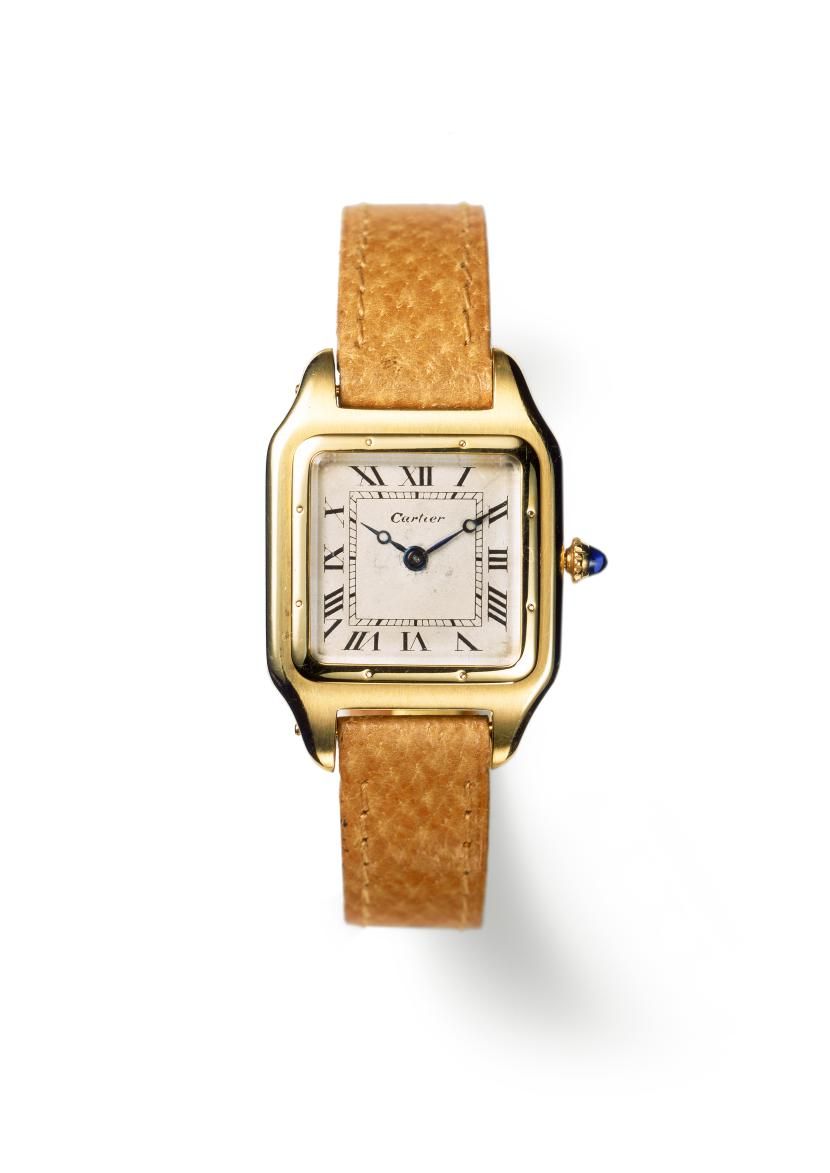 The Impact of WWI

But it was World War I that had the biggest impact on the development of wristwatches. To withstand the demands of trench warfare, innovations such as luminous dials and unbreakable glass were introduced. America’s Hamilton Watch Company became the official supplier to the US military, and issued its first such watch in 1917. Its Khaki’s pilot’s watch released during this period was wildly successful both within and without the US Air Force, with more than a million pieces produced around the time. WWI also provided the inspiration for Cartier’s Tank (pictured, from 1919), so-named because its design was based on the top view of a Renault tank. 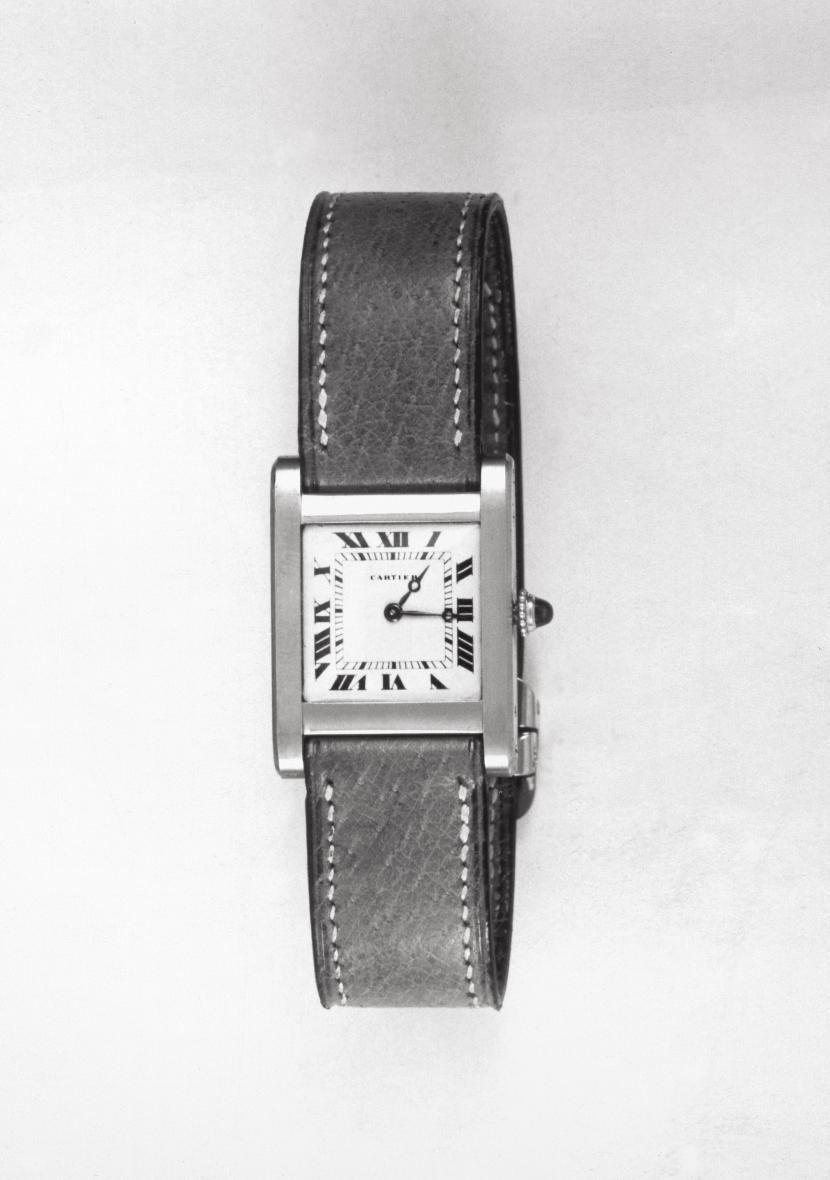 If Cartier dominated aesthetics, then Breitling presided over functionality. In 1923, the company launched the world’s first chronograph wristwatch (pictured) activated by the two-pusher system we know today: one to start/stop the watch, and another to reset the timing. 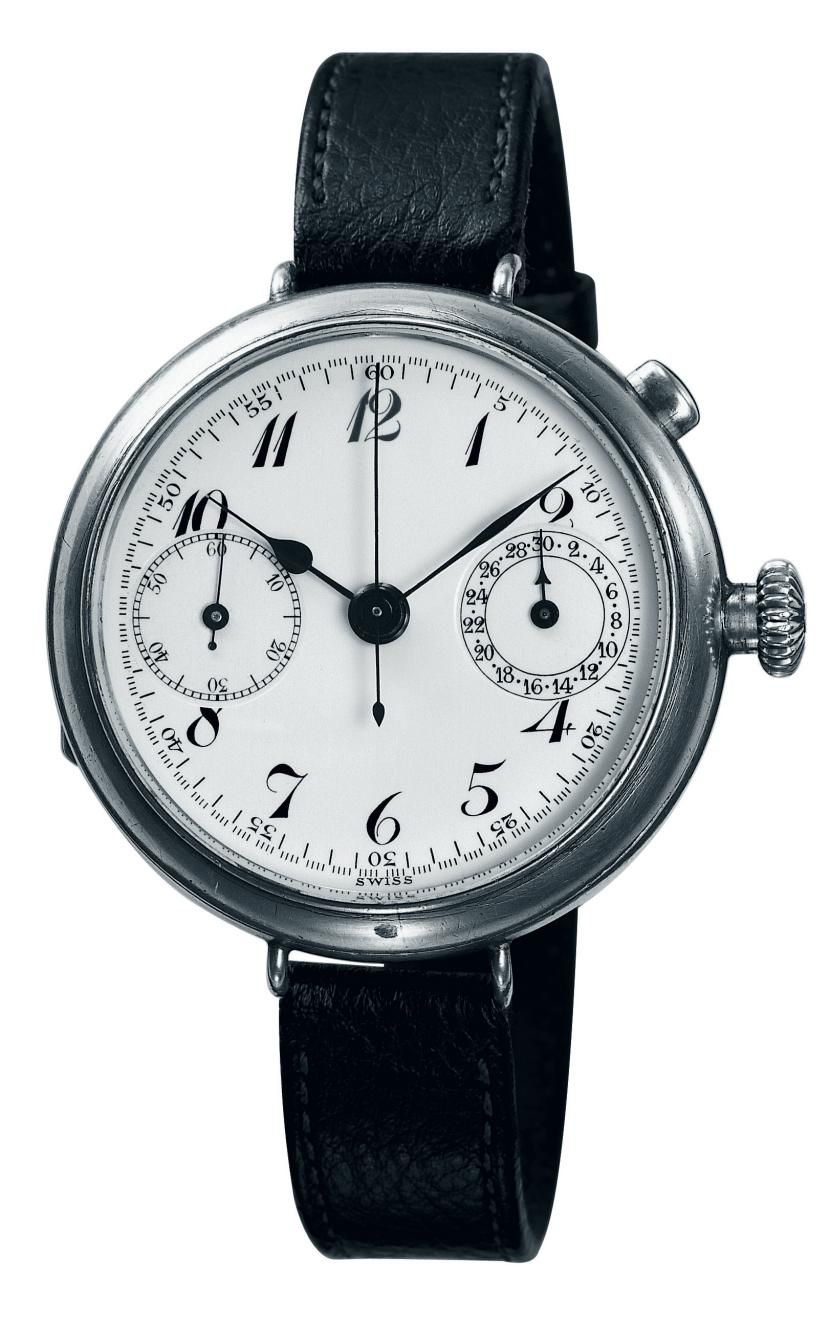 Two decades later, Breitling would cause another paradigm shift with its Chronomat, which was equipped with a slide rule bezel that helped pilots perform complex logarithmic calculations such as fuel consumption, average speeds and climbing speeds. (The Chronomat later evolved into the iconic Navitimer of 1952, pictured). The pilot’s watch had thus become an indispensable tool for aviators. 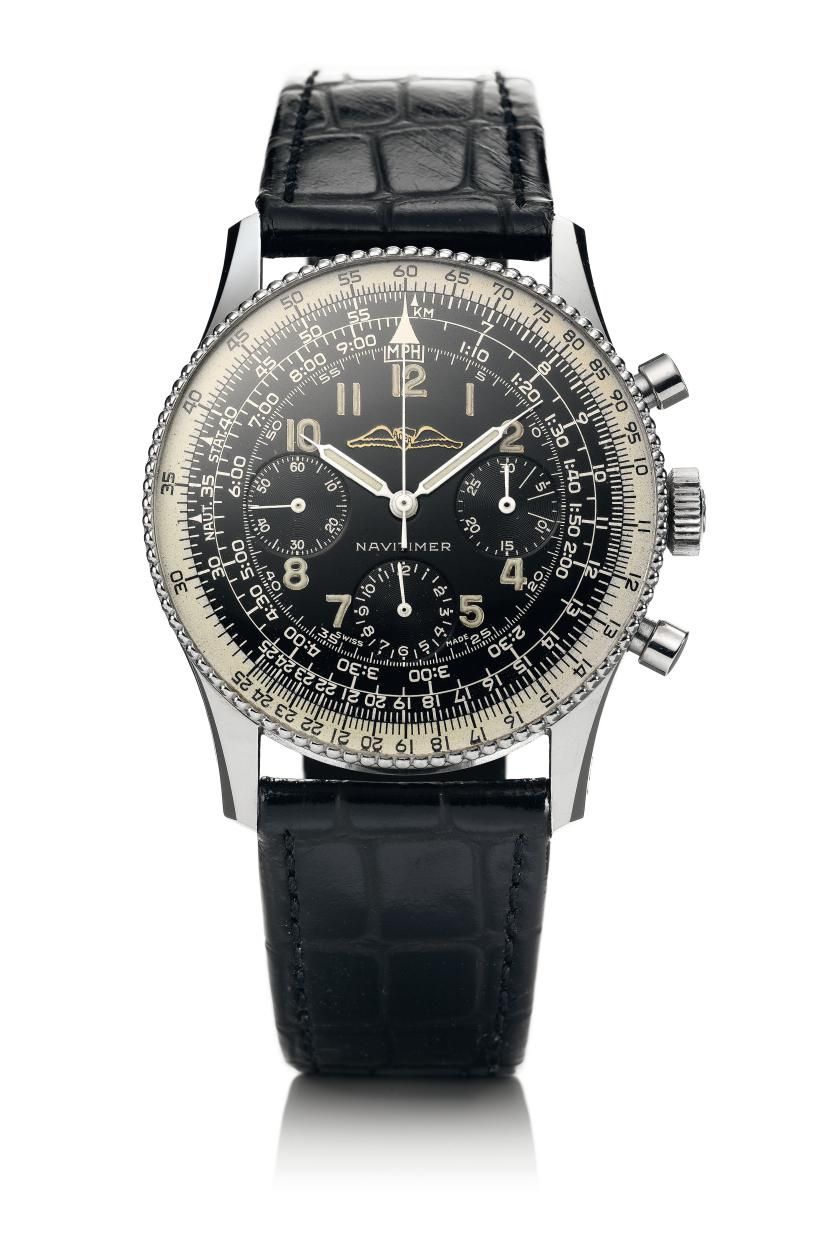 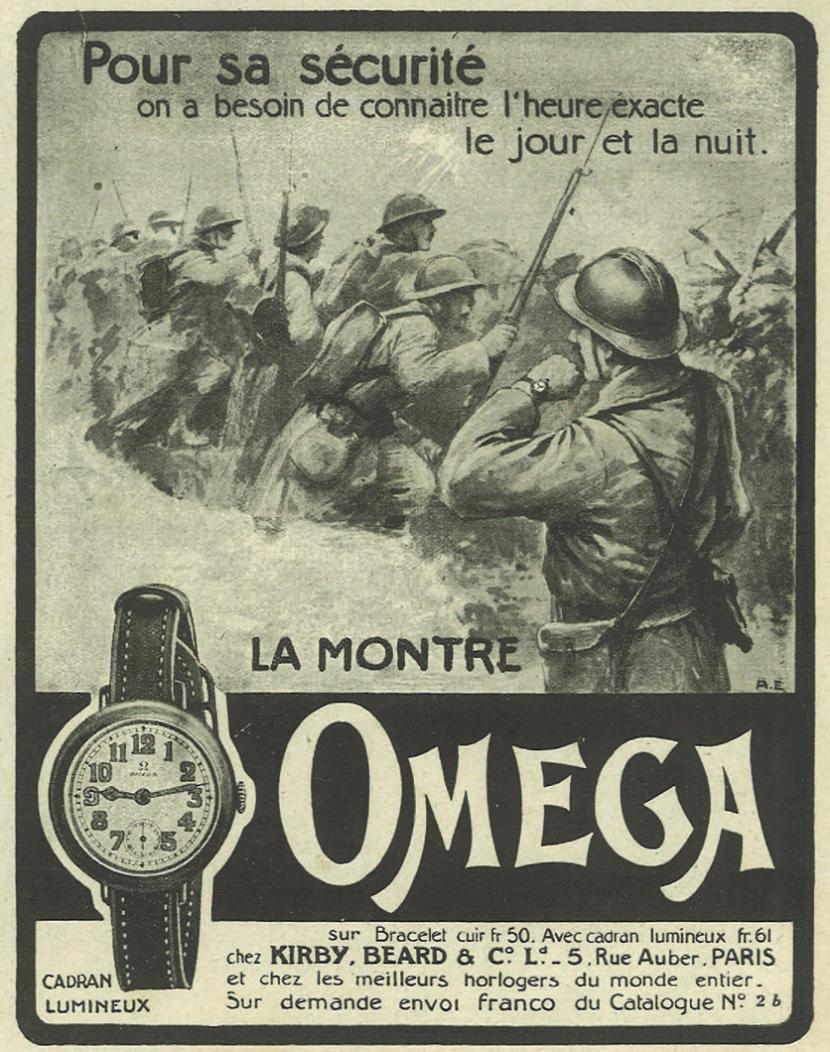 For instance, its legendary ‘Officer’ watch from the 1940s (now a collector's favorite) pioneered the look of big Arabic numerals against on a contrasting dark dial, which has become a trademark of all pilot's watches ever since. Another example is the CK2129, developed for pilots of the Royal Air Force in 1940 (pictured). The watch featured a second crown at 4 o'clock that turned a rotating bezel, which allowed the pilot to read and mark specified time intervals – an innovation that marked the birth of the famous rotating bezel for pilots watches. 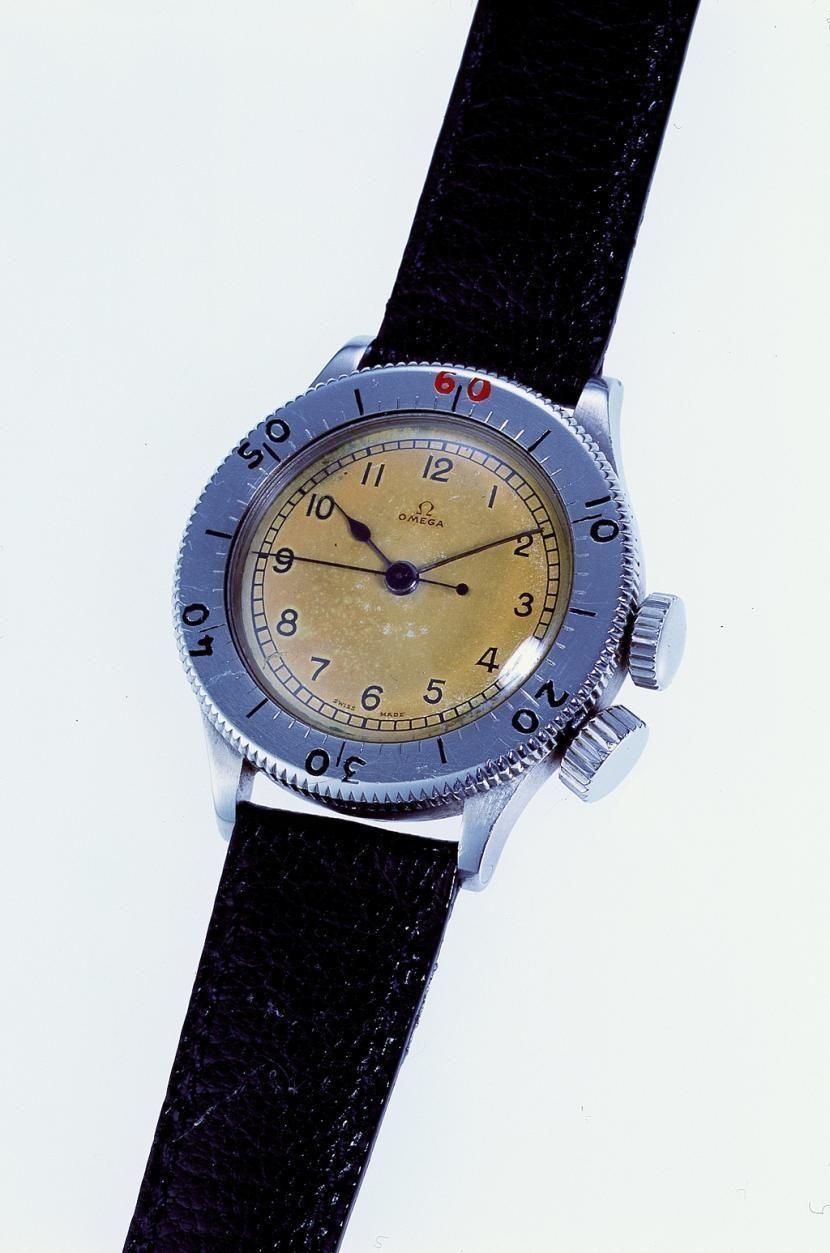 By the onset of WWII, all the major Swiss and Italian manufactures were producing military issue timepieces. IWC’s Big Pilot’s Watch was introduced in 1940, four years after the company’s first pilot’s watch (pictured). At a staggering 55mm in diameter, it was the largest ticker ever made by IWC, with a sober, reductionist dial that took inspiration from aircraft cockpit instrument 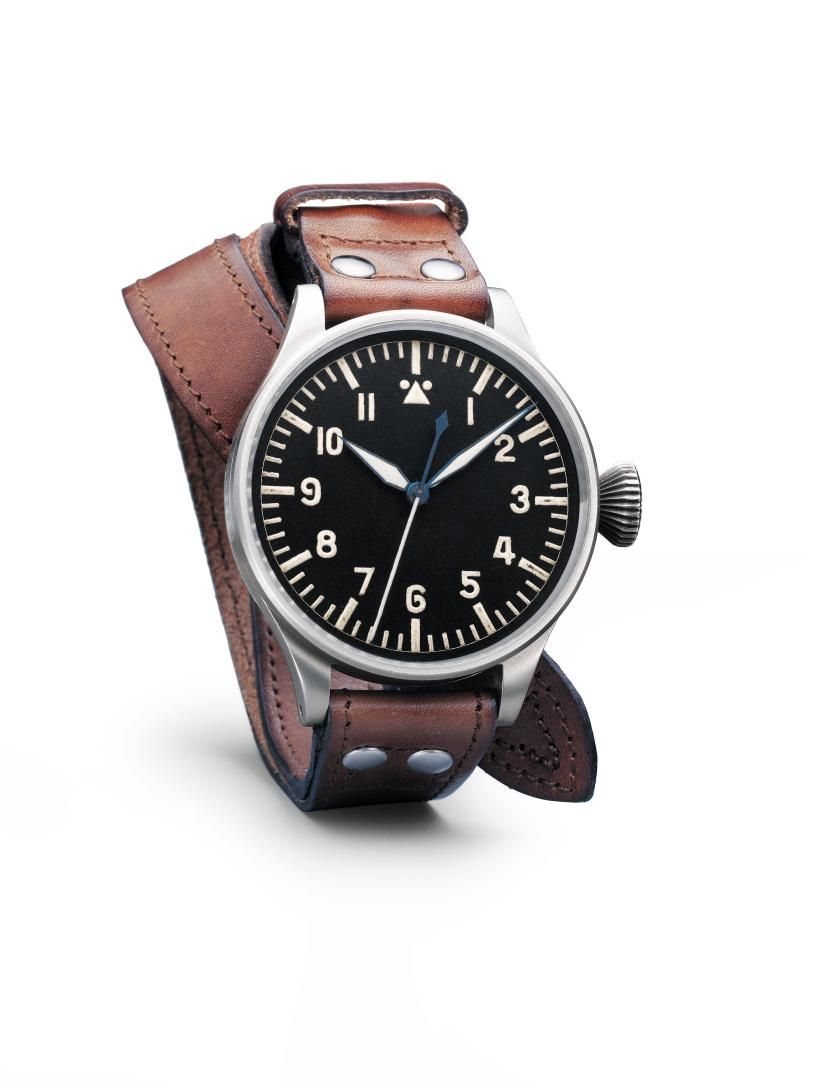 The same qualities could be used to describe the navy diving watches that emerged during this era. Panerai’s first generation Radiomir made for the Royal Italian Navy, with its screw-down case back and screw-down crown that kept the movement hermetically sealed; and a dial that offered enhanced luminescence thanks to its sandwich construction. The postwar era witnessed the birth of three diving legends: Panerai’s Lumior (1950, made for the Italian Navy, pictured), Blancpain’s Fifty Fathoms (1953, made for French Navy Seals) and Rolex’s Submariner (1954, which spawned the Military Submariner, or MilSub, in 1957 that was issued to the British Navy). In addition to their waterproofness, the latter two boasted graduated scales that allowed divers to keep track of the elapsed dive time and hence, their air supply management. In the absence of dive computers, this feature was pivotal in ensuring the divers’ safety while aiding the coordination of their underwater missions. 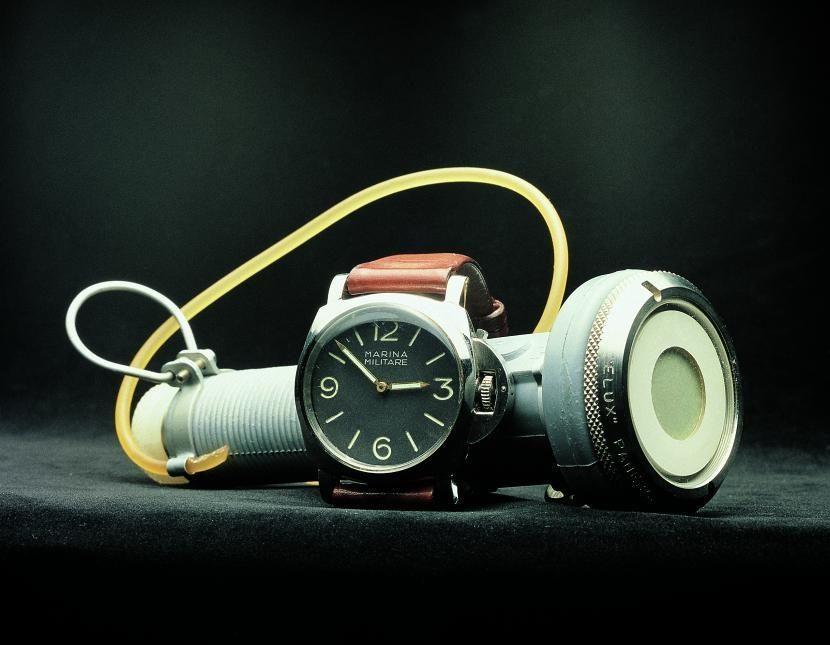 From the 1950s to the 1970s, military watches made the leap into the civilian world, propelled by popular dive models such as the trio mentioned above. Thanks to their utilitarian qualities, the watches were a hit with both professionals (scientific researchers, explorers) and recreational users (leisure divers). Today, watch companies continue to tap into that spirit of utilitarianism when designing their military or military-styled watches. Bell&Ross is famous for its aviator watches that resemble cockpit instruments from modern aircraft as well as early 20th century planes. Simplicity seems to be the key to why military and military-styled watches continue to endure. Robust and readable, they bear the most important information for the specific task.

There is just an unmistakable honesty to military-inspired utilitarianism.