10 Modern Mechanical Movements You Must Know

From industry-standard workhorses to epochal calibres, here are the movements that shaped modern watchmaking. 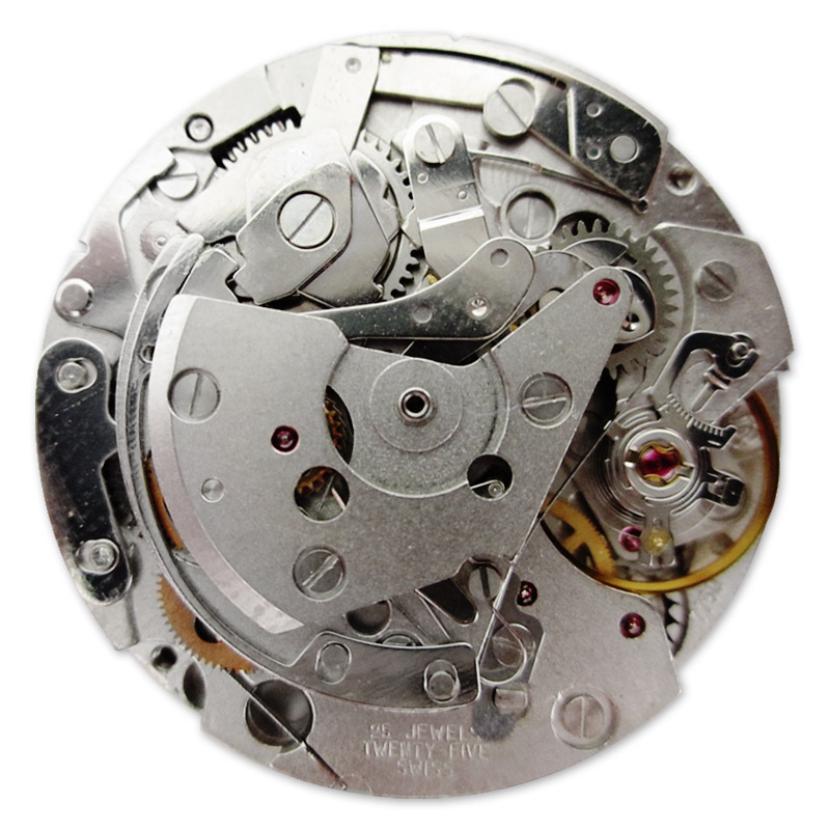 History: The Valjoux 7750 was launched in 1974, just as the quartz crisis hit the Swiss watch industry. It was discontinued a few years later, and then revived in the mid-1980s as the industry recovered. By the late 1990s, it had proven to be a stable, reliable and durable workhorse. Today it’s the world’s most popular automatic chronograph movement.

Technical Highlights: The 7750 is supplied in both 21,600 vph (3Hz) and 28,800 vph (4Hz) versions, and features a unidirectional winding rotor. Significantly, it employs a heart piece limiter instead of the more complex column-wheel mechanism to ensure precision, which lowers its production cost. This was the primary reason for its widespread adoption, and also the leading factor in the democratisation of mechanical chronograph watches as previously, only a select few brands could afford them. 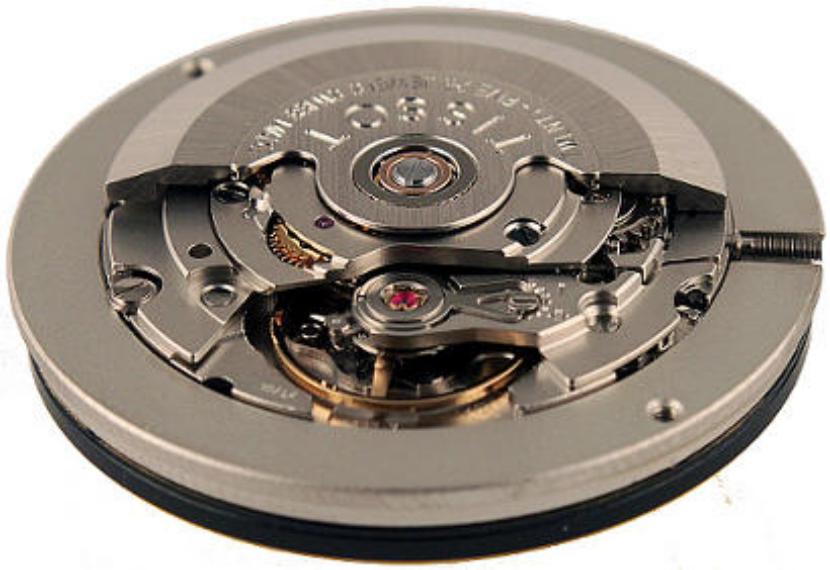 Technical Highlights: The 2824-2 comes in four grades: 'Standard', 'Elaborated', 'Top' and 'Chronometer'. What differentiates the various grades are the quality of the finish (nickel or rhodium, the latter being the more durable and expensive); the degree of decoration; and the quality of the components. In terms of rate accuracy, the 'Standard' grade has a maximum daily variation of +/-30 seconds/day; 'Elaborated', +/-20 seconds/day; and 'Top', +/-15 seconds/day. The 'Chronometer' grade is aligned with the limit set by the COSC, i.e. -4/+6 seconds/day. 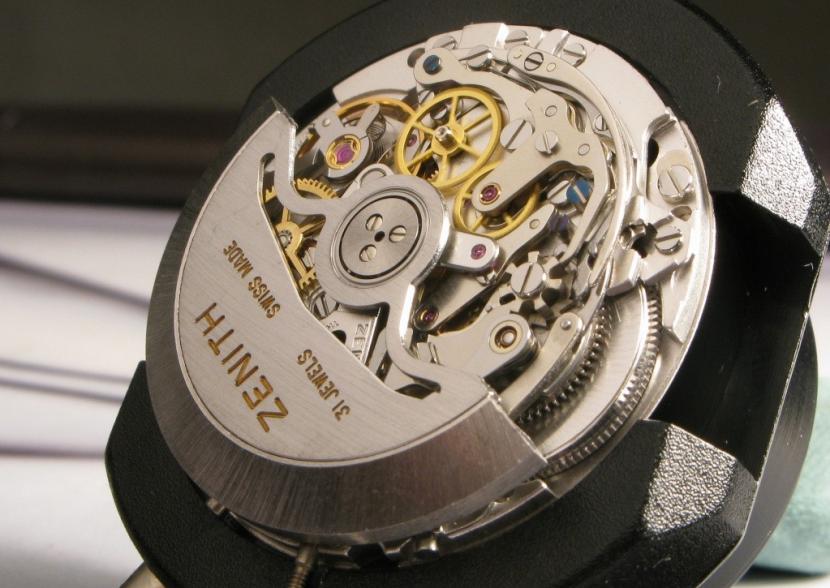 History: Zenith’s 3019 made its debut in January 1969, after seven years of research and development. As the world’s first fully integrated automatic chronograph – it pipped Calibre 11, developed by a consortium comprising Breitling, Dubois-Depraz, Hamilton-Buren and Heuer, by just two months. Its nickname “El Primero” means “The First”.

Usage: Until 2000, a modified El Primero powered the much-vaunted Rolex Daytona. Today, the calibre is produced in more than 20 versions and resides across Zenith’s various lines, as well as in Bvlgari’s Octo Velocissimo and Hublot’s Spirit of Big Bang.

Technical Highlights: Beating at 36,000 vph (5Hz), the El Primero was the world’s fastest at the time of its debut (compared to Calibre 11’s 19,800 vph), the speed allowing it to measure timings of up to 1/10th of a second. The movement uses a traditional column-wheel mechanism. Variations to the basic chronograph calibre include a triple calendar complication with moonphase indication. 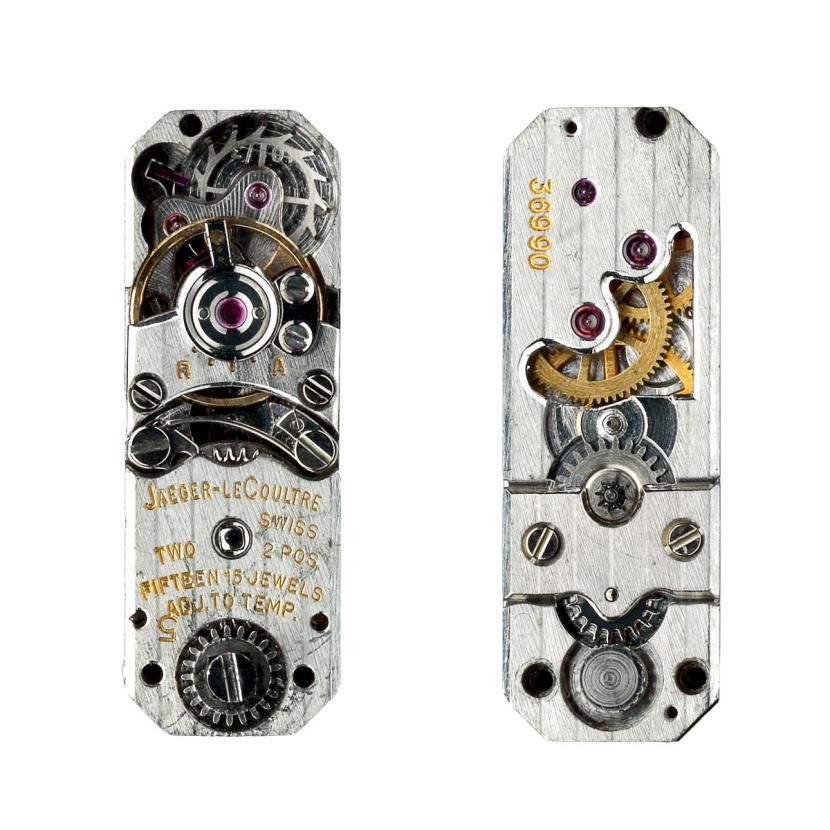 History: That Calibre 101, unveiled in 1929, is still the world’s smallest manual-winding mechanical movement (14 x 4.8 x 3.4mm). Nothing short of a horological marvel, it evolved from an earlier prototype, the LeCoultre Duoplan of 1925, which proved that miniaturisation and precision could go hand-in-hand. (It is believed the smaller the calibre, the less reliable it tends to be.)

Usage: Because of its dainty proportions, Calibre 101 lends itself best to Jaeger-LeCoultre’s feminine timepieces as well as high jewellery watches. England’s Queen Elizabeth II famously wore a Calibre 101 timepiece for her coronation in 1953. A men’s version, the Grande Reverso 101 Art Deco, was introduced in 2010.

Technical Highlights: Calibre 101 consists of 98 parts (74 in the original) arranged in a linear configuration (baguette) and weighs a grand total of one gram. Owing to the complexity of its manufacture, only a few examples are made each year. History: Five years in the making, Calibre 3120 was introduced in 2003 as an automatic winding three-hander with stop-seconds function and instantaneously jumping date.

Usage: Several models in Audemars Piguet’s flagship Royal Oak collection are powered by the 3120, including the 41mm model (reference 15400). The Royal Oak Offshore Diver, too, is governed by this workhorse engine.

Technical Highlights: Oscillating at a cadence of 21,600 vph (3Hz), Calibre 3120 is wound by a bidirectional 22K gold rotor that ensures a power reserve of 60 hours. What’s unique is the date mechanism, which is equipped with a safety feature that blocks the date disc in the event that a user decides to manually reset the date at midnight. 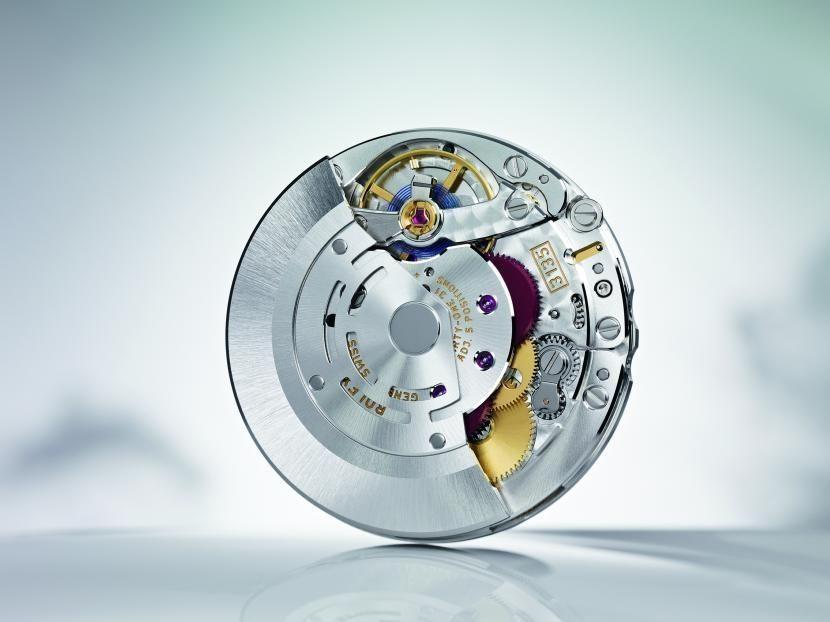 History: Launched in 1988, the automatic Cal. 3135 is Rolex’s workhorse movement that has seen numerous upgrades over the years, such as the addition of the Parachrom hairspring to enhance performance and reliability.

Usage: Arguably the most ubiquitous of Rolex’s movements, the Cal. 3135 is a three-hander with date. It powers everything from the classical Datejust to the sporty Deepsea, Submariner Date, Sea-Dweller and Yacht-Master.

Technical Highlights: With a frequency of 28,800 vph (4Hz), the calibre is equipped with a bidirectional winding Perpetual rotor that is a descendant of the automatic winding system invented by Rolex in 1931. Fully wound, the movement generates a power reserve of about 50 hours. 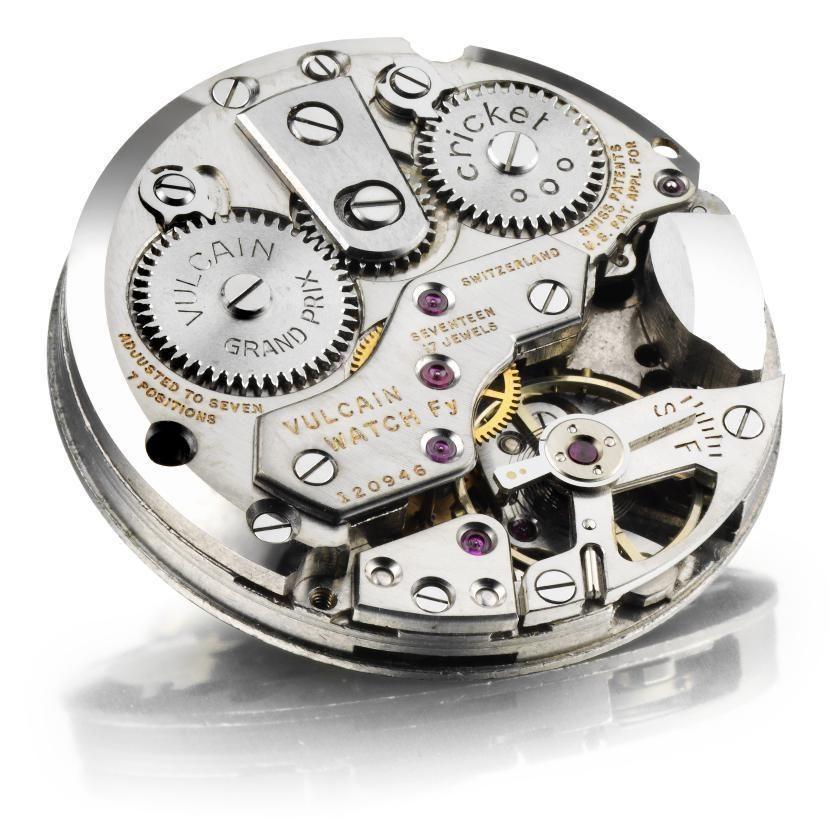 History: Vulcain premiered its mechanical alarm movement for the wristwatch in 1947. Calibre 120, which took five years of research and development, was affectionately nicknamed the “Cricket” because the sound it produced was reminiscent of that insect.

Usage: During Vulcain’s heyday from the 1950s to the 1970s, its alarm watches were worn and popularised by American presidents Dwight Eisenhower, Lyndon B. Johnson, Richard Nixon and Harry S. Truman. In 2009, Vulcain gifted president Barack Obama with a Cricket. The movement, now known as the V-10, is currently available in eight variations and is used across Vulcain’s portfolio. 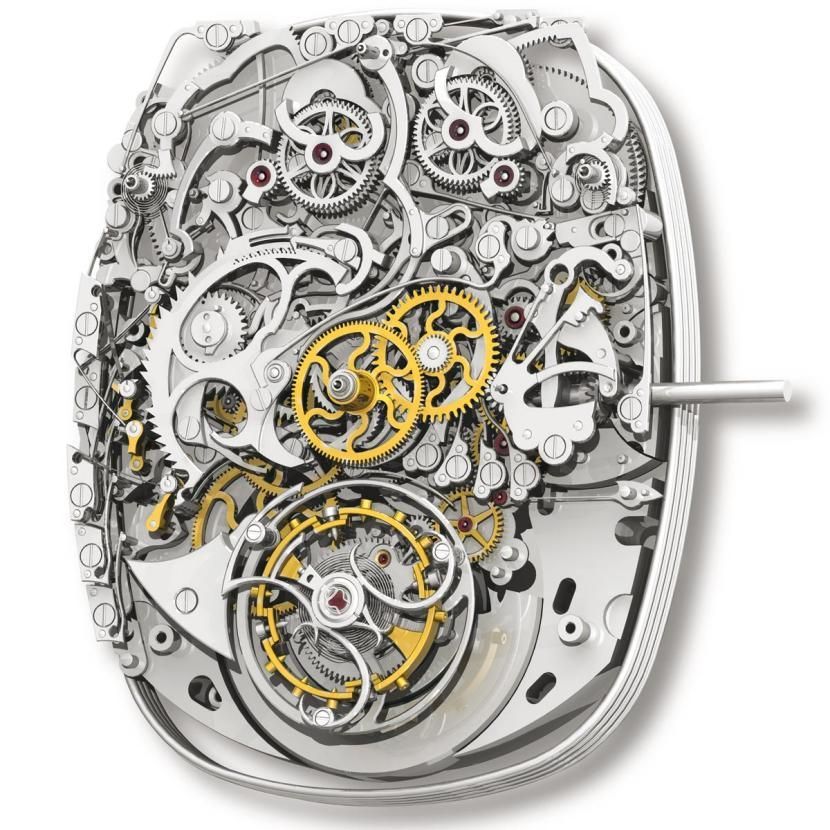 History: Franck Muller’s aim with the Aeternitas Mega 4 was to create the world’s most complicated wristwatch, using all the complications known to man, packed into a case that’s meant to be worn comfortably on the wrist. It took five years to produce, and was unveiled in 2010.

Usage: The movement is only used in the watch of the same name.

Technical Highlights: The calibre comprises 1,483 components and houses 36 complications (25 of which are visible), including a tourbillon, Westminster carillon on four hammers and four gongs, monopusher flyback chronograph, perpetual calendar, equation of time, two extra time zones, and automatic winding with three days of power reserve. The balance throbs at a classical 18,000 vph (2.5Hz), which enhances the pleasure of watching the tourbillon spin. 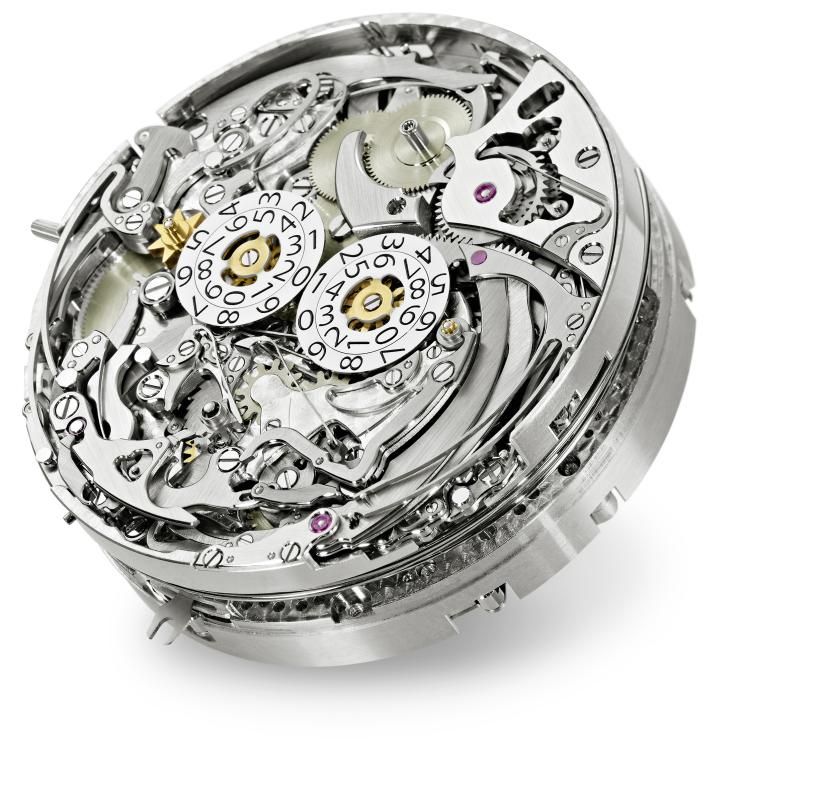 History: Calibre 300, housed in the Grandmaster Chime, is the most complicated wristwatch ever made by Patek Philippe on the occasion of its 175th anniversary in 2014. It took seven years to develop and two years to produce.

Usage: The movement is only used on the Grandmaster Chime.

Technical Highlights: Twenty complications are accommodated on two dials. They include an instantaneous perpetual calendar, a minute repeater, Grande and Petite Sonneries, plus never-before-seen innovations such as a striking alarm and a date repeater that chimes the date on demand, as well as a striking alarm that replicates the exact tone, sequence and quality of the minute repeater. Four barrels drive the 1,366-part movement, with two barrels expressly dedicated to the striking mechanisms alone. Calibre 300 beats at 25,200 vph (3.5Hz). History: Unveiled in 2013, the 23rd ultra-thin calibre from Piaget is housed in the Altiplano 900P, which currently holds the title of world’s thinnest hand-wound movement with a height of 3.65mm.

Technical Highlights: To free up space, the 145-part movement was essentially built on the back of the case, which became the baseplate. There is no dial in the traditional sense; the hands are directly integrated onto a bridge which doubles up as a dial. The gear train, too, was spread out horizontally to fit within the scant space. Calibre 900P beats at a frequency of 21,600 vph (3Hz) and has a power reserve of 48 hours.