The Classic Fusion Takashi Murakami All Black is also shaping up to be a collector's item. 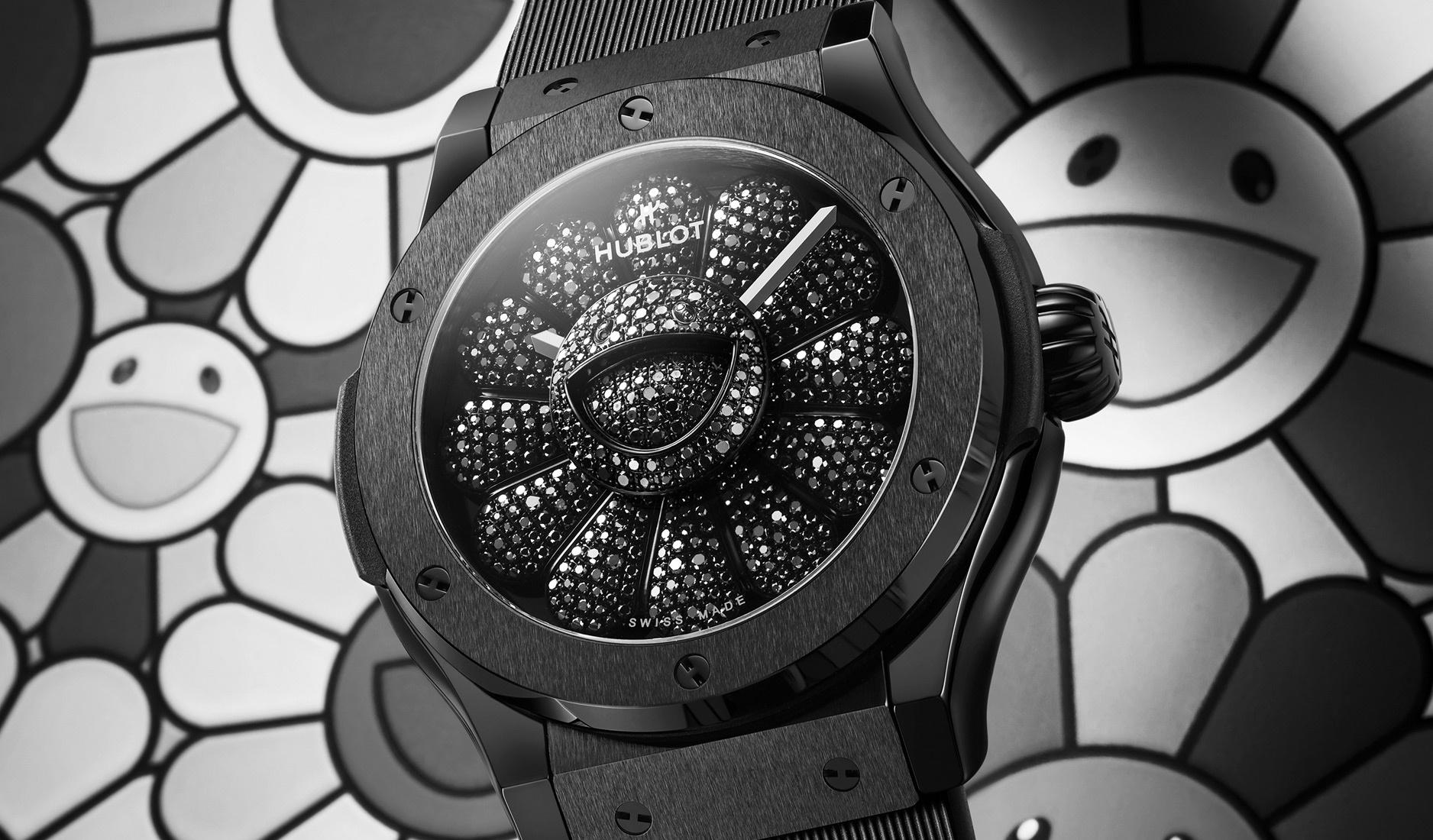 ‘Cute’ isn’t really a word that one’d use to describe a Hublot watch, but you can trust Takashi Murakami to infuse a whole lot of kawaii-ness into anything he touches. The famed Japanese artist, known for his brightly coloured anime-style artworks, never fails to sprinkle his brand of joy dust on everything he touches, whether Louis Vuitton bags, Vans sneakers or Kanye West’s album cover. 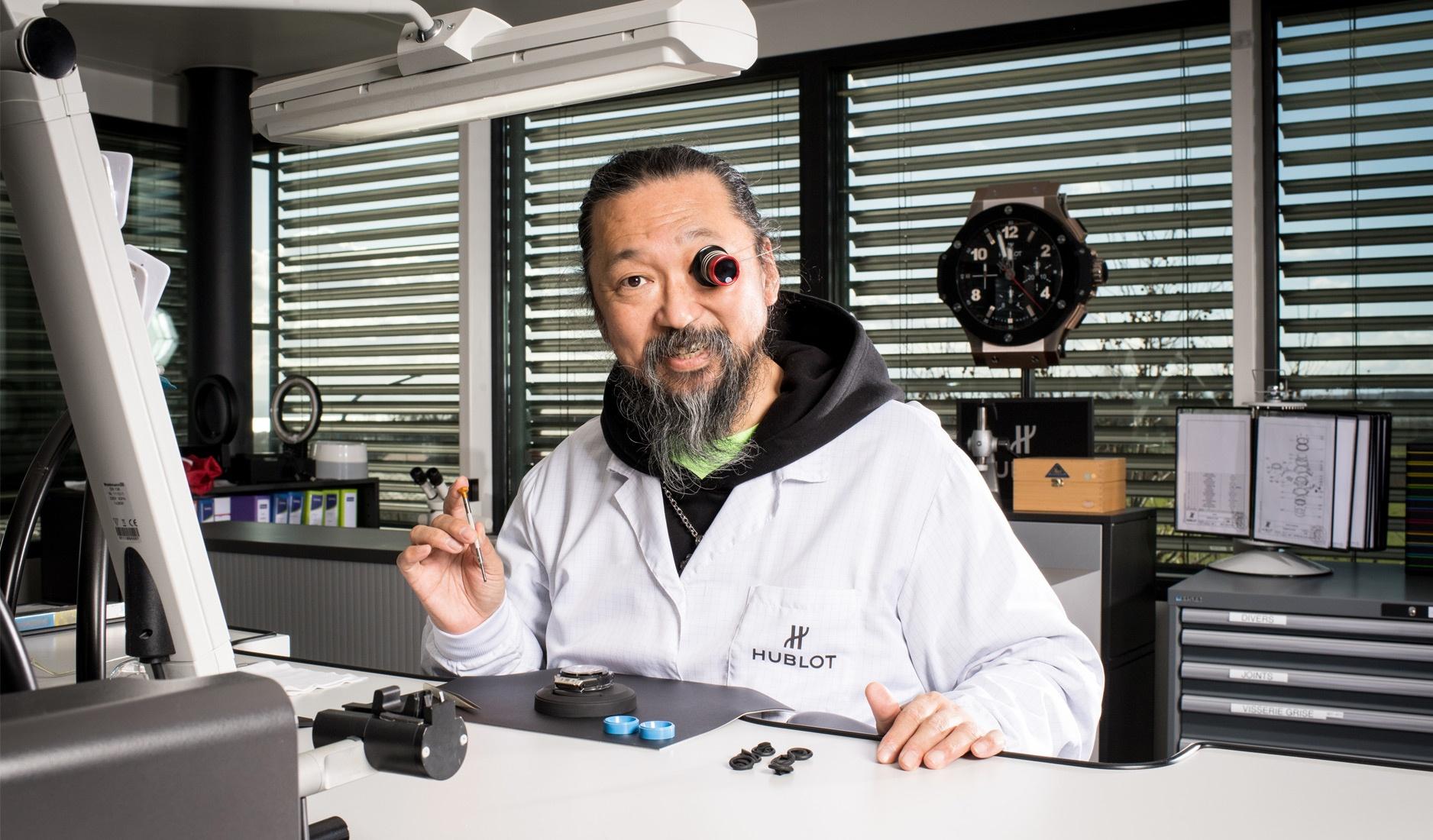 So, when Hublot decided to enlist Murakami to work on one of its most enigmatic series of watches, the All Black, you just know that it is going to turn out bright and cheery, despite the collection’s natural disposition.

Like its predecessors, the Classic Fusion Takashi Murakami All Black, which is limited to 200 pieces, doesn’t compromise its monochromatic mission. Being a Murakami collaboration, however, the series’ trademark dark, brooding sexiness is now replaced by capricious cheer and, dare we say, an overwhelming cuteness that would otherwise be impossible to imagine on an All Black watch. 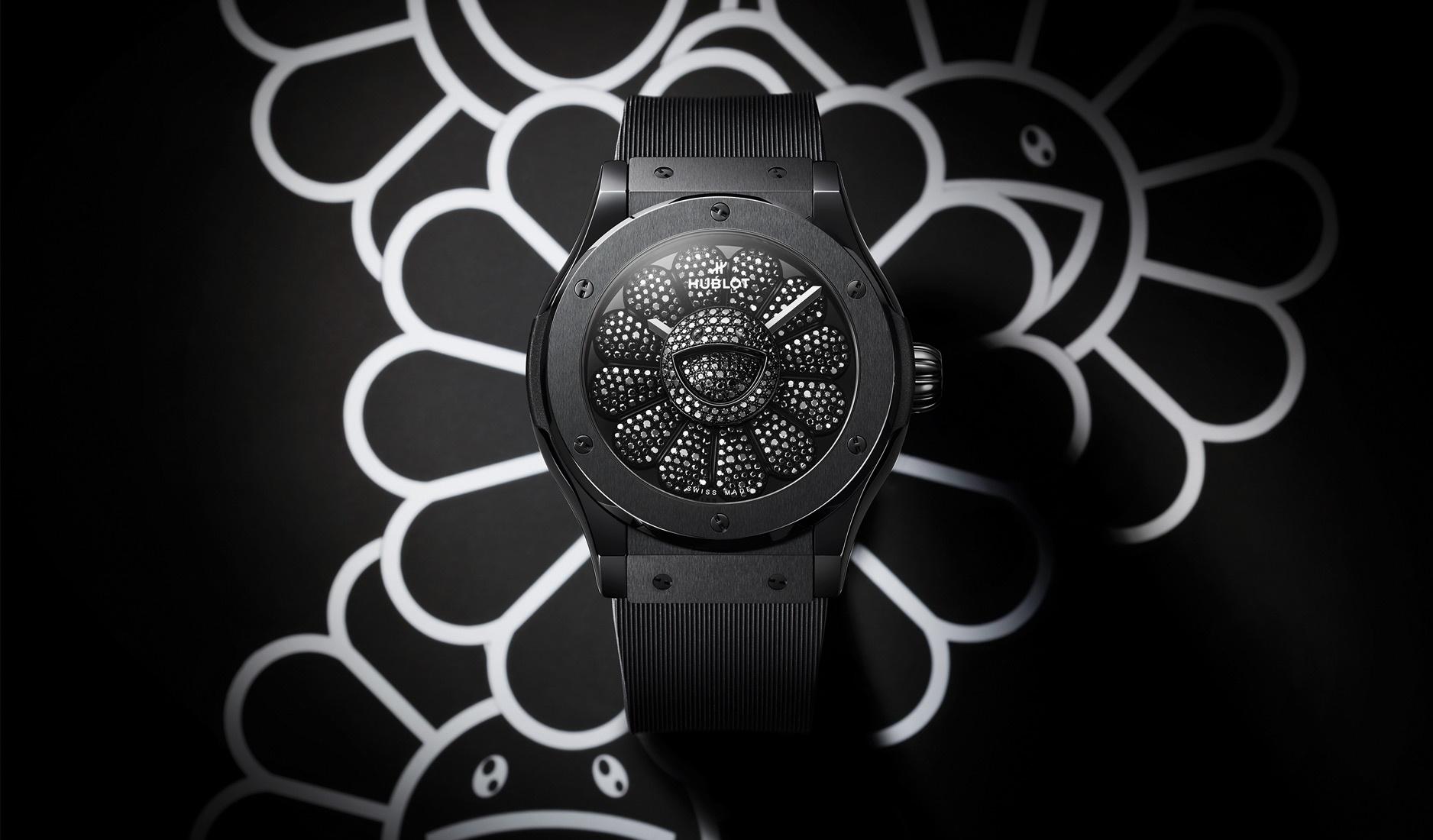 Instead, Murakami goes to work on the watch’s largest piece of canvas, planting his most iconic motif on the dial. Beaming at you whenever you check the time is Murakami’s famous 12-petal daisy, its pistil depicted as always by a huge smiley face. Instead of the artist’s signature use of bold colours, the motif is enlivened by 563 brilliant-cut black diamonds that catch and reflect light in a grand show of luxe, as well as petals that spin at the slightest flick of the wrist. 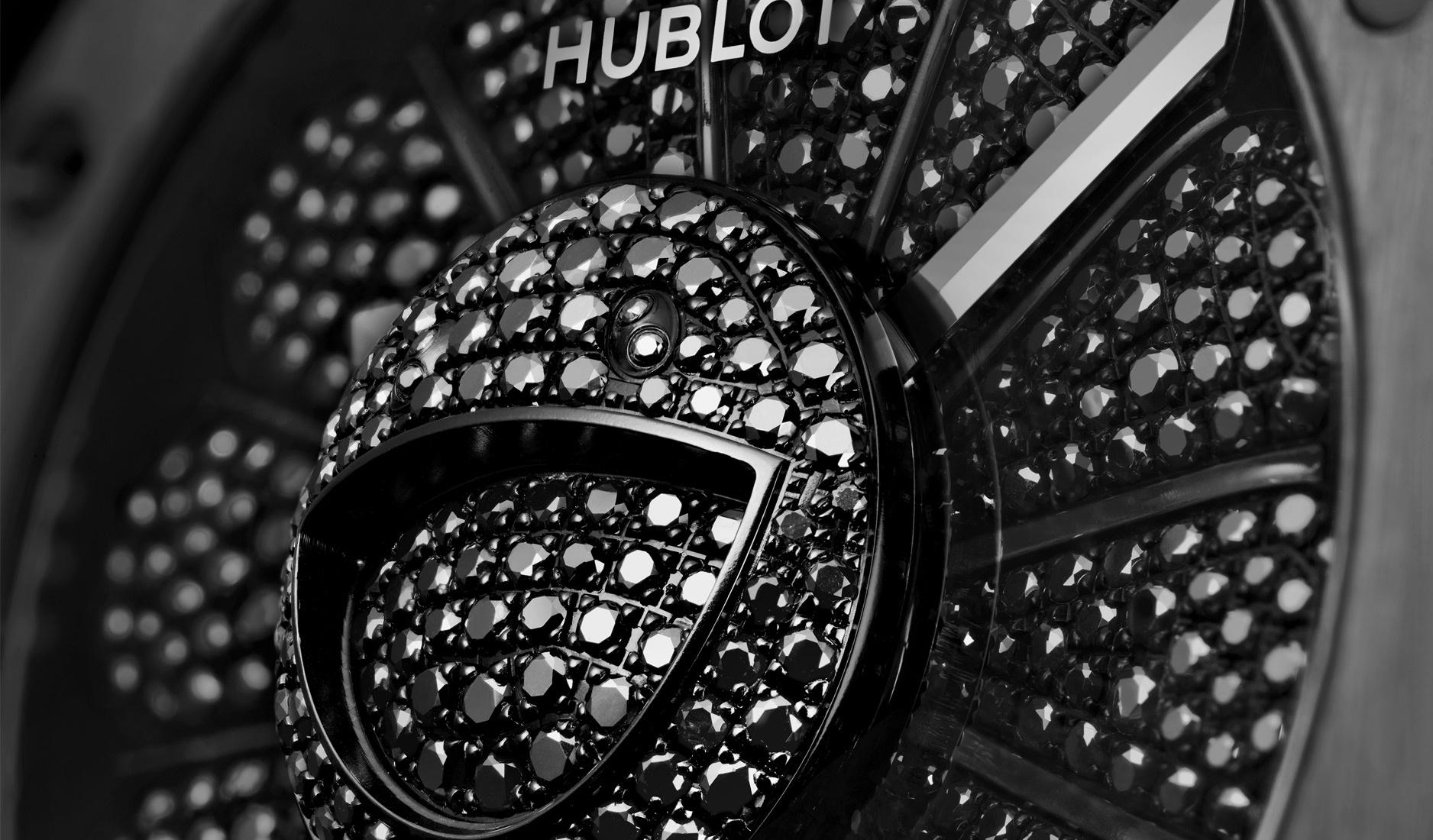 The rotating petals are mounted on a plate and pivoted around a ball bearing system, while the ‘smiley face’ is inserted separately in the sapphire glass. Meantime, the hour and minute hands are sandwiched between the two; a well-worked dial architecture that lends a three-dimensional appearance to the motif.

Although Murakami operates pretty much in the realm of contemporary art, he was actually trained in the Nihonga style of traditional Japanese painting and even earned a Ph.D. in the subject. Eventually, a combination of feeling stifled by tradition, his passion for anime, desire to explore the legacy of the two-dimensional Japanese art, and drive to blur the lines between ‘high’ and ‘low’ cultures, led Murakami to establish his trademark aesthetic, which he appropriately calls ‘Superflat’. 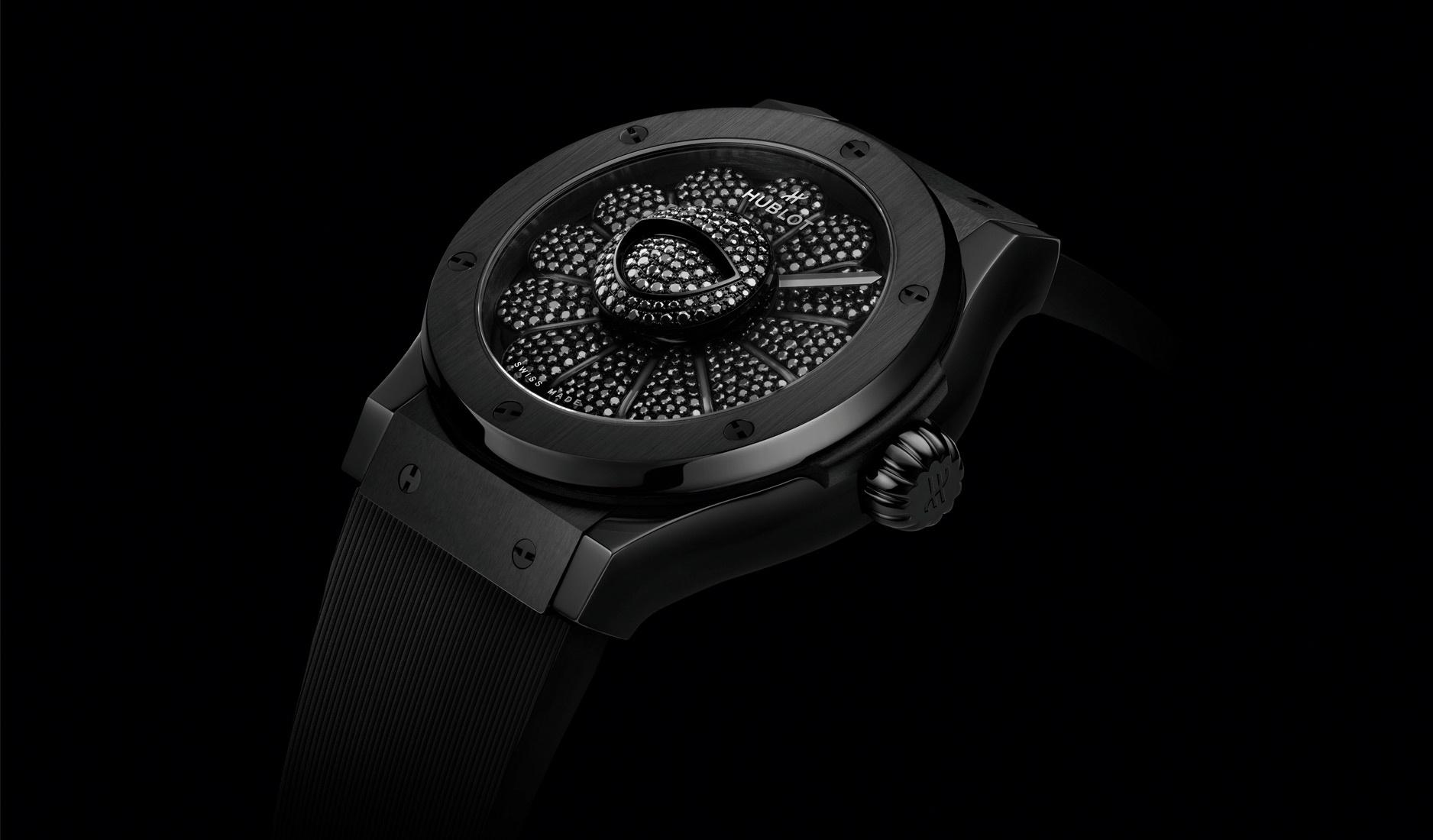 While Hublot is no Murakami of the watch world – the brand’s approach is something else altogether – parallels can certainly be drawn between the two. The watch company’s own ‘Art Of Fusion’ concept, centred on material experimentation and combination, as well as its swashbuckling approach to aesthetics and technical innovation, find it treading and blurring the lines between what is acceptable or not in high-end horology. Not unlike a cartoon Murakami flower on a luxury watch.