The iconic Arceau gets refreshed.

Forty is the new… well, never mind. At Hermès, time is kind of malleable anyway. So on the occasion of the 40th anniversary of the Arceau, the French maison updates the iconic watch with a contemporary look, which makes the timepiece look the most modern than it has been in years.

You can spot an Arceau five paces away, thanks to the watch’s distinctive case. The timepiece, famous for its asymmetrical lugs inspired by stirrups and a sloping front, was introduced in 1978, designed by Hermès’ legendary artistic director Henri d’Origny. The design proved to be so enduring that it has remained largely unchanged in the past 40 years, and the Arceau has been home for many of Hermès’ most important models, including complications like the Arceau Le Temps Suspendu and the Arceau Lift Tourbillon. 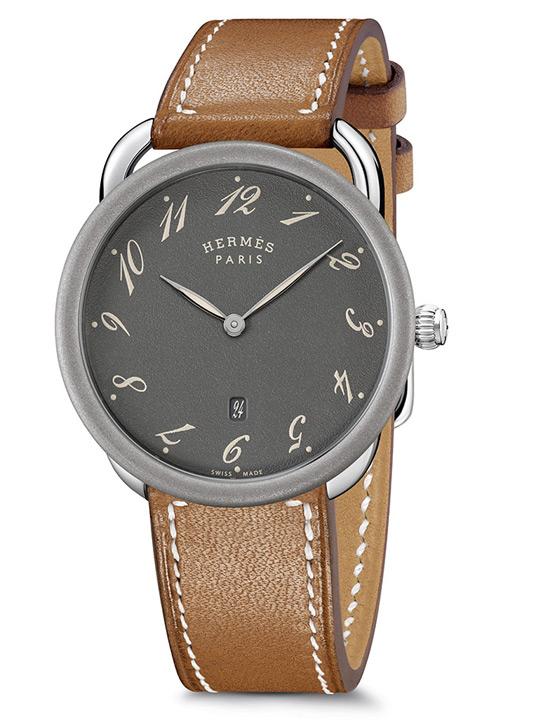 For its SIHH 2019 pre-release, Hermès upsizes the Arceau with a 40mm case and dresses it in a grey-and-beige combination that gives the watch a bit of extra oomph in the design department. What really makes the Arceau 78 stand out is the bead-blasted finish on the bezel and anthracite dial.

The industrial-style treatment accords the watch a modern and casual look, and contrasts beautifully with the polished lugs, beige indicators and brown Barenia calf leather strap. We would’ve loved the watch even more if it came with an automatic movement, but we suppose the quartz module that allows designers to make the case a bit more svelte. That said, there is no doubting the Arceau 78’s iconic stature and Hermès-sized chic.