Hermès Arceau Into The Canadian Wild: Singapore Price And Review

Hermès depicts nature at its most majestic. 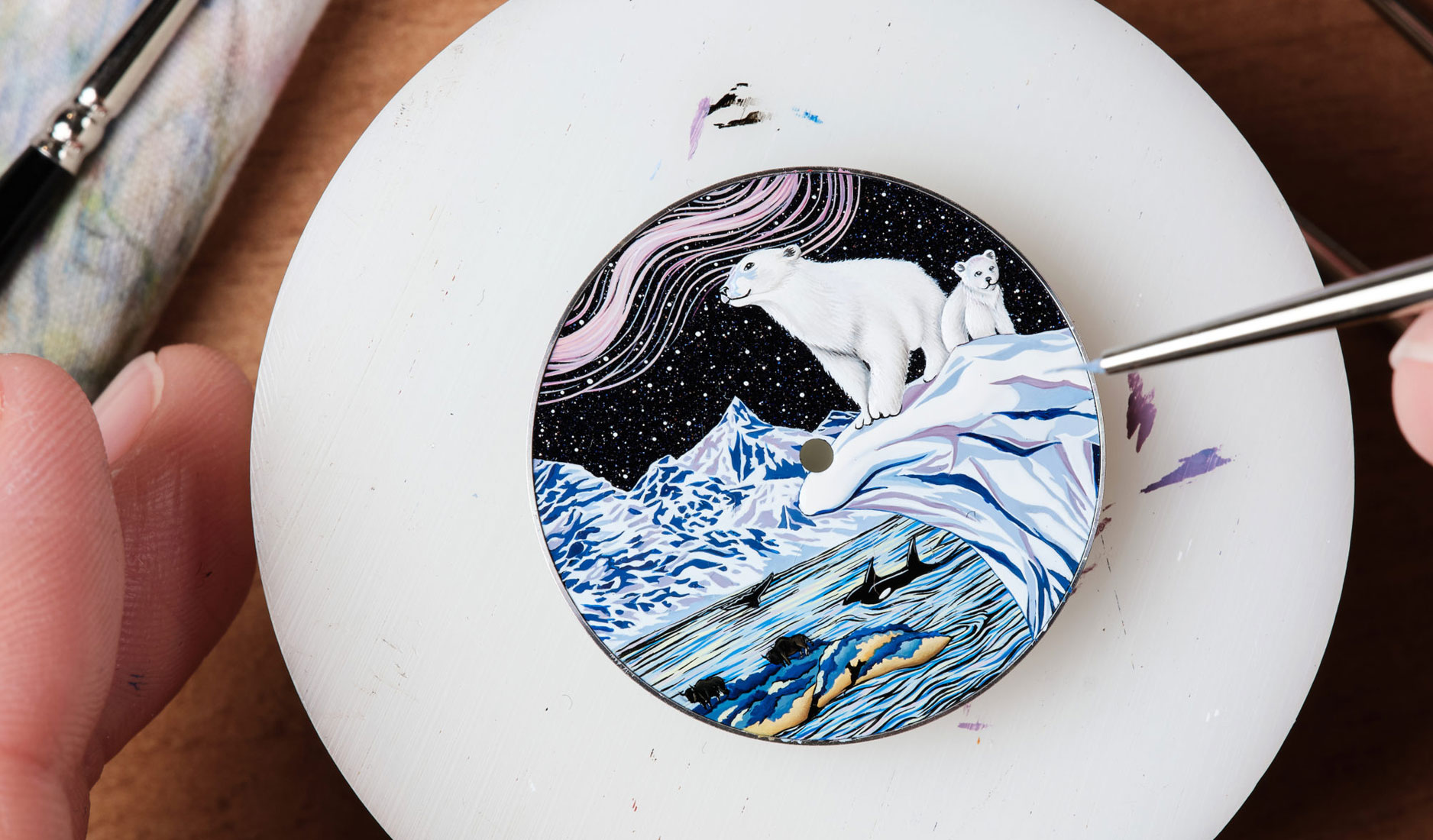 Nine months into a global pandemic (at the time writing) and we’re pretty sure cabin fever has hit you like it’s hit us. So while we’re unlikely to be making travel plans for the foreseeable future, all we can do now is binge-watch Street Food and travel vicariously through any means possible. Like maybe staring into the depths of the Canadian wilderness through a stunning métiers d’art dial.

If there’s one thing Hermès is known for, it’s craftsmanship that defies limits of human dexterity. Whether in bags, scarves or watches. We’re certainly treated to that painstaking handiwork in the new Arceau collection, which features two models with miniature paintings on an aventurine dial. 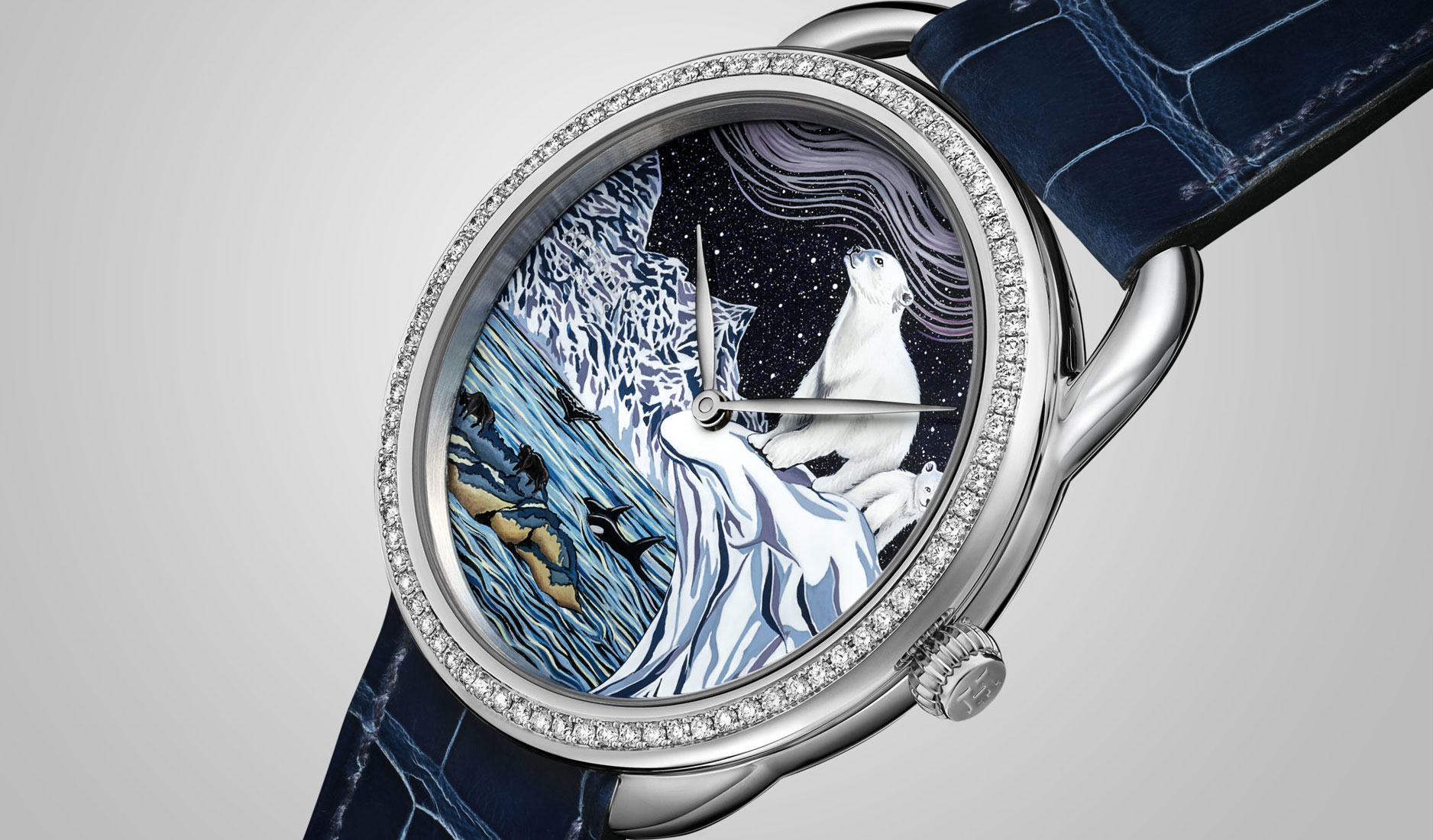 Christened ‘Into the Canadian Wild’, the watches incorporate designs from the similarly named silk scarf from 2017, created by British artist Alice Shirley to commemorate Canada’s 150th birthday. A polar bear and its cub grace one of the dials while, in the moonphase version, a snowy owl (Quebec’s avian emblem) glides across a backdrop of the Northern Lights. 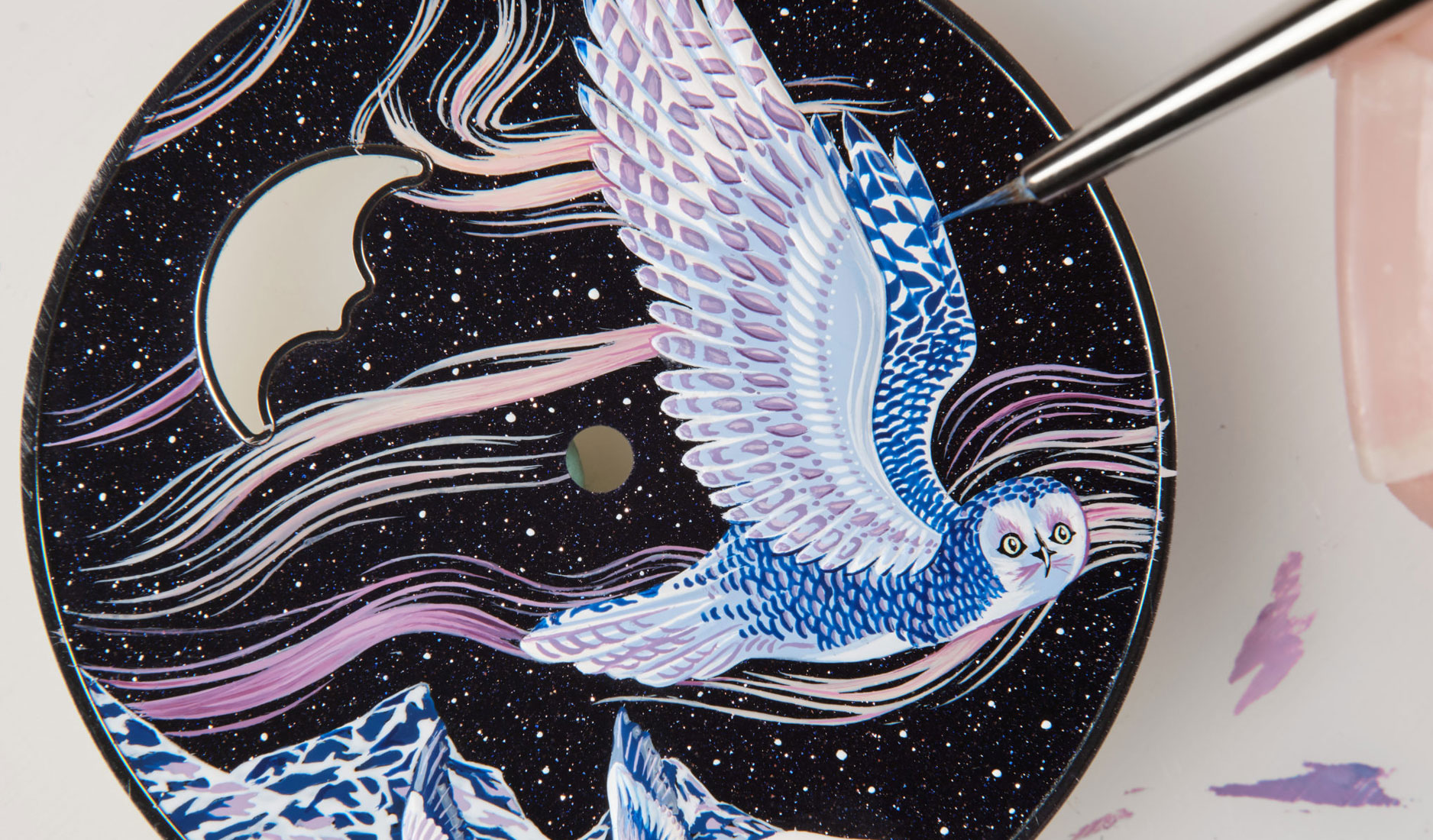 A quick glance is all it takes to realise these dials are as intricate as they come. For one, each is meticulously hand-painted, with an amazing amount of attention to detail. Bearing in mind these dials are fitted in a 38mm case and you’ll appreciate how each feather on the owl, each ridge on the mountain, is painted with extreme precision. It’s both labour-intensive and a labour of love. 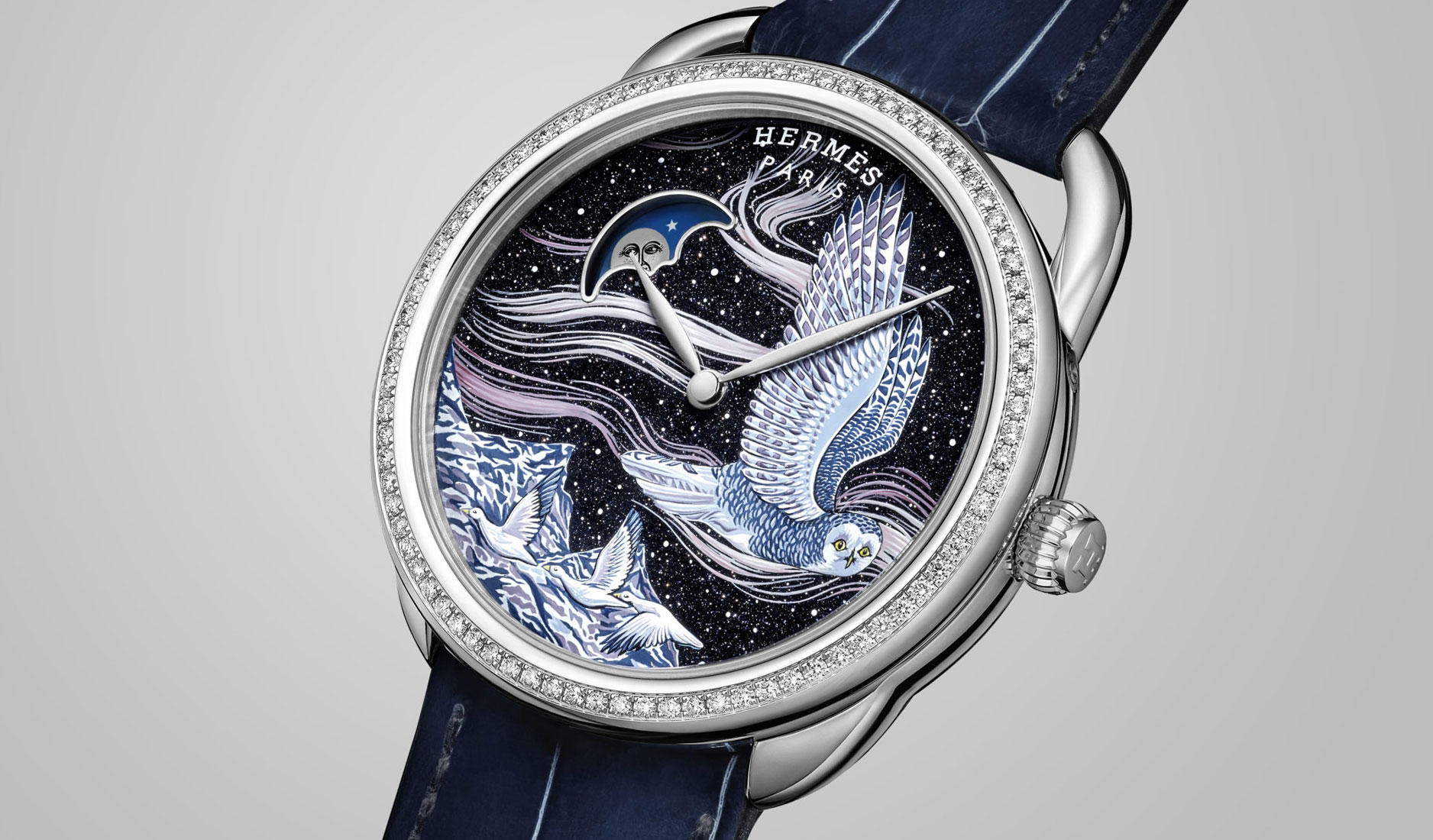 Each dial takes the Hermès artisan over a week to complete, with the contours first traced out on the aventurine, then placing the dial in the kiln to bake. A three-dimensional effect is achieved through successive layers of paint and baking in the kiln, resulting in the subtle tones, gradients and volume in each painting.

Under the dial, you’ll find the in-house self-winding Calibre H1912 movement behind the polar bear model and the Calibre H1837, incorporating a moonphase complication, in the snowy owl model. Both versions have a power reserve of 50 hours, and are housed in a white gold case with 82 diamonds. 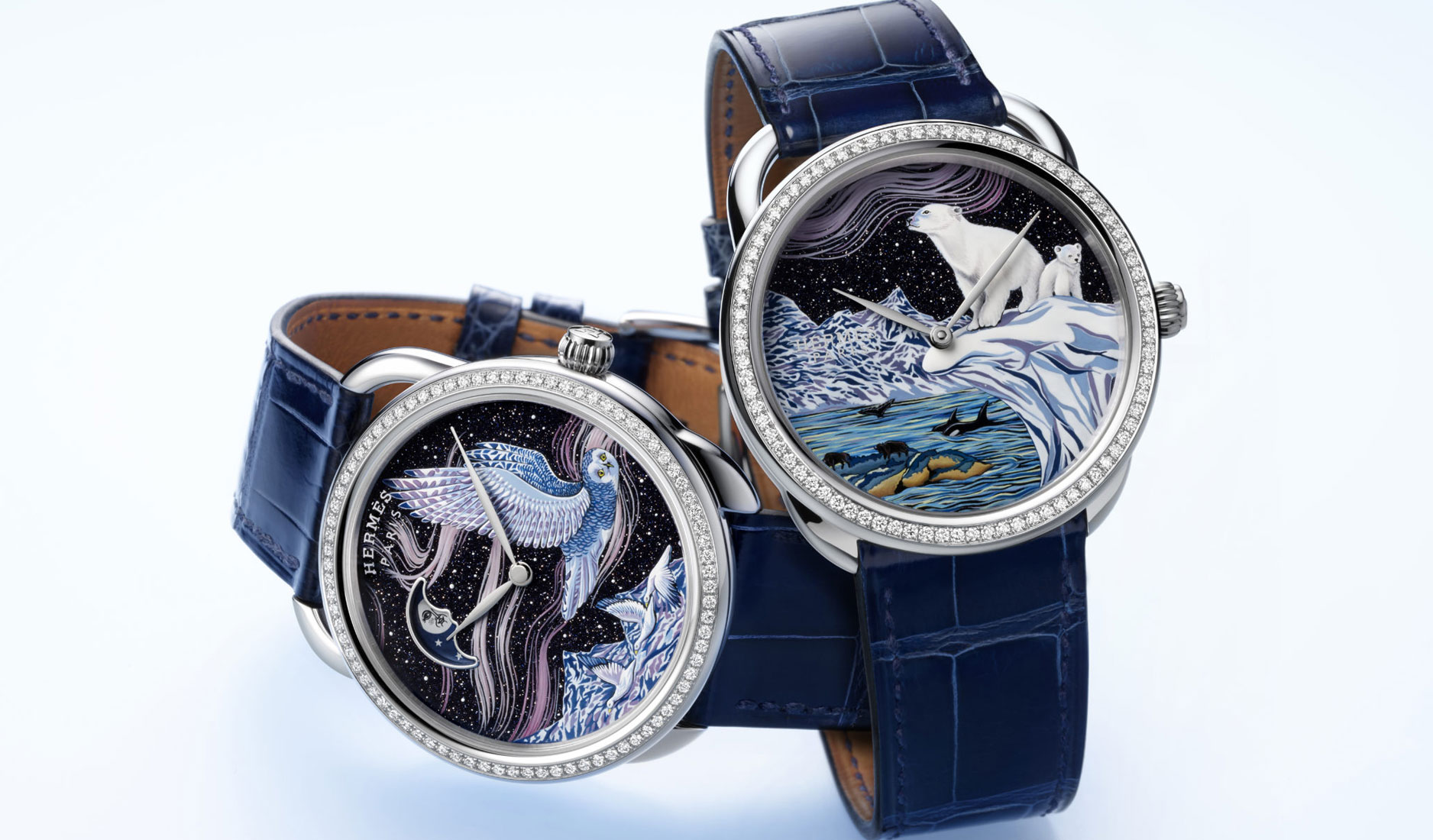 Paired with a sapphire blue alligator strap crafted by the Hermès Horloger artisans, the two models are limited to 24 numbered editions each. Sure, it’s not the same as actually being in the Canadian wilderness, but with dials this gorgeous, we really wouldn’t mind just staying home and getting lost in the intricacies of these remarkable art pieces.