When Harry Winston first entered the world of horology in 1989 with the Premier collection – a men’s complication featuring a bi-retrograde perpetual calendar – the shadow of its jewellery prowess loomed large. Even CEO Nayla Hayek, too, admitted in a recent interview with Forbes that “When you think Harry Winston, you think jewellery first.”

Such pedigree in jewellery isn’t necessarily a bad thing as it gives Harry Winston its footing in decorative dials. While the brand has serious horological pieces right up there with the best of them – think the Histoire de Tourbillon, Opus and Project Z collections – its expertise in jewellery and decorative arts makes it eminently suited to producing beautiful, aesthetically superlative timepieces.

Increasingly, the brand has introduced more Métiers d’Arts pieces that range from stunning to downright astounding, even a little showy at times just because, well, they can. Here are six hard-to-master decorative techniques that Harry Winston currently offers in its repertoire, transforming gorgeous wristwatches into mini-masterpieces. 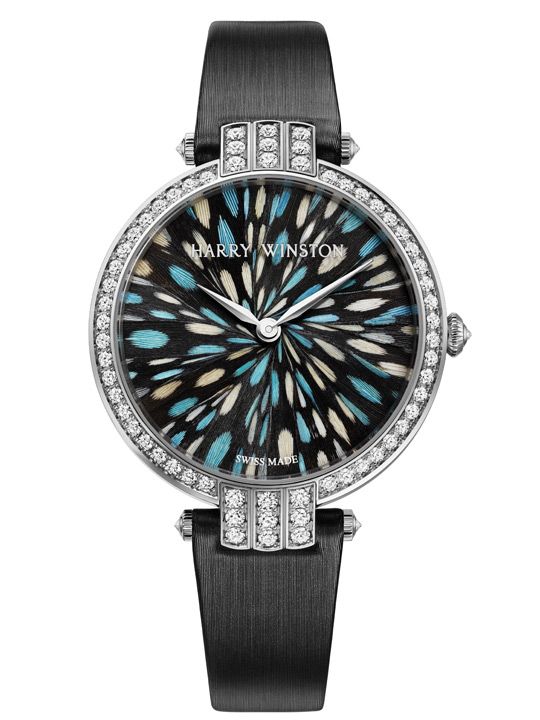 In 2013, Harry Winston tapped on the skills of Nelly Saunier, a gifted master feather artist, or plumassière, to embellish the dials of its Premier collection with feathers taken from pheasants and guinea fowls specially bred for this purpose. Due to the delicate nature of the raw materials, the plumassière’s dexterity is of utmost importance, along with a keen eye for proportions and colour. Each dial takes an average of eight hours to assemble and is composed in a nocturnal motif using a combination of purple and turquoise pheasant and peacock feathers, guinea fowl and silvered pheasant feathers tinted blue, or simply blue-tinted guinea fowl feathers. 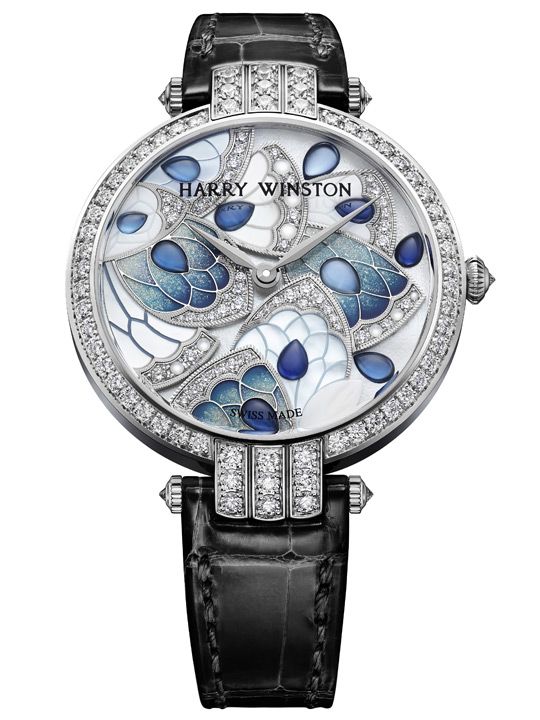 Using this ancient art form, which dates to the Egyptian empire and enjoyed great popularity in the 17th and 18th centuries, Harry Winston gave the dials of its Avenue C and Premier collection a scintillating array of mother-of-pearl including Freshwater, Tahitian, solid pink, white and beaded varieties.

On this Premier Precious Marquetry model, artisans took over 100 hours to piece the dial together, setting mother-of-pearl, enamel, diamonds and cabochon sapphires at varying levels to create a three-dimensional effect. White mother-of-pearl is meticulously hand-painted and shaped to resemble an ivory cabochon and, for additional colour, three paillonné enamel sections are sprinkled with gold dust and set with diamonds and cabochon sapphires. 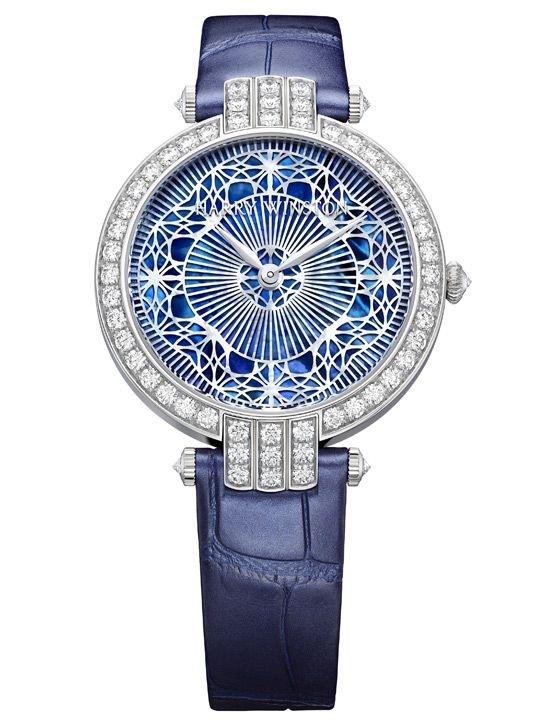 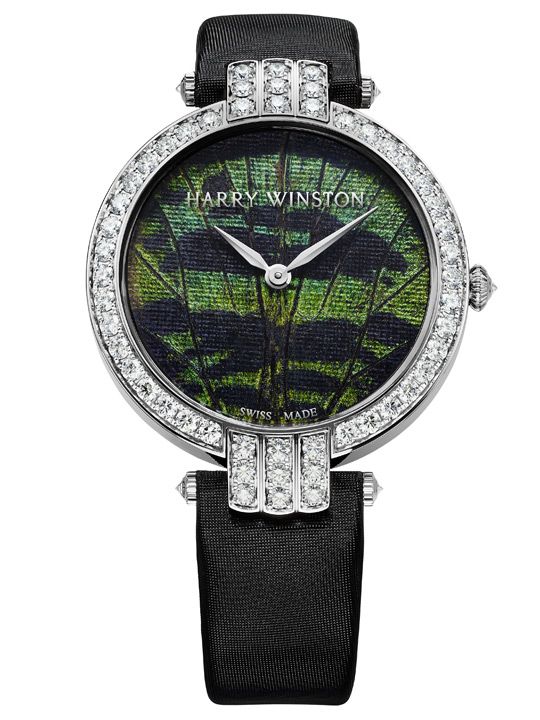 Harry Winston pushed the boundaries even further in 2015 when they decided to employ an unexpected material—butterfly wings, or more specifically, the iridescent powder found on these wings, chosen for their intense pigments that catch the light and project an array of colours.

Designers spent three years researching and developing a technique where they would harvest and apply the powder on each dial to recreate actual butterfly wings and present a fascinating kaleidoscope of colour. In fact, the iridescent powder is the only material used to create the pattern on the dial. While on a trip to Bombay in 1955, Harry Winston met jewellery designer Ambaji V. Shinde and the duo quickly developed a friendship, with Shinde becoming a designer of the House and creating pieces like a tiara and the famous ‘Star of the Desert’ necklace. In tribute to his designs, Harry Winston launched the Shinde timepieces in 2015, which featured replicas of Shinde’s jewellery creations using a special gold engraving technique.

For the tiara version (seen here), a thin 24K thread measuring four-tenths of a millimeter is used to create the intricate dial pattern. The dial itself is made of grand feu enamel. Three marquise-cut diamonds also feature in the design, adding jewellery-setting to an impressive list of the different decorative arts executed in just one timepiece. 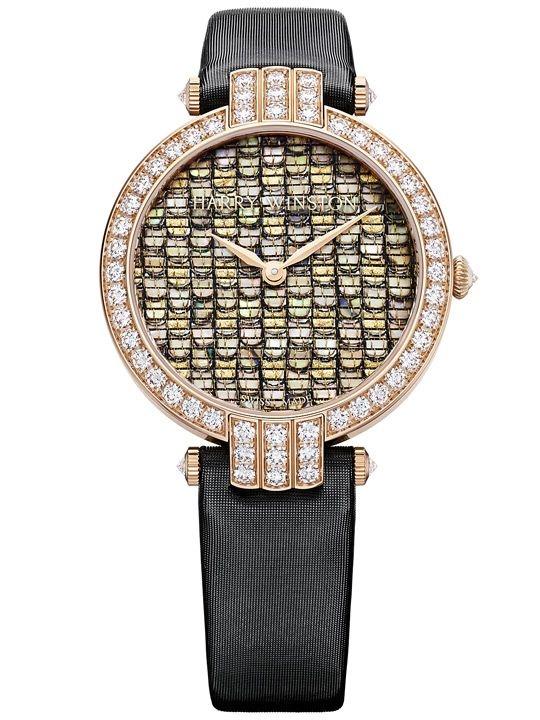 Turning to the Japanese for their latest collection of artistic dials, artisans at Harry Winston used a rare weaving technique based on the art of ‘raden’, an ancient craft where shells are applied on wood or lacquer. In their Premier Precious Weaving collection, silken threads of gold are woven with wafer-thin leaves of mother-of-pearl to create a dazzling backdrop that glimmers at different angles. The project took a year and a half to contemplate and research as it was the first time Harry Winston had ever used woven silk and mother-of-pearl in a timepiece.