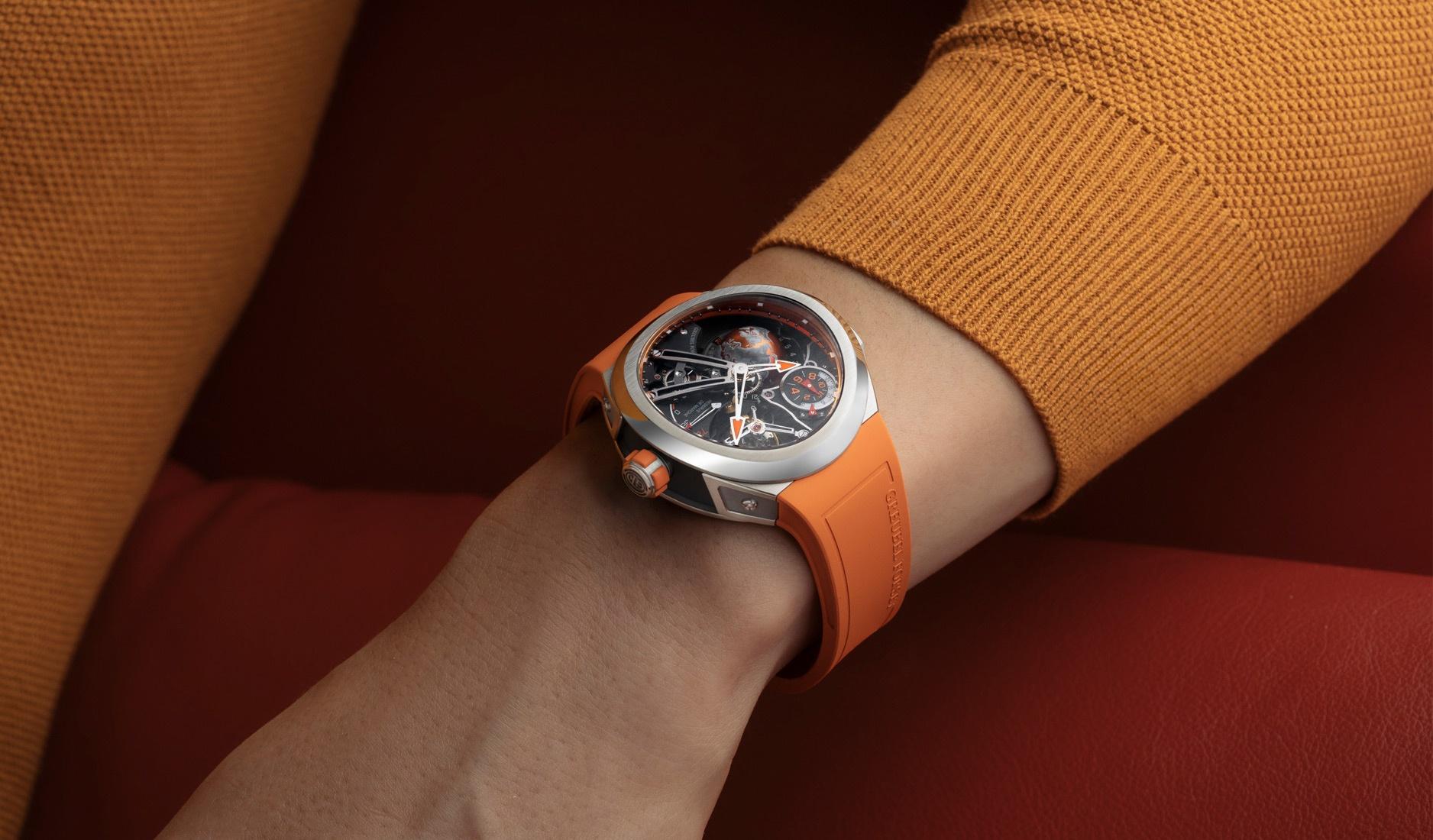 Evidently, not all sports-inspired world-time watches are created equal. There are too many brands (which we won’t name) that attempt to shoehorn multi-time zone complications in cookie-cutter ‘sports-inspired’ chassis, only to end up with watches that look like the horological equivalent of Frankenstein on a bad day. And then there is the Greubel Forsey and its GMT Sport, a watch that boldly declares its two biggest features in its name and manages to surpass both.

Admittedly, the GMT Sport’s debut in 2019 was neatly paved by its predecessor, the GMT, from 2011. An aesthetically elaborate technical tour de force, the GMT captivates and confounds one in equal measure.

Housed in a 43.5mm case with usual protrusions to accommodate its myriad displays, the GMT rocked up with – get this – an off-centred time display; a 12-hour sub-dial for the second-time zone; a terrestrial globe that makes a full rotation once every 24 hours to offer intuitive and true-to-life world time display; AND Greubel Forsey’s iconic Tourbillon 24 Secondes, a tourbillon in a cage that that is inclined at 25-degrees and makes a full rotation every 24 seconds for optimum timekeeping precision. The GMT was, in short, the planet’s most advanced and artistically progressive world time watch. 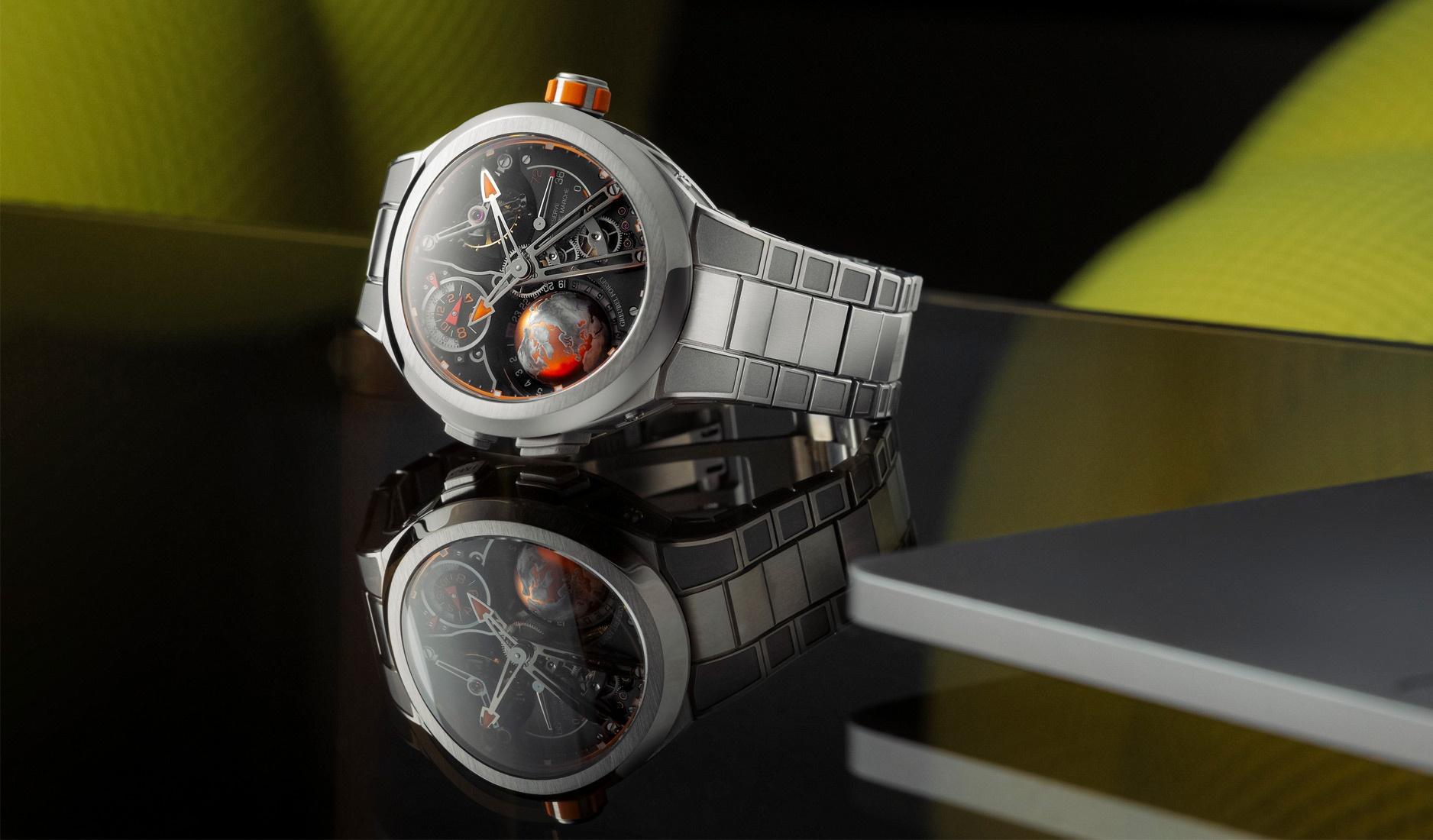 But back to the GMT Sport. Probably buoyed by the appreciation it received for the original GMT, Greubel Forsey decided to transpose the watch’s unique design and technical virtues into its very first sports model. Boasting the same mind-boggling characteristics and features as the GMT, the GMT Sport emerged as a super-charged and, to some, even more complex iteration of the former.

Just like the original GMT Sport, the new GMT Sport ‘Sincere Fine Watches Special Edition’ is distinguished by a stunning ovoid case. The fastidiously constructed case features an unusual elliptical profile with a gently curved and sloping bezel, and sapphire crystal that draws you in and demands close inspection to ascertain its shape. Also, as it is with other models in the GMT Sport series, the new iteration, while boasting the same functions as the first GMT watch, houses a 435-part movement with 72-hour power reserve that has been rebuilt from scratch to accommodate the unique case. 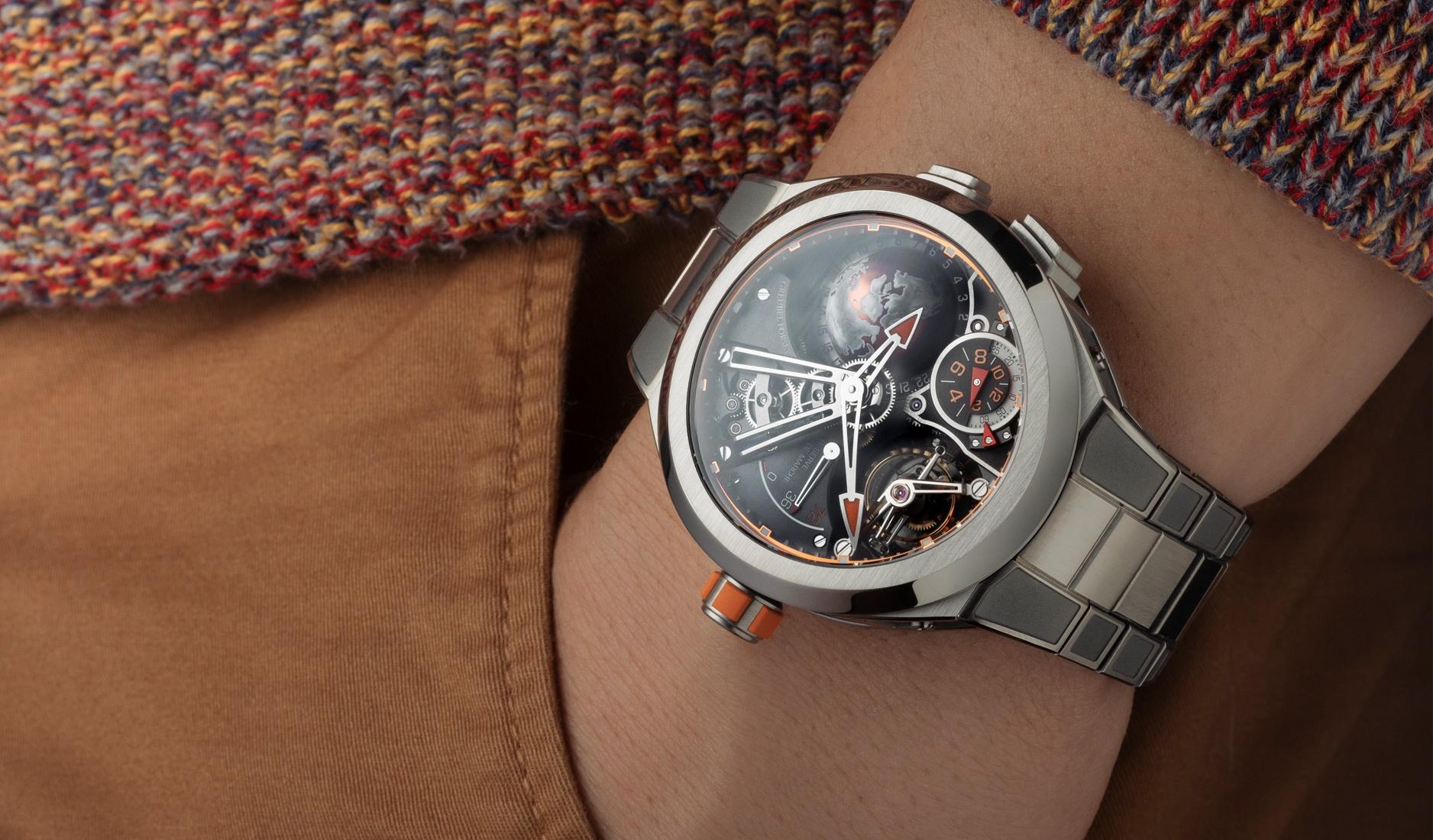 At 45mm in diameter and 15.7mm in height, and coupled with the three-dimensional dial and sculptural displays, the watch appears gargantuan on first impression. But its ergonomic lines and titanium case makes it incredibly light and, surprisingly, easy to wear. The watch is complemented with an integrated three-link titanium bracelet – Greubel Forsey’s first metal bracelet – that was introduced earlier this year. Alternatively, one may opt for it to be paired with a textured rubber strap. 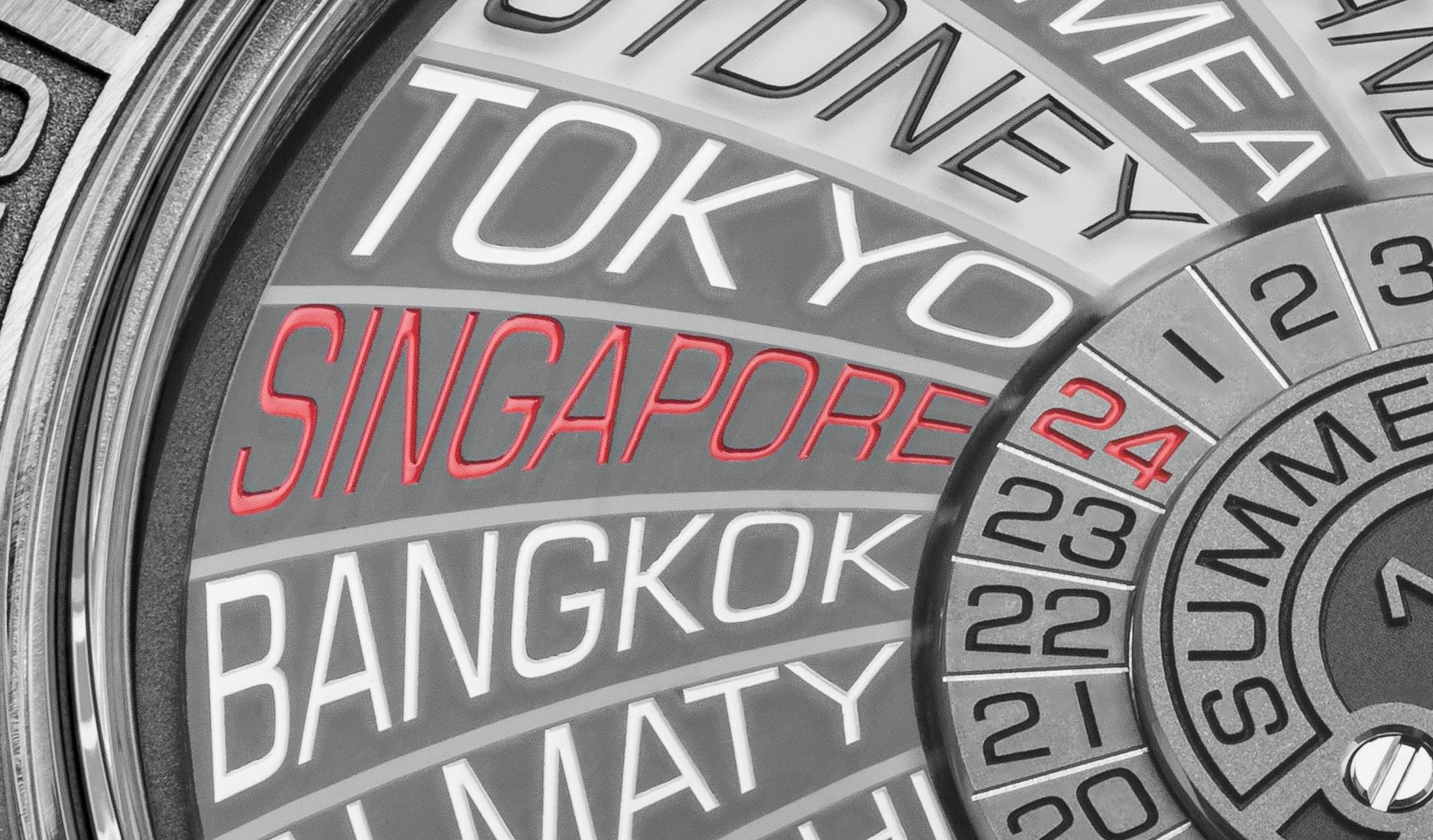 Limited to five pieces, the GMT Sport ‘Sincere Fine Watches Special Edition’ is, as its name suggests, created to commemorate the long-standing partnership between Greubel Forsey and the esteemed Singapore-born luxury watch retailer. The exclusive collectible sets itself apart from other references with its bright orange accents on the crown, tip of the hands, terrestrial globe, second-time zone hour numerals and the textured rubber strap. On the back of the case, which features a 24-city disc that displays the Universal (UTC) and Summer time across 24 major time zones, a special inscription bearing the name ‘Singapore’ in red appears in one of the city slots. Horologically adventurous aficionados from the city-state and long-term VVIP customers of the renowned retailer will certainly not want to miss out. 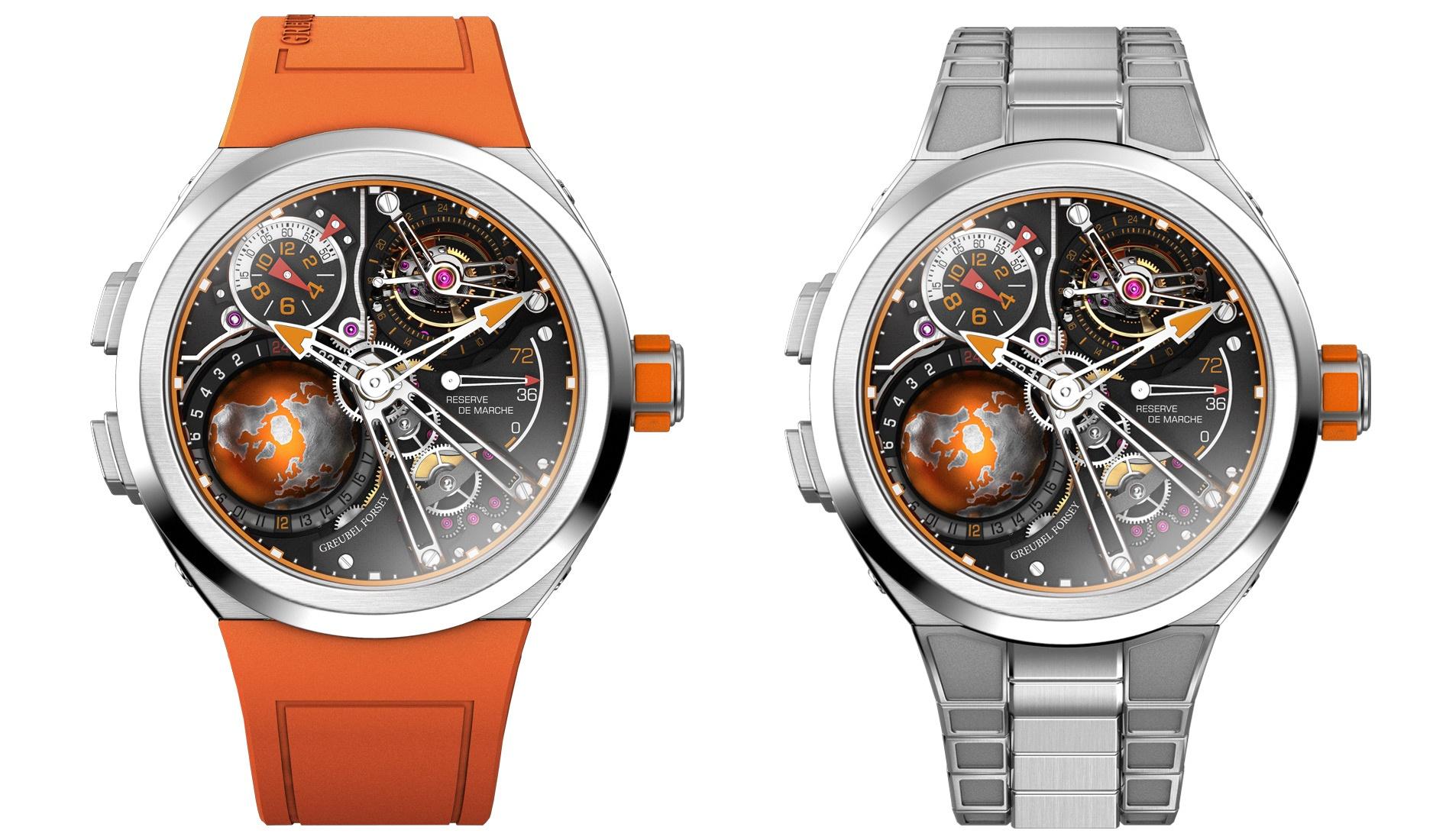 “(The watch affirms) the excellent relationship between Greubel Forsey and Sincere Fine Watches. We want to offer an exclusive GMT Sport to this region, as this is an astonishing product that embodies modernity and aesthetics,” says Antonio Calce, CEO of Greubel Forsey.