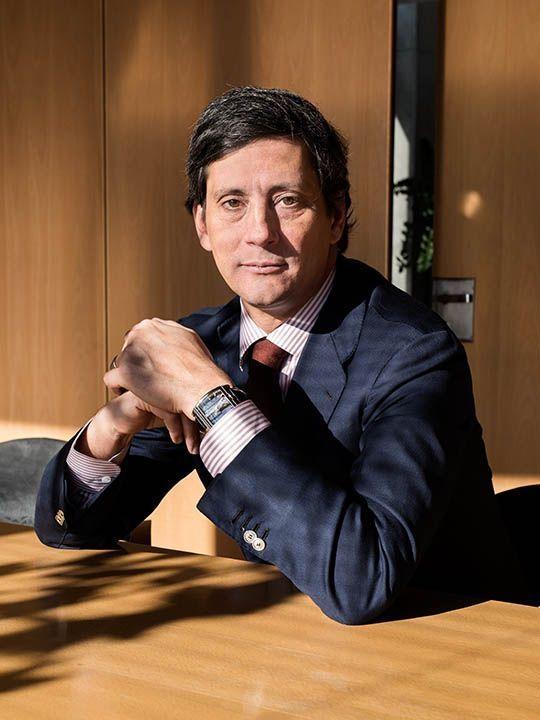 Ten months into his role as Corum’s chief operating officer, Davide Traxler has already travelled twice around the world to get insights into the development of the brand and find out what global customers are after. In fact, the day of this interview, he had just flown in from Hong Kong and was due on the first flight out to Bangkok the next day.

The frequent flyer confesses he travels about 150 days a year and spends whatever downtime he has with his family. “I’m terribly boring, I don’t jump off airplanes, I don’t do anything special. I just spend time with my family and read books. I’m the most boring creature in the whole world,” he smiles.

Born in New York to an English mother and Italian father, Traxler was schooled in France and has lived all over the world (“I’m a mess,” he quips). His children currently reside in Paris, Milan and London while he is based in La Chaux-de-Fonds. This mix of cultures has worked to his advantage as the new leader of the watch brand.

“When I came in, my main role was to understand the cultural difference between a Hong Kong-based company (Corum owner Citychamp Watch & Jewellery) with its own traditions and culture, and a La Chaux-de-Fonds company also with its own traditions and culture,” he reveals. “There was a bit of culture shock so I’m kind of the buffer between the two.” He adds, “I think when you come from a very varied background—I lived in Africa, South America and Europe—you’re used to interacting with different cultures, so I actually enjoy it.”

With the leadership changes from Severin Wunderman to Citychamp currently, has Corum had to rebuild itself?
I would say that the main change we’ve had is a change of the whole trade. My impression is that for a long time, there has been a very positive flow for the whole industry and the CEOs and leaders kind of lost contact with the market. I think a lot of egos were built and it created a kind of distance between the markets and the CEOs. I think that time is over and it’s a time for listening, for learning, for looking, and for really being on top of the market because I think there was too much distance, honestly.

Has the golden era of the watch industry passed and do you think it will peak again?
I wouldn’t say there’s another peak to come but I would say when you have a trade that goes well for 30 years, you have to expect that it matures at a certain point and it’s maturing so it’s becoming a better trade. I think when things become more normal, it’s a better trade.

Audemars Piguet has its Royal Oak and Millenary, Jaeger-LeCoultre has its Reverso. What would you consider to be the key pillars of Corum?
Of course the Golden Bridge—it’s unique, it’s special, and we’re the only ones to make anything like it. But Corum has this history of special pieces it’s made through the years and when you go through the archives, it’s just incredible. You’ll see pieces like the Coin Watch (below) worn by presidents, by Andy Warhol, by the Bee Gees, you know, by special people who choose to wear special watches. The other day I saw the King of Spain who was wearing an Admiral’s Cup and you see so many people who can afford what they want and choose what they want and they choose Corum. And they chose us through the years so that makes us very special.

You have watches that cost under $3,000 but also high jewellery skeleton pieces with tourbillons. What exactly is the positioning of Corum?
Well I think to a certain extent, that’s the challenge. We basically have three brands within a brand. We have the Admiral’s Cup, Bubble and Golden Bridge. And when you have these three, you have to be able to communicate them and they’re not totally coherent between one another.

At the same time, it gives us resilience in the market because, for example, the Admiral’s Cup performs better in Europe and the Golden Bridge is stronger in Asia. So we have different strengths in different markets. That means that we’re less dependent on one design or one market and that does help us. Honestly for a small company today, we see some of our competitors who were hit by the Russian crisis, other markets slowing down, but we are balancing out pretty well and I think we’re the only brand this year that can say that after six months, we’re growing 104%. So we’re the fastest growing brand in the market.

Which is your best performing line?
The relaunch of the Bubble (below) was very special. It brought quantity and volume. On the other hand, the round Golden Bridge remains our bestseller in terms of value. 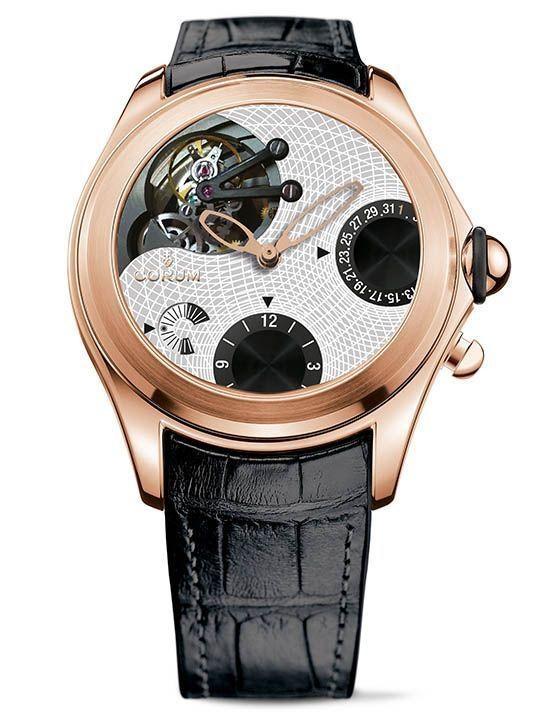 What is the target audience of the Bubble and how does it fit into the narrative of the whole Corum story?
The Bubble has been an iconic piece from Corum since its launch in 2000 and there are many Bubble collectors. It’s kind of a different world. It is a crazy watch that appeals to people who want real watchmaking but at the same time want something different, with a twist. How does it fit in? They are special watches for special people. It’s all about telling a story that’s different—a crazy, amusing funny story.

The Bubble client is an affluent client who is looking for a twist. So what we see is people going into the store looking for a high-end watch and instead they end up buying five, six, seven Bubbles. And we see a lot of these repeat purchases. People buy many pieces together and is it for gifts? Is it because they want to wear it and also give it as a gift? Is it because they want the whole collection? I don’t have that information but what I do know is that we have a lot of people buying multiples.

You’re collaborating with Steve Aoki. Isn’t that a very specific demographic you’re targeting?
I would say that actually we’re not targeting a demographic. That demographic is probably younger than our clients. But what we are doing is we’re matching up with someone who’s got a great creative leadership and who loves the Bubble. I met with Steve in Ibiza and we had a meeting on a boat. That’s so different from what we have all the time in our watchmaking world. It allows us to open up and understand a different world. And he is creative, he’s got an energy that’s incredible. He’s someone who can do three concerts in one day in three different cities. It’s absolutely flabbergasting and so it’s a great pleasure to work with someone like him.

And how many Bubbles does Steve own?
He has I think, six or seven? And he’s designing his own of course. We’re working on basically three sizes but we haven’t disclosed anything yet so we’re waiting to see.

All your different collections are quite distinct but what’s the Heritage collection about?
The Heritage is all those incredible pieces that were made through the years. When you go through the archives, you see all the people who have worn them—incredible generals, musicians, artists. They’ve always been chosen by incredibly distinctive people. The Coin watch, for example—five American presidents wore it and apparently, Mr. Trump will wear it at the convention.

How do you feel about that?
Well I’m happy because he’s someone who can afford any watch and who chooses our watch. How special is that? I don’t have a political view, I’m totally Swiss like that—we’re neutral. But the point is, here we have someone who can afford anything and he chooses to wear a watch that he considers a president’s watch so that’s very touching for us.

How do your 2016 collections come together to tell a cohesive story?
They came together simply by listening. I went around the world twice immediately when I joined the company and there were very clear messages that came out, and those were what we followed. 85% of our offerings are shaped watches and 95% of the market is round watches. So we needed a round watch and came up with the round Golden Bridge (below). 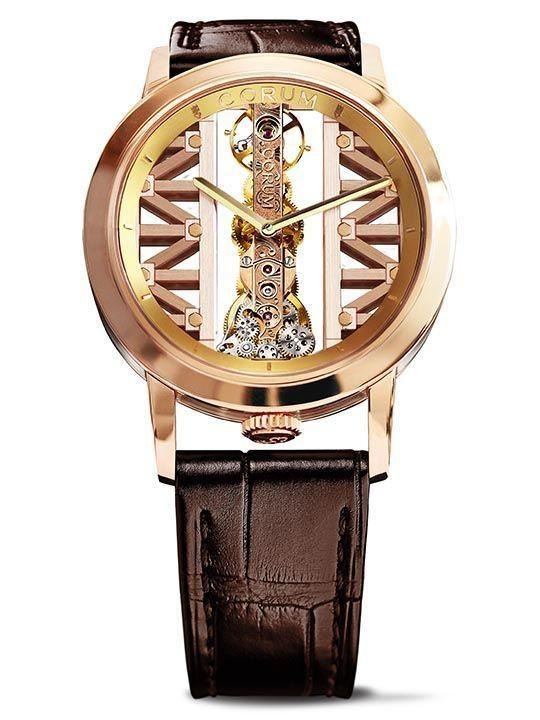 And when it came to flags on the Admiral’s Cup (below), everyone wanted to see the flags very strongly and so we reinforced them with a design contest among young designers. And Bubble was all about being crazy because around the world, what I heard was people wanted Bubbles. They kept on talking about this watch. And so it was time to bring it back strongly. 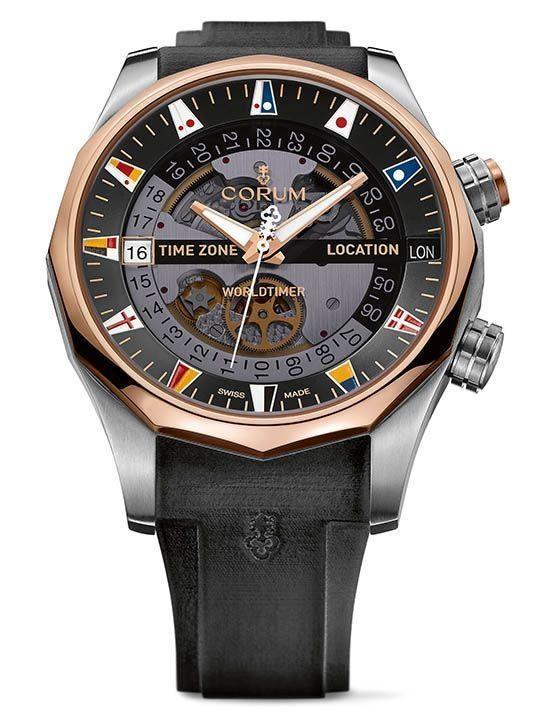 What watch trends are you predicting in the next few years?
It’s always difficult to predict but what I do see is that watch sizes worldwide have come much closer than a few years ago in the sense that we have requests from Asia for 47mm and we even had a crazy request for a 52mm Bubble from Malaysia, not from South America or Russia. So we’re going to launch a Bubble 52 because the market asked for it. 52mm case is huge; it’s surprising, I was taken aback but that’s what the market is saying. So all the preconceptions of small watches here in Asia is disappearing in the big mix. You see sizes becoming more uniform around the world.

Another thing I do see is there is a huge space for ladies’ watches. I feel that major ladies’ brands have not invested sufficient creativity and interest in movements for ladies’ timepieces and I think that you’re seeing a general focus of the whole trade to rediscover what ladies’ watches are all about. It’s not just all about jewels.

What are your long term goals for the brand?
I want the brand to be among those five brands that are considered absolutely special that a collector wants to have. That’s not a question of size. It’s a question of distinction. And I think Golden Bridge has to be one of those watches that anyone who collects watches wants to have. And I think Bubble has its place there too. It’s much more about the character of the brand than the size of the brand.

More in this category: First In Singapore: Corum’s 2016 Bubble Collection Elisabetta Fantone: Inside The Bubble
back to top