“I’m someone who will not give up on himself”. 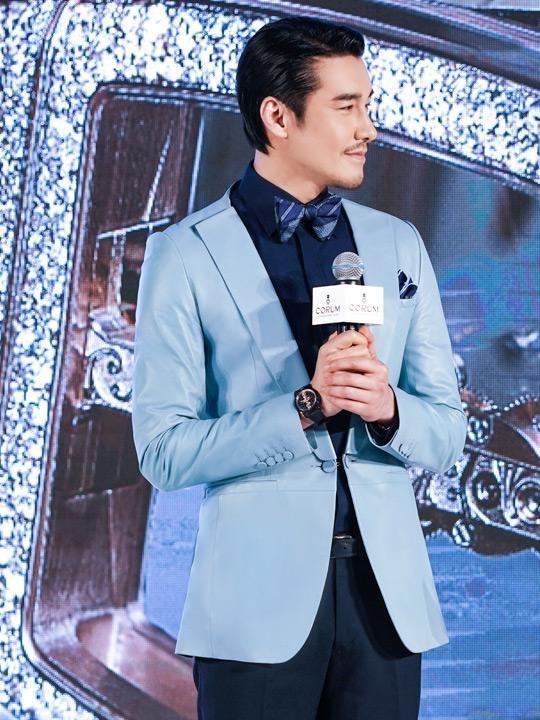 The first thing you really notice about Hu Bing is how tall he is. At 1.89m, it’s clear the 48-year-old Chinese model and actor towers over everyone else in the room. But while you’d think a star of his stature (in all senses of the word) would be aloof and intimidating, he’s anything but.

Friendly, polite and ever the consummate professional, the former Olympic rower (a back injury cut short his sporting career at 19) pauses thoughtfully before each question and takes the time to detail his responses. He seems so game to answer anything we’re almost tempted to ask about his skincare regime but, like consummate professionals ourselves, we stick to the prepared questions. Here’s what he has to say about time and timepieces:

What’s on your wrist today?
I’m wearing the Corum Golden Bridge Titane DLC Tourbillon (below). I love the Golden Bridge collection because I’m usually in formal wear and this watch complements my outfits very well. When I was younger, I used to like showing off and wearing watches with lots of diamonds. I didn’t care about the movement, only whether the watch looked good. Now that I’m older, I feel a watch actually showcases my personality. I don’t want people to just think I’m wearing something expensive and neglect to see how it is an extension of my personality. 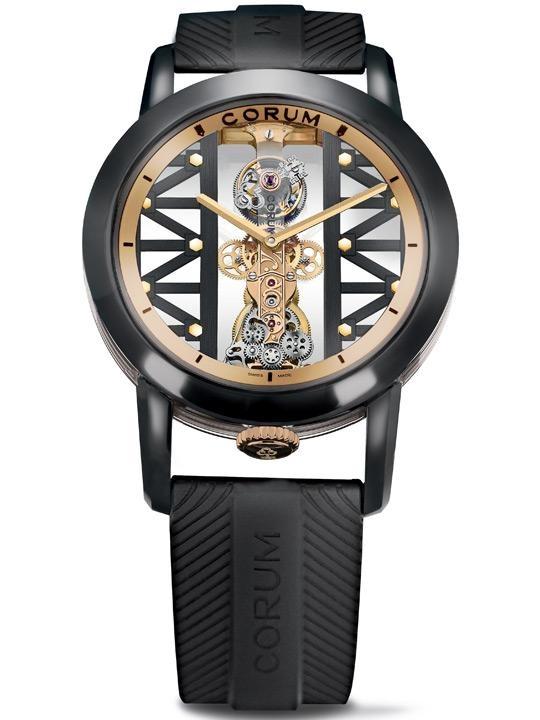 I love that Corum has used titanium DLC on this watch, showing that luxury watches need not just come in gold or platinum with diamonds. Actually, the most expensive part of this watch is probably the intricate movement. Just because it’s in titanium DLC doesn’t mean it’s a cheap watch. It’s actually a really high-tech material to use and I like that Corum is always embracing fresh ideas.

Tell us about the first mechanical watch you owned.
I come from a military family and, in our home, you’re officially an adult when you turn 20. That means you have to take care of the family because now you’ve become a man. It’s our family tradition that at this occasion, my father would hand me a watch that was also passed down to him. Back then, I was an athlete, so time was very precious to me. The difference of one second could mean a gold medal.

When I received the steel watch from my father, it felt especially heavy, not because of its physical weight—I was a strong athlete—but it felt heavy because it represented responsibility. It signified that I was no longer a child and I couldn’t ask my father for money anymore. I had to be the one to take care of the family. So I feel watches, for men especially, have an incredible significance in my heart for this reason. If I have a child in future, I would want to pass that watch on as well, because even though it’s not expensive, it’s very meaningful to me. My father likes to ask, from time to time, “You haven’t thrown that watch away, have you?” I haven’t by the way! (Laughs)

If you could design a watch, what would be its most important feature?
I actually entered the watch industry pretty early because I was working with many international watch brands about 20 years ago. I've even been to the Geneva watch fair many times. Because of this experience, you could say I know more about watches than the average person. So if I were to design a watch, the emphasis really would be on the movement. I would tell the designer my preferred shape of the movement. I would also like the watch strap to be interchangeable. With the watch I'm wearing today, for example, I went with rubber instead of an alligator strap because I wanted to experience the fusion of its technology, future and specialty. To tell if a watch is really good, you can't just look at whether it has diamonds or gold. You have to look at it in its entirety; look at the craftsmanship.

Do you think watches are still relevant in the digital age?
With today's trends, digital technology is growing and people may not value mechanical watches as much. But if you think about it, there are so many people in the world, but only one watch on your wrist. You are the only one who owns that particular watch. So to the person who owns the watch, it's enough that he himself likes it. If you like smartwatches, go ahead. If you like mechanical watches, you should enjoy it too. To each his own.

I think watches are very important accessories for men. If I saw someone wearing an outfit without a watch, I'd assume he's not very stable. When I look at a man, I tend to look at his watch because I feel it represents his personality. If I see someone wearing something fancy, I'd question if the environment he's in requires that. If he's still wearing that fancy watch the next time I see him, then I'd think he's someone who's a bit of a show-off, and if I had to work with him, I'd be a bit more careful. 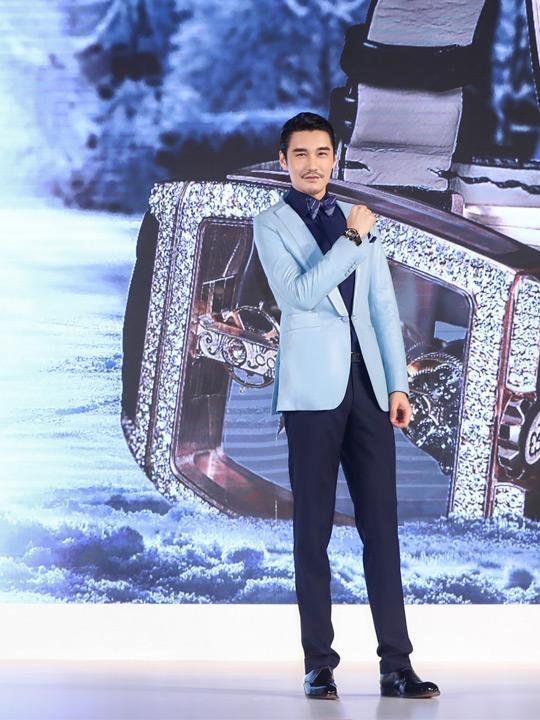 Corum's slogan is 'Craft Your Dreams'. How does that resonate with you?
You can tell by looking at me that I'm someone who will not give up on himself. I won't accept defeat and everything I do has to be done to the best of my abilities. So this, I feel, is very much in line with Corum’s ideals. The brand itself isn't like others, who might compromise for the sake of commercialism. It is very insistent on doing the things that it likes, and does it to the best of its abilities. That's where we are similar.

Corum also has a relatively low profile and I like that. I'm already 48 and have been in the modelling and entertainment business for almost 30 years. In 2020, it will be my 30th anniversary in the business, and I will be 50. I hope to release a biography then, to share how a Chinese man managed to persevere and grow in his career—and that's to not be greedy and do things well. It's very simple: do even the smallest things well. When you accomplish many little tasks, you'll look back and see that you've actually done a lot. That's how we are similar.

If you could be 16 again, what would you change?
I would wish that I wasn't so tall! It was hard for me because I would bang my head all the time when I stood up in planes. I'd knock my head so many times a day, even if I wasn't stupid to begin with, I'd have knocked myself stupid!
But seriously, I would have told myself to stop trying to behave like an adult, as all 16-year-olds do. I should have enjoyed being a teenager and not try to demonstrate to everyone that I was a grownup. I don't have any memories of being 16 because at that age, I was trying to become a world champion athlete, so I never did the things 16-year-olds do. If I had a chance to return to that age, I would wish to experience the joys of being a 16-year-old—be a little naughty, dream big dreams for myself. 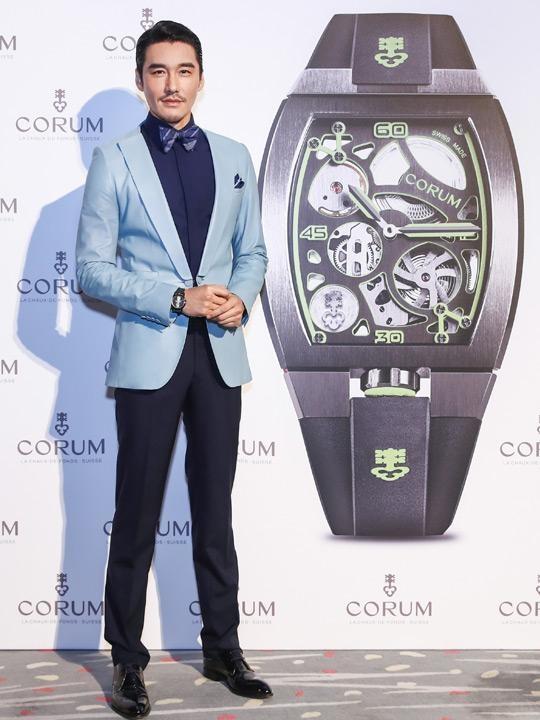 What’s next in your career plan?
Perhaps in the past I had too many careers. I never had a sense of security because I told myself I could never fail. I always had to succeed and do many things. Until one day, someone told me, "Hey, you're 48" and I realised I could no longer just be distracted or greedy.

So now I'm putting all my energy into my work in fashion and acting. I won't be doing anything else like investments because I don't have the energy. I hope instead to be a motivator, to encourage and help young designers by walking the runway for them. I take my team along and I don't charge them anything. I help with promotion—from London to Milan—and use my fame in the industry to help. I think that is one of the most charitable things I could do for the industry—to help young, up-and-coming designers. We need each other. They have changed the way I think. So probably in future, this is where I will channel my time and efforts to.