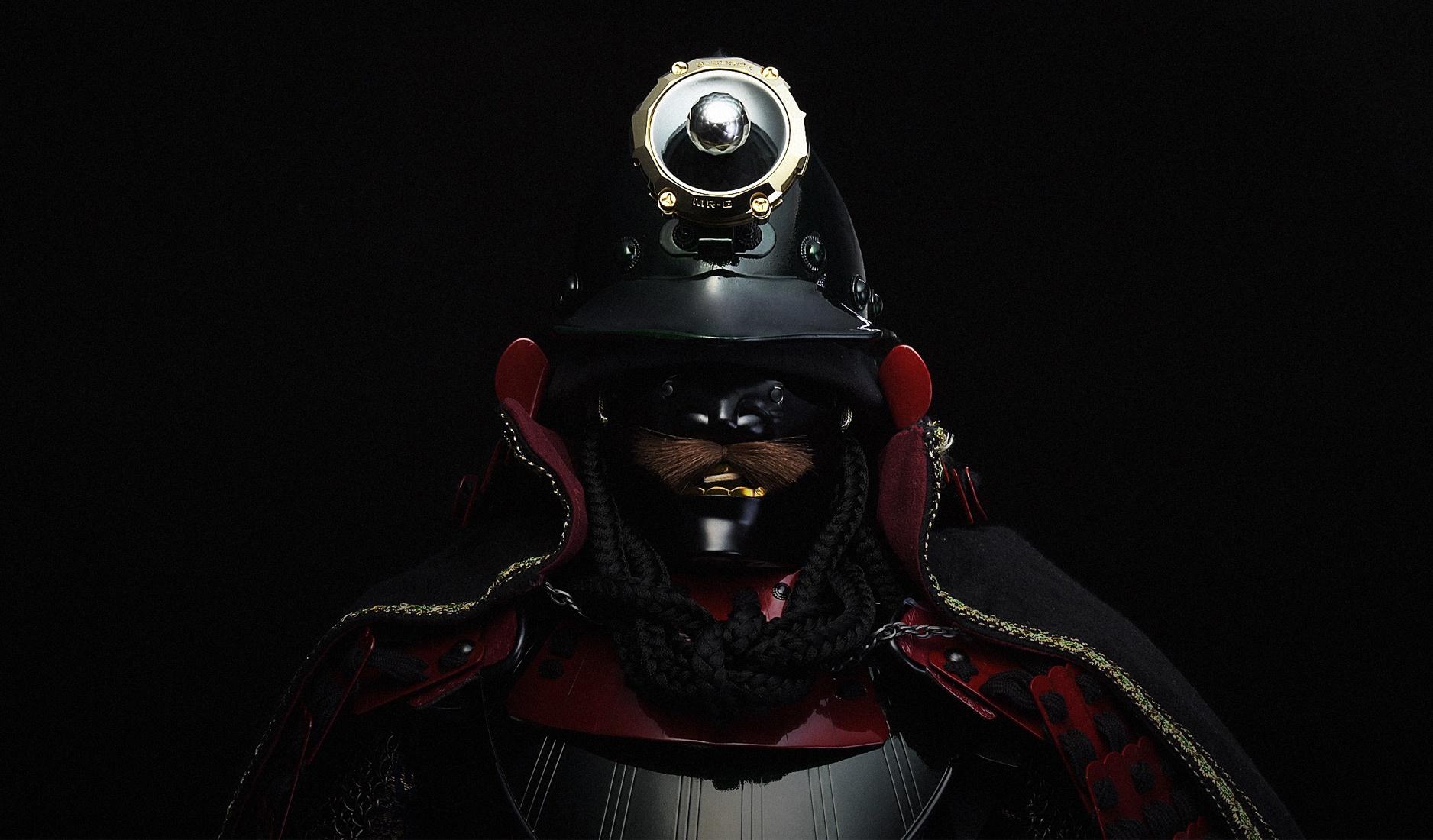 By now, any Casio G-Shock fan worth his salt would’ve been familiar with the iconic ultra-tough timepiece’s forays into the luxury echelons of watchmaking. Sure, most G-Shocks are still democratically priced accoutrements and a favourite amongst a wide spectrum of watch buyers, from young hypebeasts to hip hop stars. But for those who can afford it, Casio has been dropping baller-level G-Shocks across the watch’s various lines, from the GMW-B500 line of metal G-Shocks, to some truly eye-catching one-offs like the G-Shock G-D5000-9 ‘Dream Project’ in yellow gold that’s priced at S$100,000.

And then there’s the MR-G series, a line that was introduced in 1996 that is pitched as a ‘premium G-Shock’ for grown-ups. The MR-G watches tout the G-Shock collection’s signature indestructibility and robustness, but with high quality materials and artisanal finishing (the letters ‘MR’ stands for ‘majesty’ and ‘reality’). Recent notable examples include the MRG-G1000HT (2016), hand-decorated with the ‘Ttsuiki’ technique, a 1,200-year old armoury-inspired technique of hammering intricate designs into metal sheets; as well as the MRG-G2000GA (2018), which features the ‘yasuri-me’ decoration found on traditional Japanese swords, applied by a master craftsman trained in the 800-year-old 'Gassan' tradition of Japanese swordsmiths. 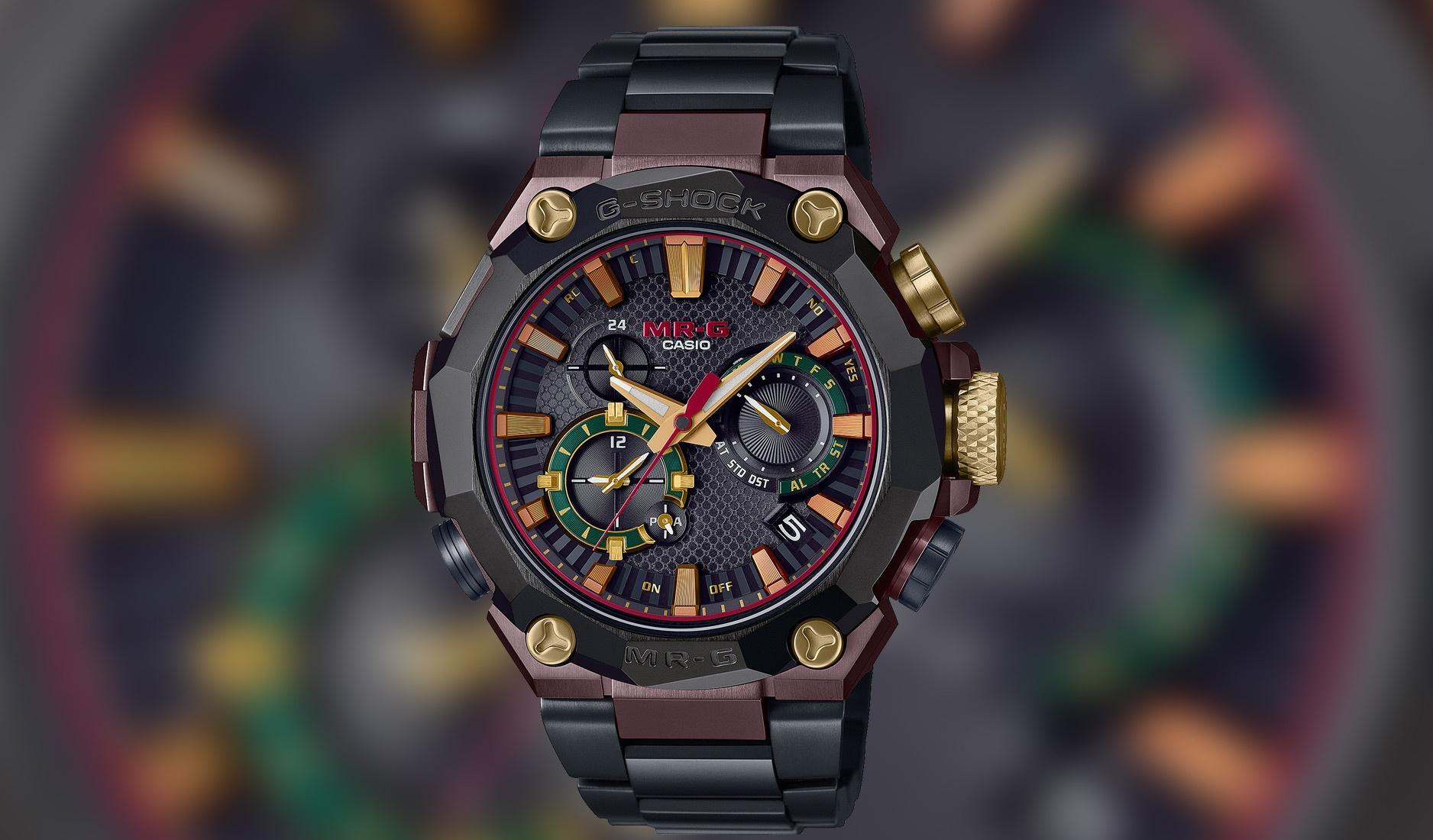 This year, the MR-G celebrates its 25th anniversary in style with the MRG-B2000BS-3ADR ‘Hana-Basara’, a 400-piece limited edition imbued with samurai swag. Yup, you read it right. The watch channels the spirit and style of the ancient Japanese warriors with artful finishing that evokes the beauty and hues of a samurai’s armour. The word ‘Hana-Basara’ is derived from the Sanskrit word for diamond, and the watch's thematic design takes inspiration from a class of samurai commanders known as Basara, who were known to don ornate and creative armour when going to battle. 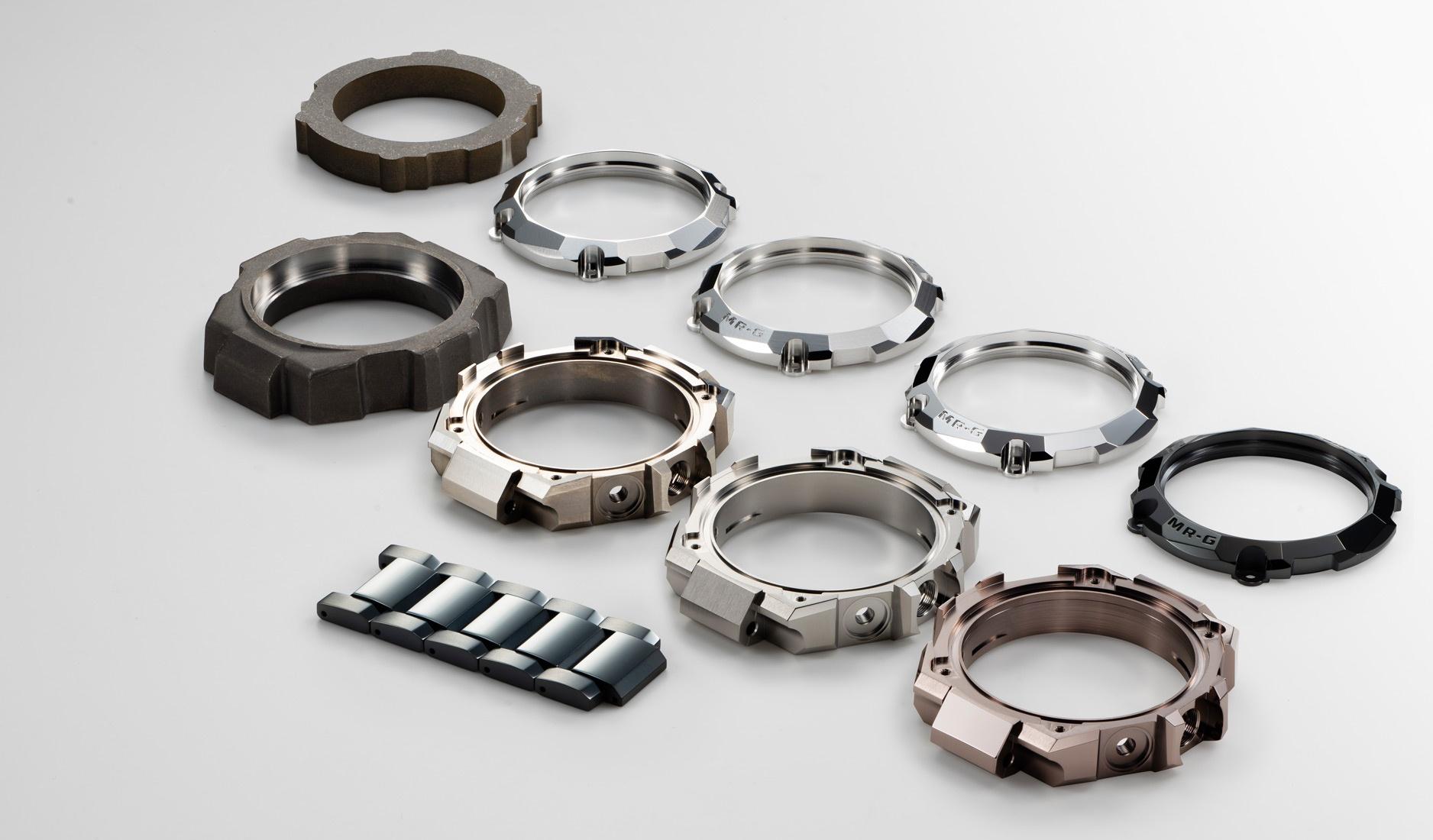 The MR-G ‘Hana-Basara’ amalgamates beauty and brawn with panache. The case and band are forged in DAT55G titanium alloy, which is three times harder than pure titanium, and sheathed in traditional ‘Kurogane-iro’ (literally iron-color) DLC coating. Elsewhere, the bezel is made of cobarion, a cobalt-chrome alloy that is four times harder than pure titanium. The ultra-tough bezel rocks a unique facetted design, which is hand-finished by Kazuhito Komatsu, a famed cutting and polishing artisan who is known for his work on Hana Shinjyu (faceted pearls). 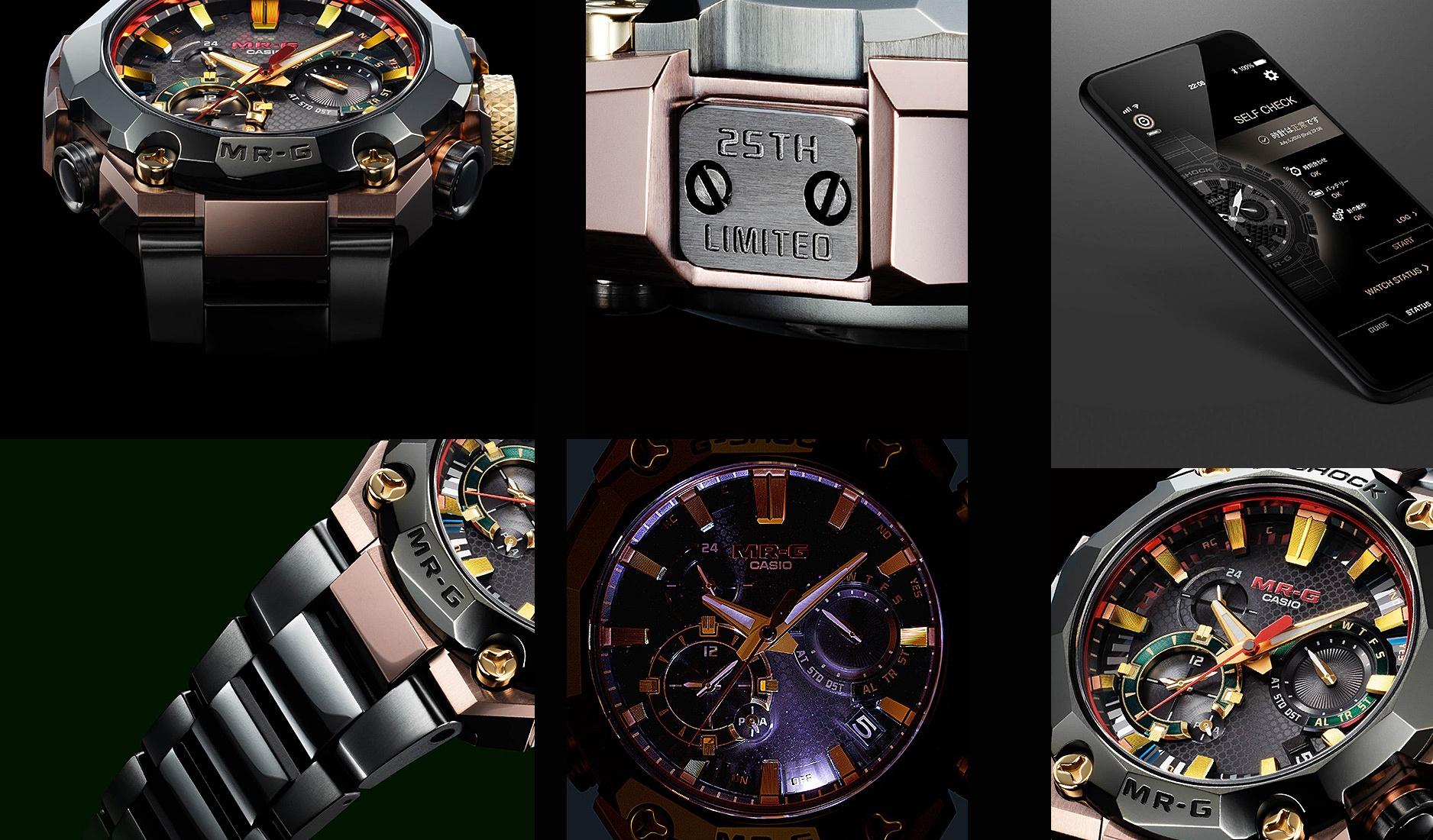 A vision of gold and iron, spiked with red, black and green accents components, the MR-G ‘Hana-Basara’ is an imposing timepiece. Measuring 54.7mm by 49.8mm by 16.9 mm, it is a watch that will not go unnoticed. And as with all G-Shocks, the MR-G ‘Hana-Basara’ is, first and foremost, an extreme toughie built with high functionality in mind. Besides touting the collection’s famed robustness, the watch is also water-resistant to 200m and comes loaded with useful features such as Casio’s Tough Solar power, radio-controlled time synchronisation, dual-time zone, 24-hour chronograph, 24-hour countdown timer, alarm, and an LED screen. 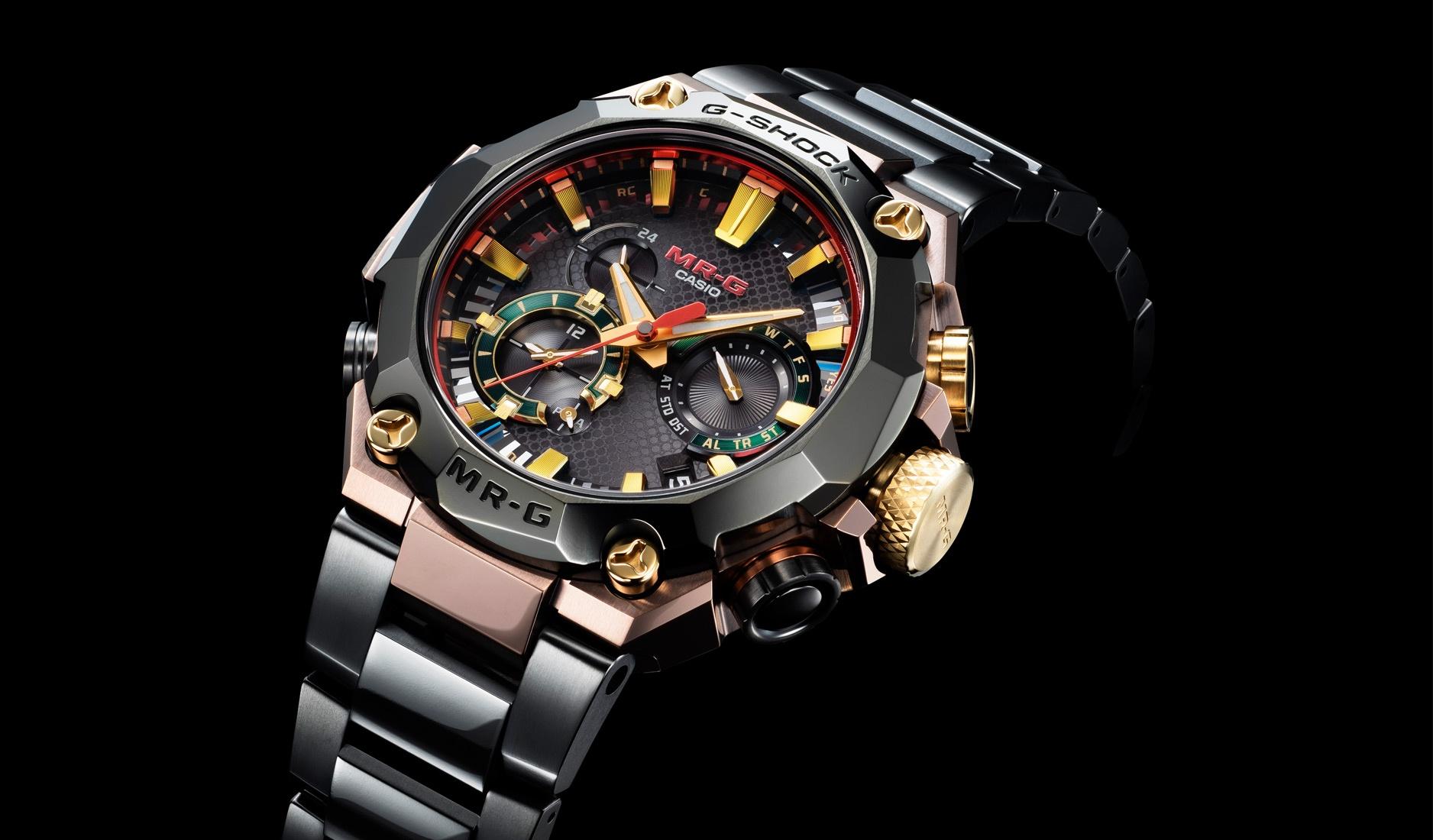 Priced at S$10,588, the MR-G ‘Hana-Basara’ is available in Singapore at G-SHOCK MBS Premium and ION store.