The much-loved ‘CasiOak’ gets dressed in shiny metal.

Transforming ultra-tough watches into gleaming objects of desire has long been in Casio’s playbook. The idea to sheathe a super-hardy daily beater in shiny metal was mooted back in the 1990s with the G-Shock MRG-100, a watch housed in stainless steel while touting the extreme robustness and resistance of its forebears. Since then, Casio has parlayed its metal transformation process into a successful formula. This is further demonstrated in recent years by the introduction of the hugely popular G-Shock GMW-B5000 series (the original G-Shock design in metal), as well as high-end artisanal creations in the MR-G catalogue featuring traditional handcrafted finishes and decorative work. 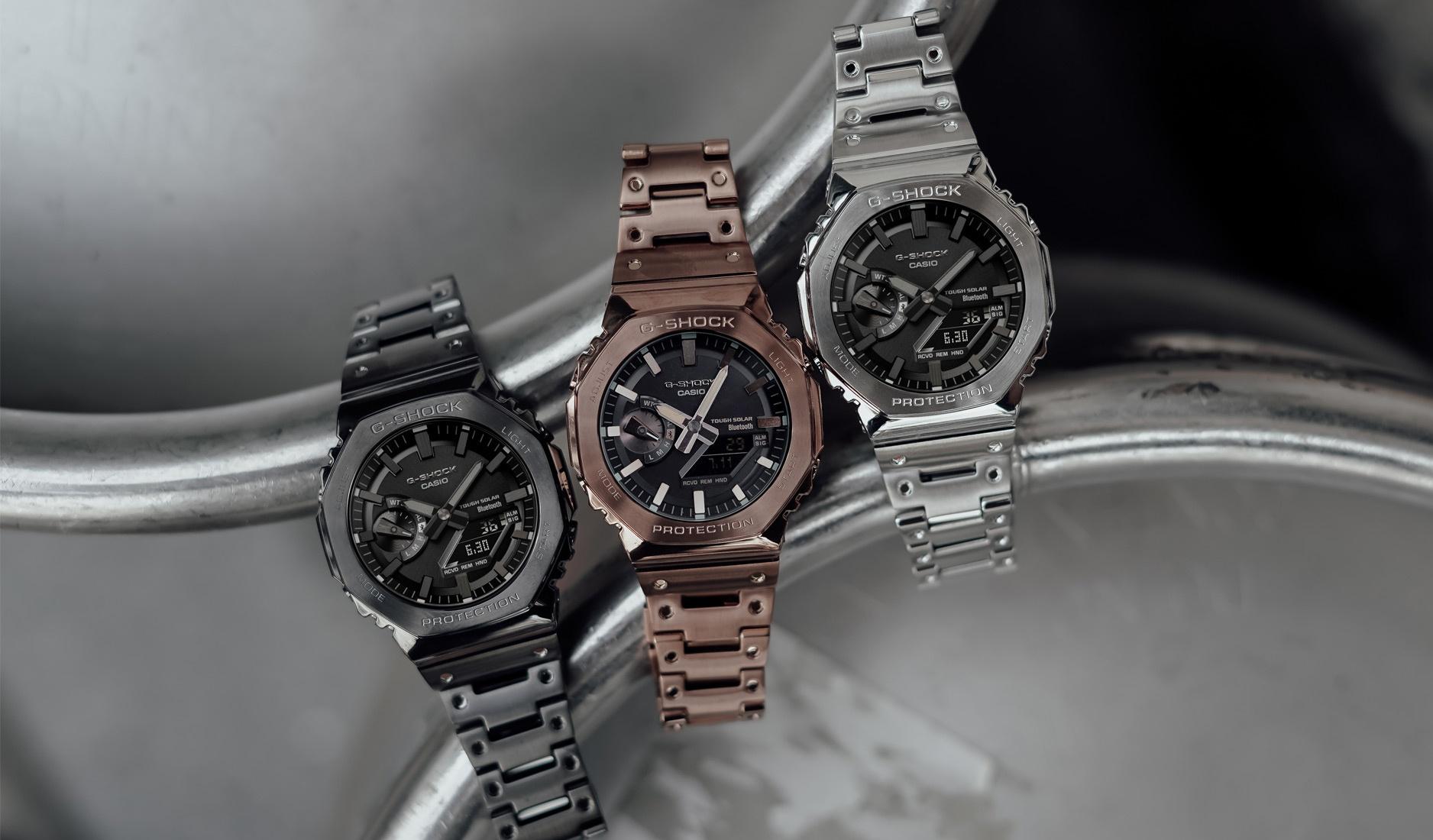 For its latest metal mash-up, Casio dresses the hottest new addition to the G-Shock family, the GA-2100, in stainless steel. Having made its debut in 2019, the GA-2100 is recognised by its octagonal bezel and analogue-digital displays. The bezel, especially, reminded watch buffs of Audemars Piguet’s iconic Royal Oak, which earned the collection the cheeky nickname ‘CasiOak’ and quickly garnered it a slew of fans.

The new full-metal GA-2100 models are housed entirely in stainless steel, and the collection’s switch-up from a resin to metal chassis is sublime. It is as if the GA-2100 is born to be housed in metal. Available in silver (GM-B2100D), black ion-plating (GM-B2100BD), and rose gold-plating (GM-B2100GD), the new models will give the already popular ‘CasiOak’ line a huge lift. 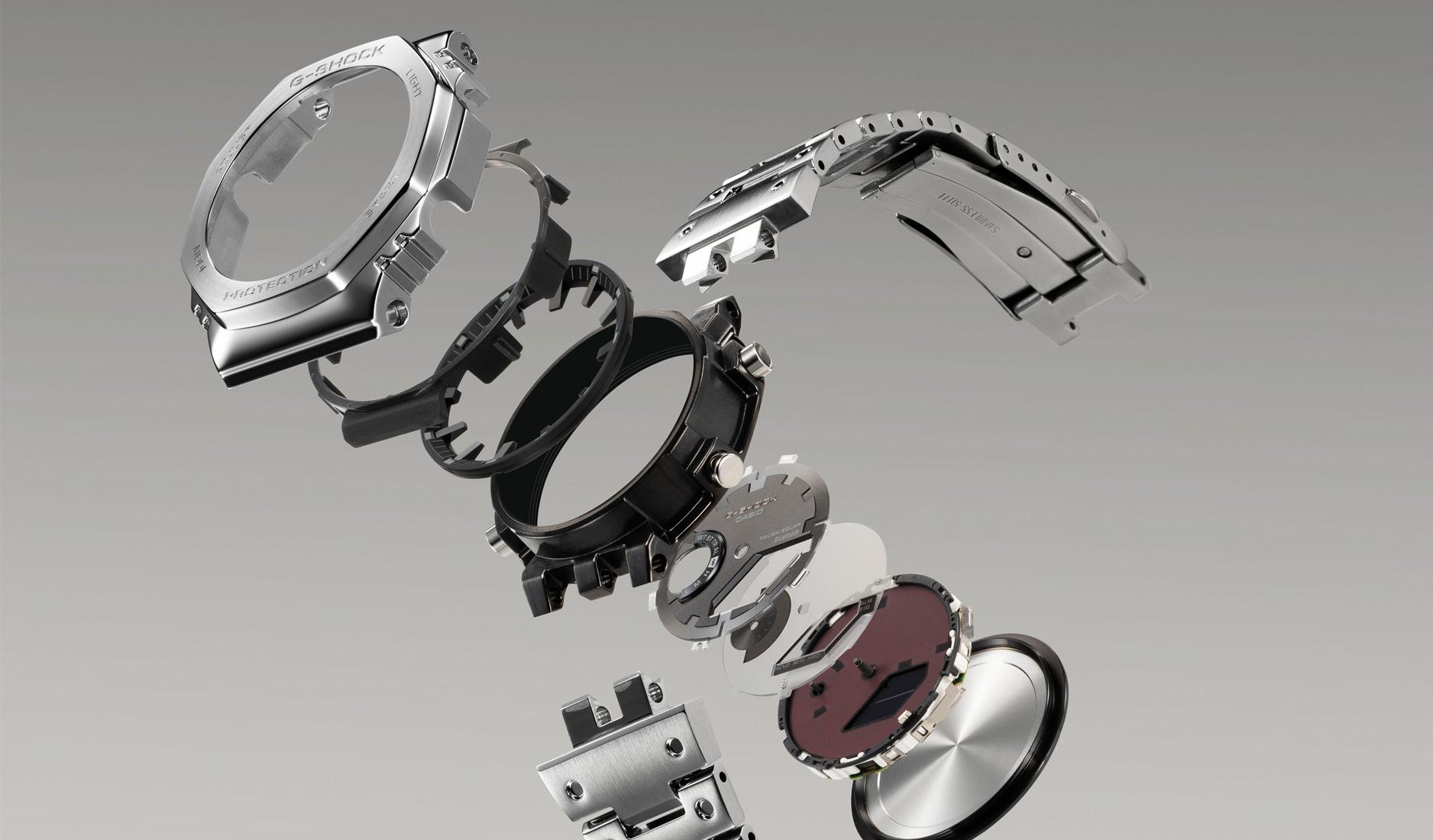 The metal construction allows for a greater scope of finishes on the GA-2100, which in turn, accentuates the beautiful profile of the watch. For instance, the contrast between circular and vertical brushed finishes on the bezel and bracelet, respectively, and mirror polish on the caseback, instantly elevate the watch’s demeanour. Inside, the GA-2100 is fortified by an internal shock-resistant harness that secures the watch module – the same shock-resistant system used in the GMW-B5000 collection.

Like previous GA-2100 models, the new variants are utilitarian beasts. Besides bearing renowned toughness and accurate timekeeping, the watches feature Casio’s proprietary ‘Tough Solar’ charging system, which eliminates the need to regularly replace the battery, and Smartphone Link connectivity via Bluetooth to connect the watch to your mobile phone. This is some beauty with brains – and a lot of steel. 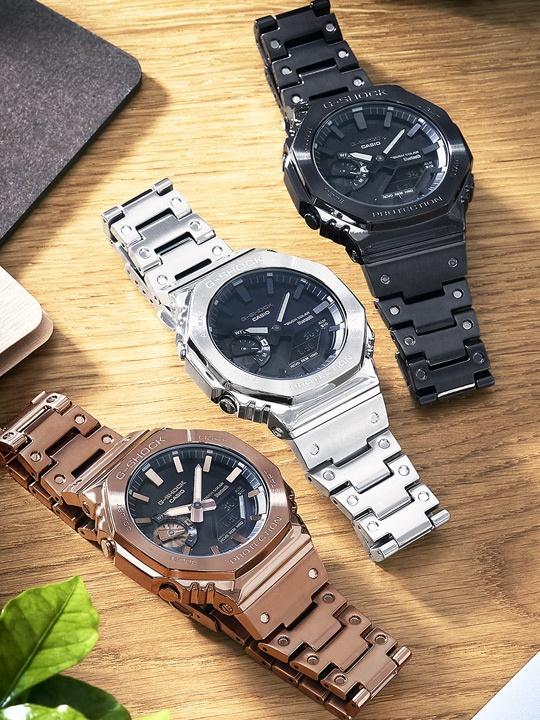