A rainbow connection unlike any other.

When we first laid eyes on the new Casio MTG-B1000RB, we couldn’t quite make sense of it. The metallic multi-coloured-hued case was certainly eye-catching, radiating vivid hues that recall those you’d find in a gasoline rainbow. But while stunning, it also had a capricious quality that seemed more suited to a regular G-Shock, as opposed to its slightly elevated MT-G line.

But the playful disposition invites closer inspection, and a more careful scrutiny certainly revealed depths of aesthetic nuances and details that will sway the neutrals, as it did for us. 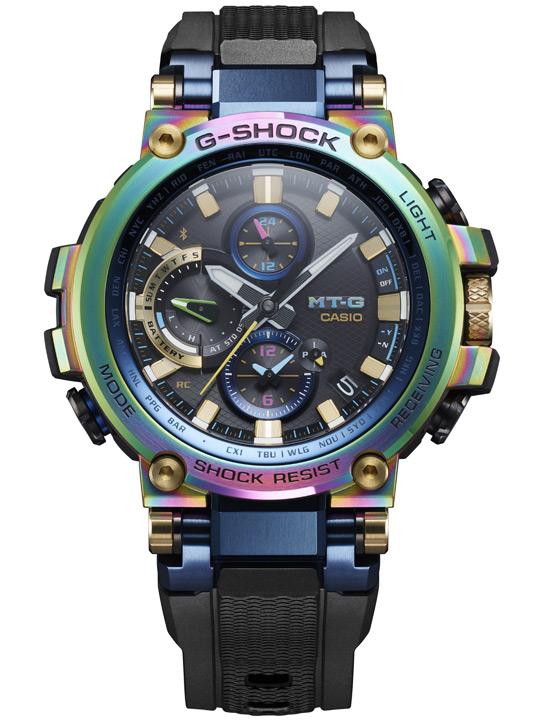 Created to commemorate the 20th anniversary of the MT-G collection, a range of G-Shocks that incorporates metal with the latter’s unique resin construction while still offering the iconic watch’s super shock-resistant virtues, the Casio MTG-B1000RB makes an ideal anniversary edition.

Those familiar with the MT-G’s metal-resin combination know that the feat is made possible with Casio’s proprietary ‘Core Guard Structure’ (above), which provides a fortified case chassis that forms a tough metal frame, protecting the watch from extreme shocks and linking the bezel and back cover with planar parts.

Band structure of the watch

The multi-hued case not only conjures a celebratory vibe, it shines an aesthetic spotlight on the MT-G’s metal construction, as the colourful tint is achieved by way of rainbow ion plating, a finish best showcased on metallic surfaces.

Examine the watch from different angles and you can see how beautifully the case refracts light to alter the colours. Elsewhere, a fine resin band completes the look and further reinforces the duality of the MT-G’s construction. It is not often that a G-Shock watch gets this cerebral, and for a commemorative edition, the MTG-B1000RB pairs beauty with brains to stunning effect.