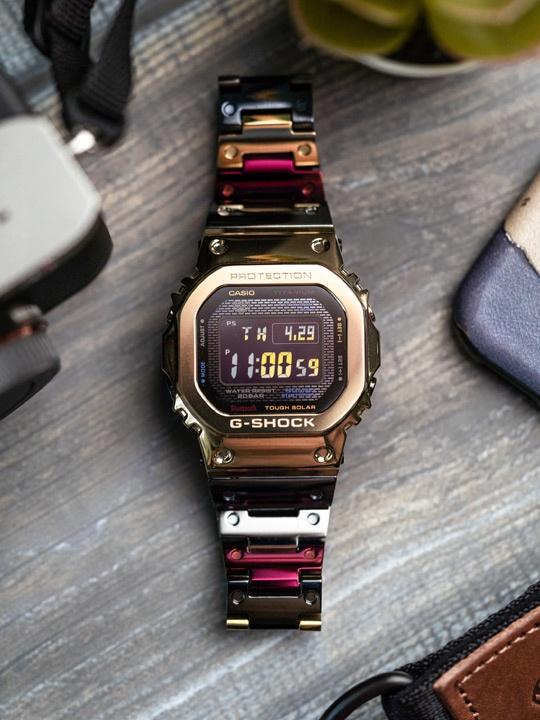 ITS ROOTS STRETCH BACK TO THE OG G-SHOCK
A big reason why Casio’s GMW series of metal G-Shocks have struck a chord amongst watch fans is that it has direct lineage to the original Casio G-Shock from 1983. Known as the DW-5000C, the first-ever G-Shock featured a distinctively thick urethane resin rectangular case with fin-like motifs at the corners, and strap with rivet-style indents. The original’s iconic aesthetic features, as well as the collection’s famed extreme shock-resistance and performance were replicated on the first Casio metal G-Shocks, the silver GMW-B5000D-1 and gold-plated GMW-B5000TFG-9, which were launched in 2018. 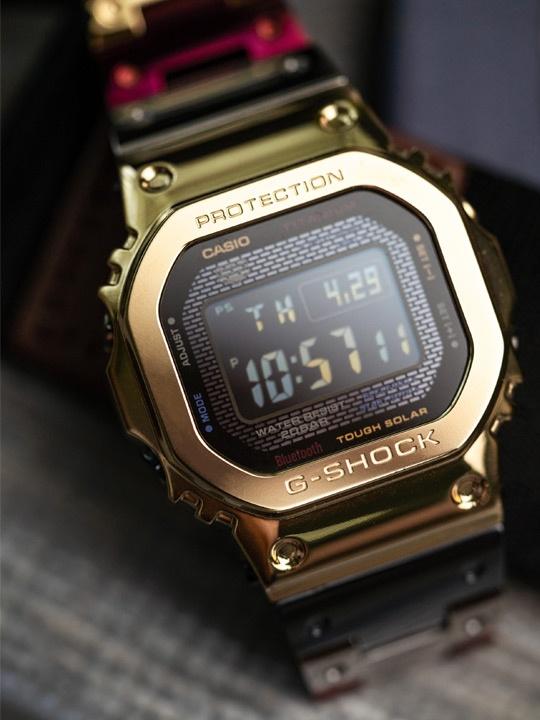 IT TOOK SIX YEARS TO DEVELOP
At the heart of the new Casio G-Shock GMW-B5000TR is the watch’s breakthrough in material experimentation, which took six painstaking years of research and development. But Casio didn’t do it alone. The project was carried out in collaboration with Nippon Steel Corporation, a pillar of Japan’s metal industry. 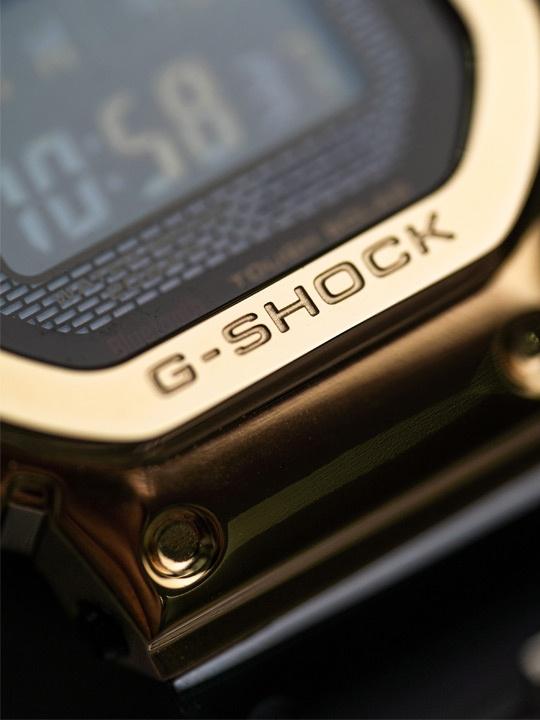 IT PREMIERES A NEW AND EXCLUSIVE TITANIUM ALLOY
Remember the name: Tran Tixxii. It is name of the brand jointly developed by between Casio and Nippon Steel, which created the exclusive titanium alloy that now encases the new G-Shock GMW-B5000TR. Regular titanium is known to be extremely hard, registering about 396 Vickers. The Tran Tixxii titanium alloy promises to be twice as hard, while still boasting attributes such as being super lightweight (titanium is known to be twice as light as steel), anti-corrosive, and hypoallergenic. 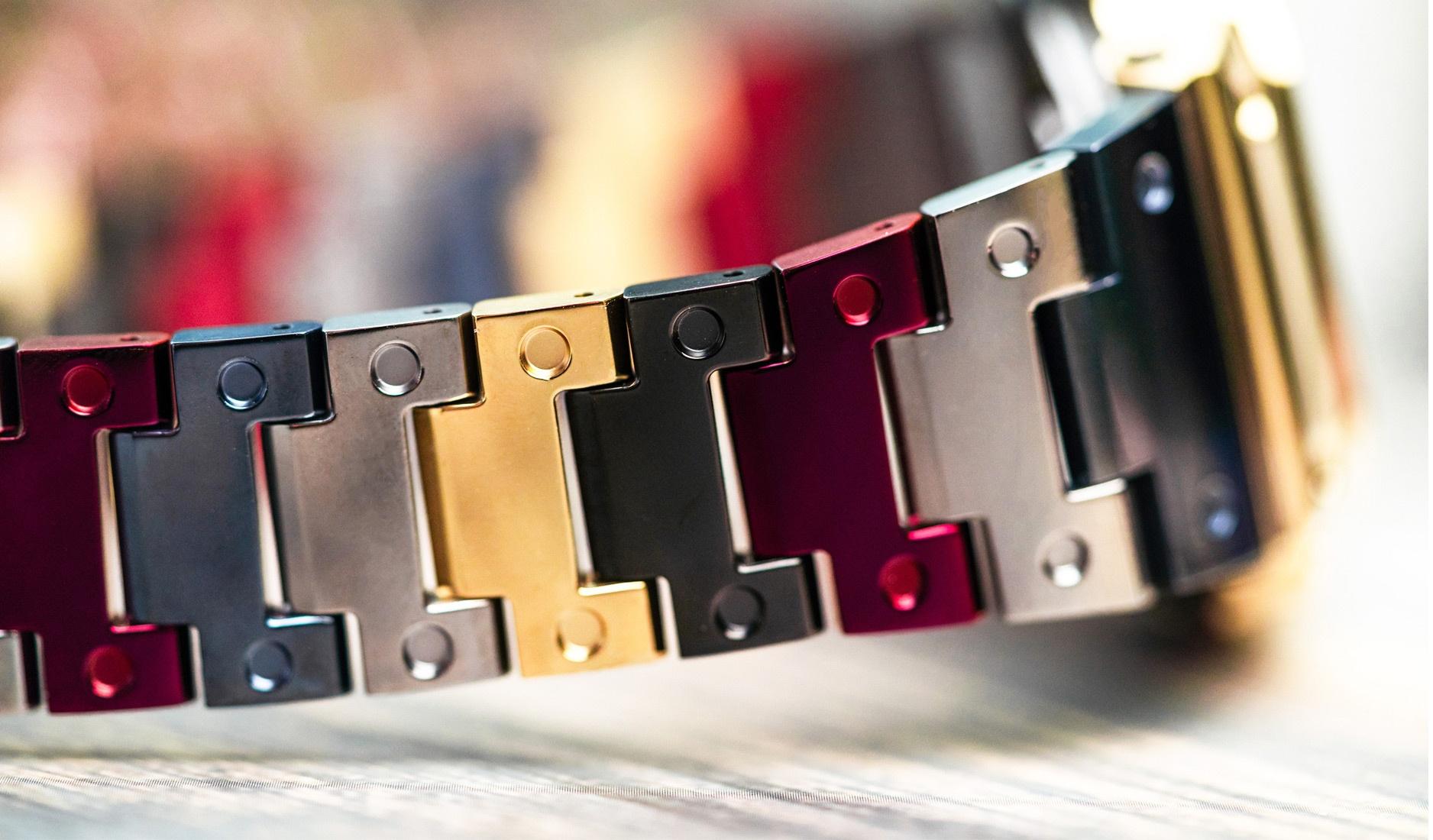 IT HAS THE LOOKS TO MATCH THE TOUGHNESS
Naturally, the superlative robustness of the new titanium alloy further fortifies the G-Shock watch’s famed ultra-toughness and resistance. At the same time, the newfangled metal has added a shiny new allure to the G-Shock aesthetic.

The new G-Shock GMW-B5000TR features a mirror-polished bezel and bracelet that is comparable to those found on steel components – previously unachievable on titanium parts, but now made possible by the new alloy’s ultra-hardy feature. The same attribute also accentuates the sheen of ion-plated surfaces, and Casio’s designers have taken full advantage of the discovery by sheathing the bracelet links in ion-plated gold, grey and red, to complement the gold ion-plated case. It is a truly multi-coloured metal G-Shock – another first for the iconic collection. 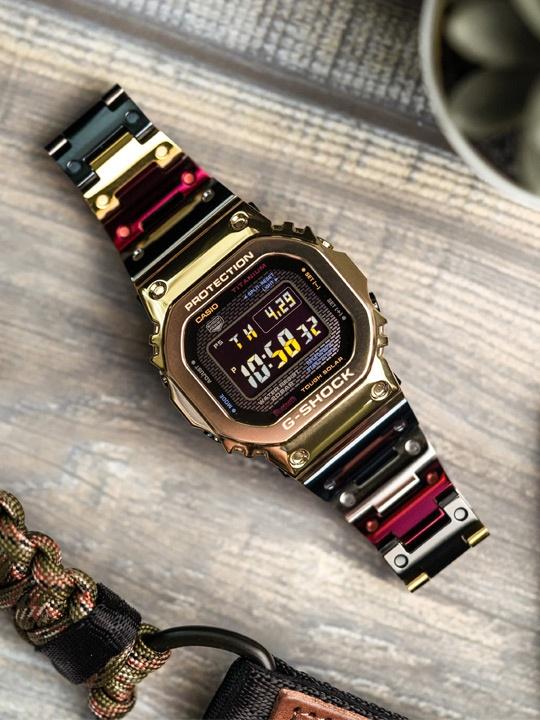 THE RETRO-FUTRISTIC LOOKS COME WITH PRACTICAL TECH
Now that we are well-acquainted with the innovations that take place outside the G-Shock GMW-B5000TR, it helps to be reminded of the myriad tech inside the watch that have made the collection such a force to be reckoned with over the decades.

All G-Shocks are developed based on Casio’s famous ‘Triple 10’ concept of ultimate toughness: minimum 10m free-fall endurance, at least 10-bar water resistance and at least 10 years of battery life. At the same time, the GMW-B5000TR features multiple inner housings inside the case for a cushioning architecture to protect the digital module, and manifold protrusions to protect the pushers and screen. Last but not least, underneath the watch’s multi-hued metallic charms, is a teched-up digital module that features Casio’s proprietary Tough Solar Power system, as well as displays of all the essential time-telling information and more, including Smartphone Link functionality for automatic time adjustment, five world-time displays, and multi-alarm setting.