They say good things come in small packages and we couldn’t agree more. Especially when it comes to Bvlgari’s Piccolissimo, a new micro movement hidden in a gorgeous secret watch, the Serpenti Misteriosi. 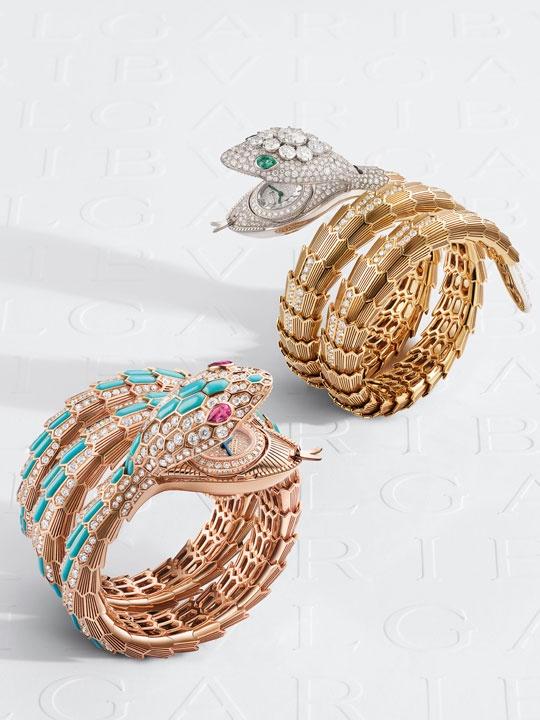 No stranger to miniaturisation—after all, the Maison is the proud creator of the award-winning Octo Finissimo watches—Bvlgari scales back the new calibre BVL100 in a very different way indeed, taking inspiration from the diminutive mechanical motors that used to drive women’s watches up till the early 1970s.

Weighing in at just 1.30g, the BVL100 lives up to its Piccolissimo (‘very small’ in Italian) name with a 12.30mm diameter and 2.50mm thickness. Measuring just 5mm in diameter, the barrel holds a mainspring that’s 170mm long and offers a 30-hour power reserve. 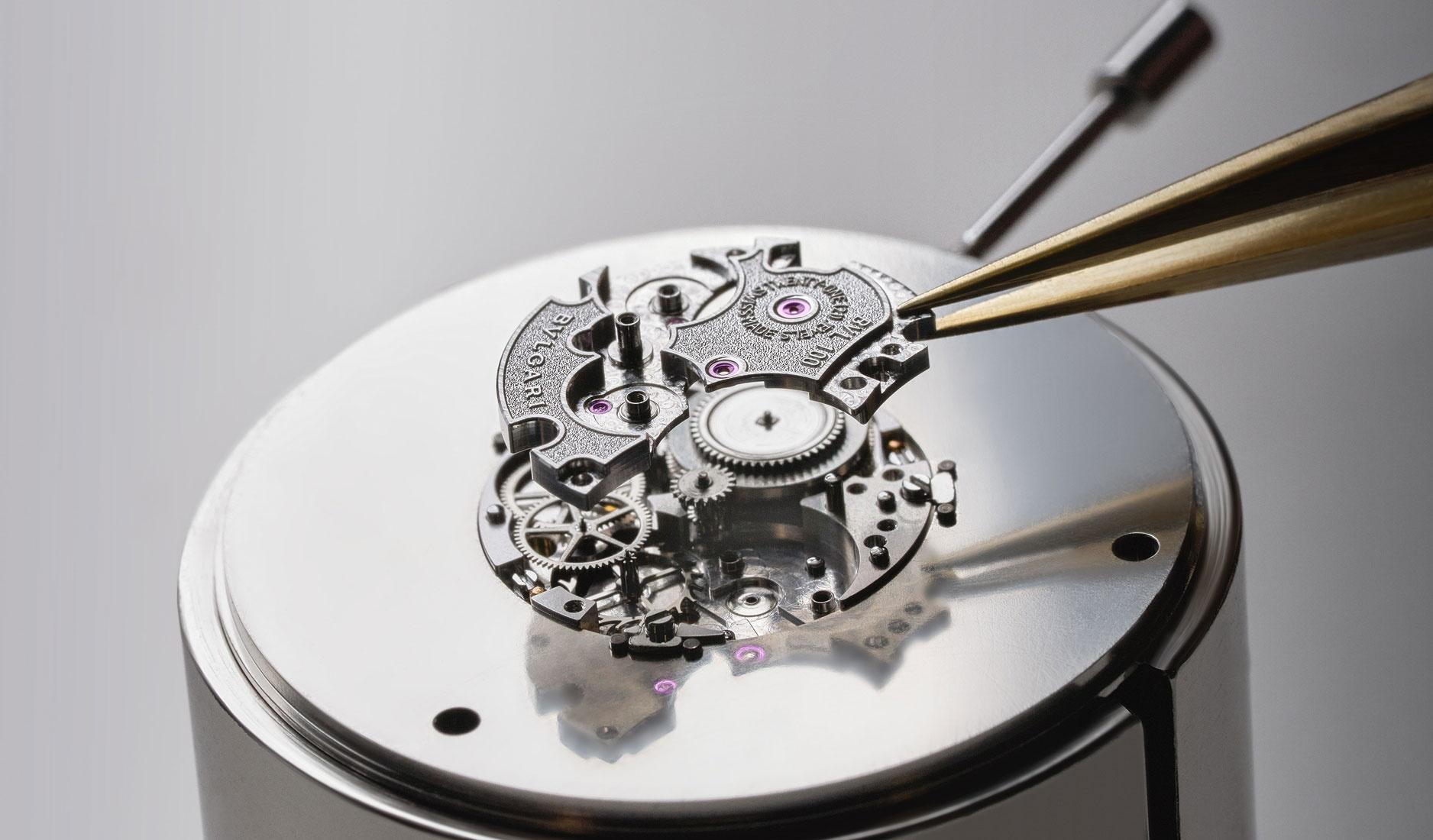 Taking two and a half years to develop, this compact movement finds itself in the head of the Serpenti and, for the first time, is completely removeable from the rest of the watch. The patented bi-directional crown allows you to both wind the watch and set the time. Pressing down on the serpent’s tongue pops its head open to reveal the dial inside. But unlike Serpentis of the past, you can push the dial down and slide it out of its holder. 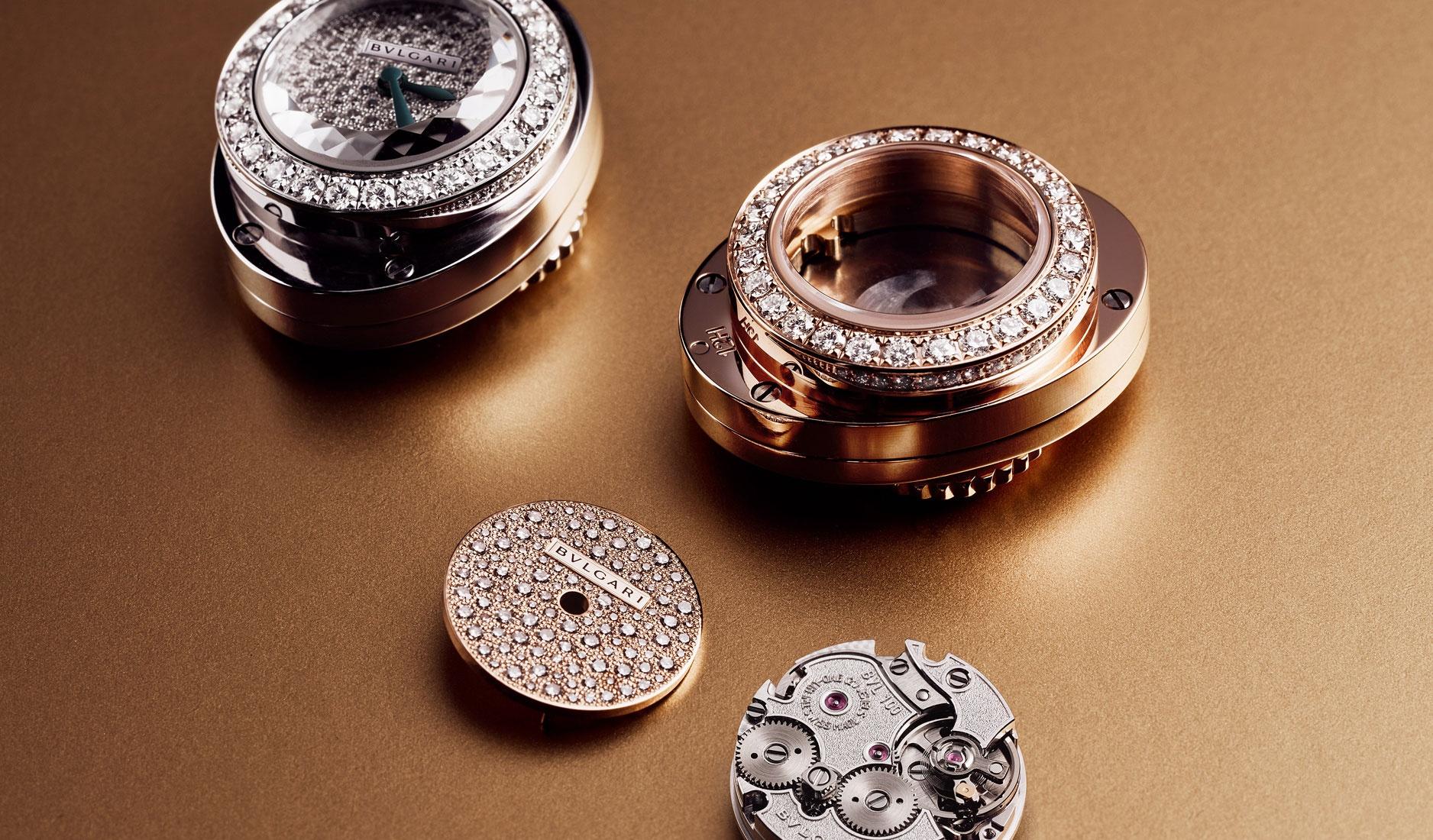 This nifty design means the dial can be replaced in either direction, allowing the owner to wear the watch on the left or right wrist without the dial appearing upside-down. Similarly, she can choose to wear it with the serpent’s head pointing up or down. But perhaps most crucially, the detachable function means the movement can be sent for servicing without the bracelet which, with its precious metal and stones, can still be worn or put away for safekeeping with the owner. 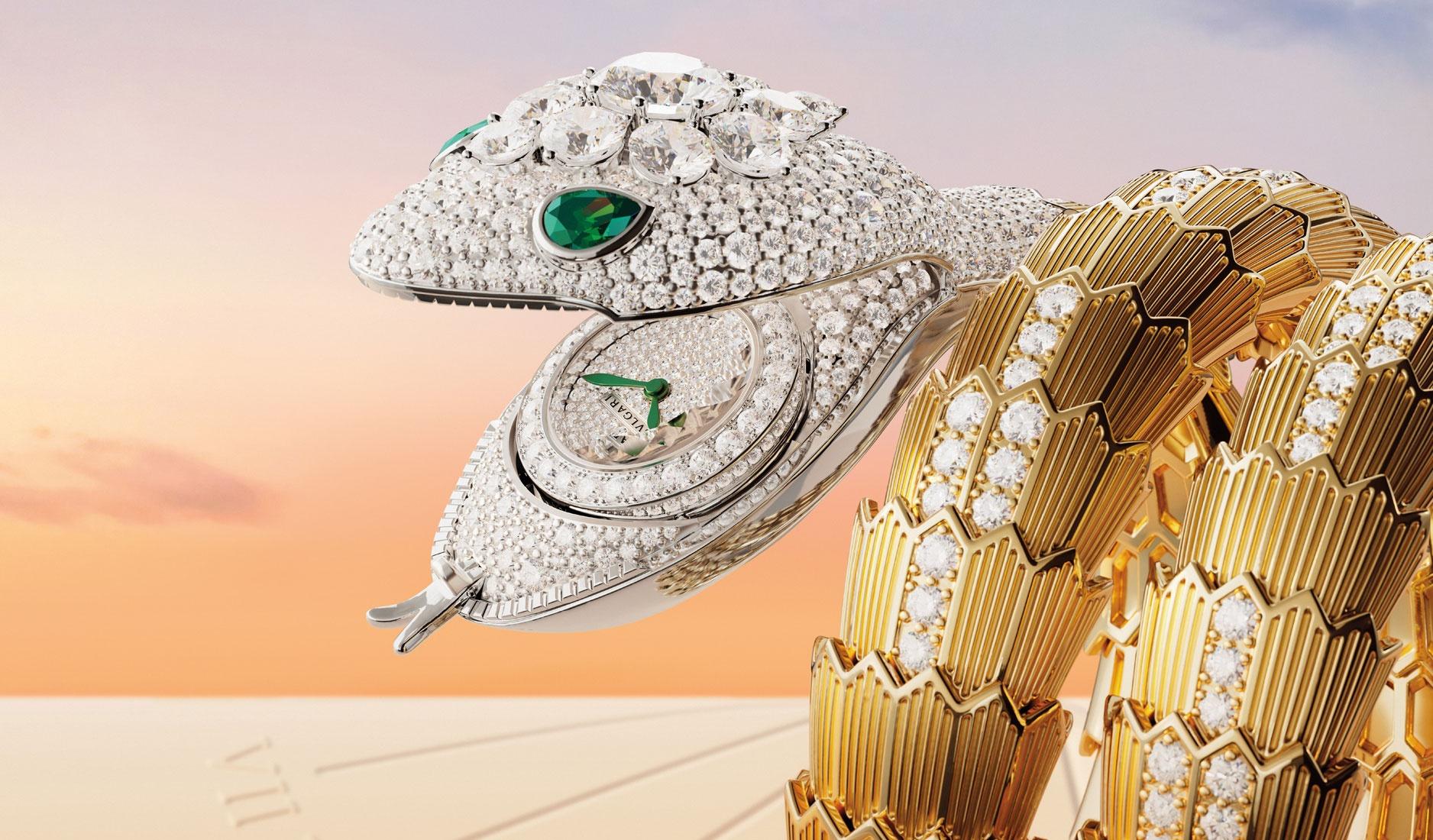 Introduced in the late 1950s, Bvlgari’s Serpenti secret watches oozed glamour and sophistication, epitomised by none other than the legendary Elizabeth Taylor, herself a fan of the Maison.

With the new Serpenti Misteriosi, that same glamour lives on in four precious variations. The yellow gold option comes with a diamond paved head comprising a large round-cut diamond surrounded by pear-shaped diamonds. The total diamond count on this creation? A staggering 795, at approximately 16.59 carats.

One of the rose gold versions features a combination of turquoise and diamond scales set by hand, with the brightly hued inserts offering a pop of contrast to the feminine blush of the rose gold bracelet. 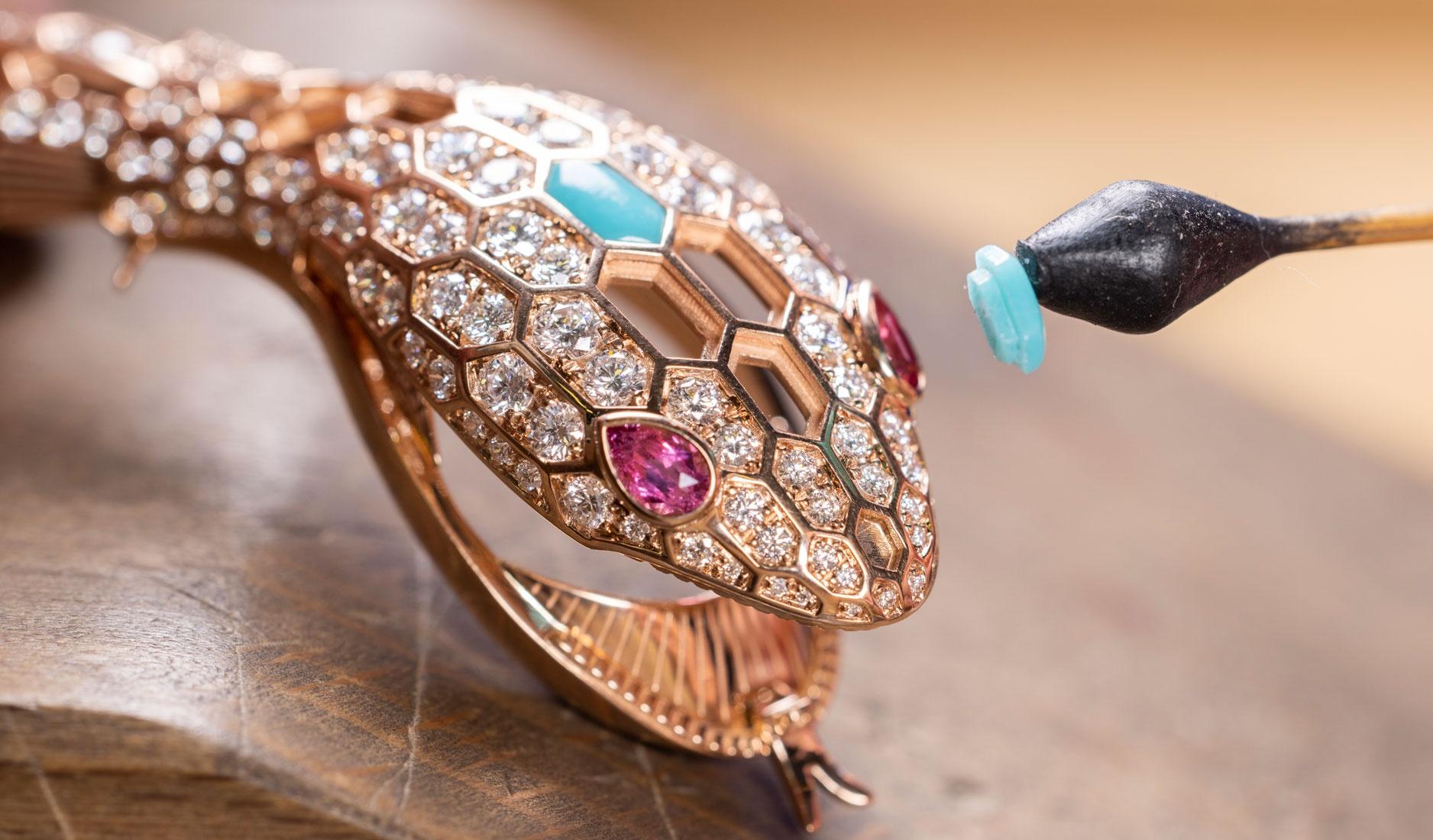 The remaining two versions in rose and white gold are given a lacquer treatment for a lustrous shine. Hexagonal scales are hand-applied with semi-transparent lacquer that’s filled and dried repeatedly for a glittering effect. Underneath, the striped pattern of the metal stands out through the glossy finish, giving added texture to the creation. 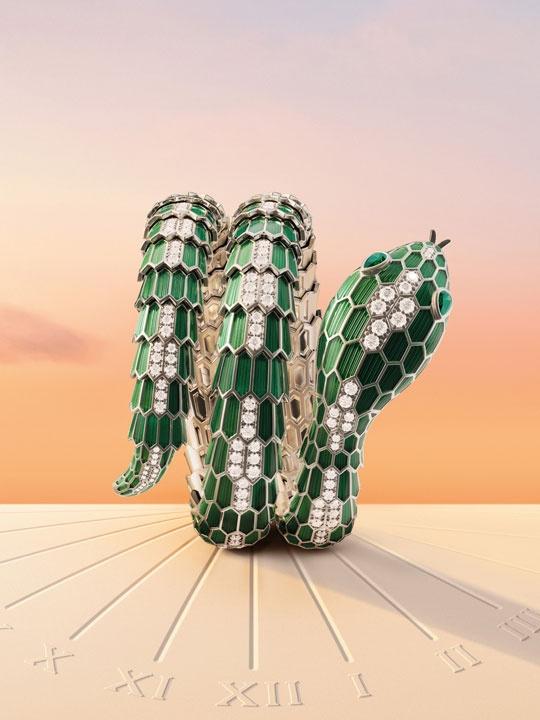 Depending on the model, pear-cut diamonds, emeralds or rubellites depict the serpent’s eyes. Contrary to what one might expect the countenance of a serpent to be, the Serpenti Misteriosi actually looks friendly and playful; almost smiling, in fact.

While current world affairs haven’t given us much to smile about in recent times, the cheerful Serpenti Misteriosi collection is certainly a welcome distraction, not to mention, gorgeous embellishment on the wrist, and a reminder that beautiful craftsmanship can lift our spirits, even in difficult times.