Written by Curatedition on 30 August 2021. in Bulgari Articles.

The Colosseum was the largest amphitheatre of the ancient world. Despite having a massive structure that could accommodate up to 80,000 spectators, its construction took just eight years to complete, from 72AD to 80AD. After nearly two millennia, it remains the largest standing amphitheatre in the world – with design principles that continue to inform the layouts of modern stadiums today.

Rome is littered with wonders just like the Colosseum. These architectural feats don’t hail from any single period, but share the same nuanced approach to balancing aesthetics with functionality. Collectively, they have long influenced artists, architects, and urban planners alike, while also serving as a source of inspiration for many other industries. One seemingly disparate one is watchmaking. Here, Bvlgari has translated these landmarks’ forms into its watches’ designs, to create an inimitable line of iconic timepieces. Naturally, it’s only fitting that the brand itself was founded in Rome, with the collection – the Octo Roma – named after the city as well. 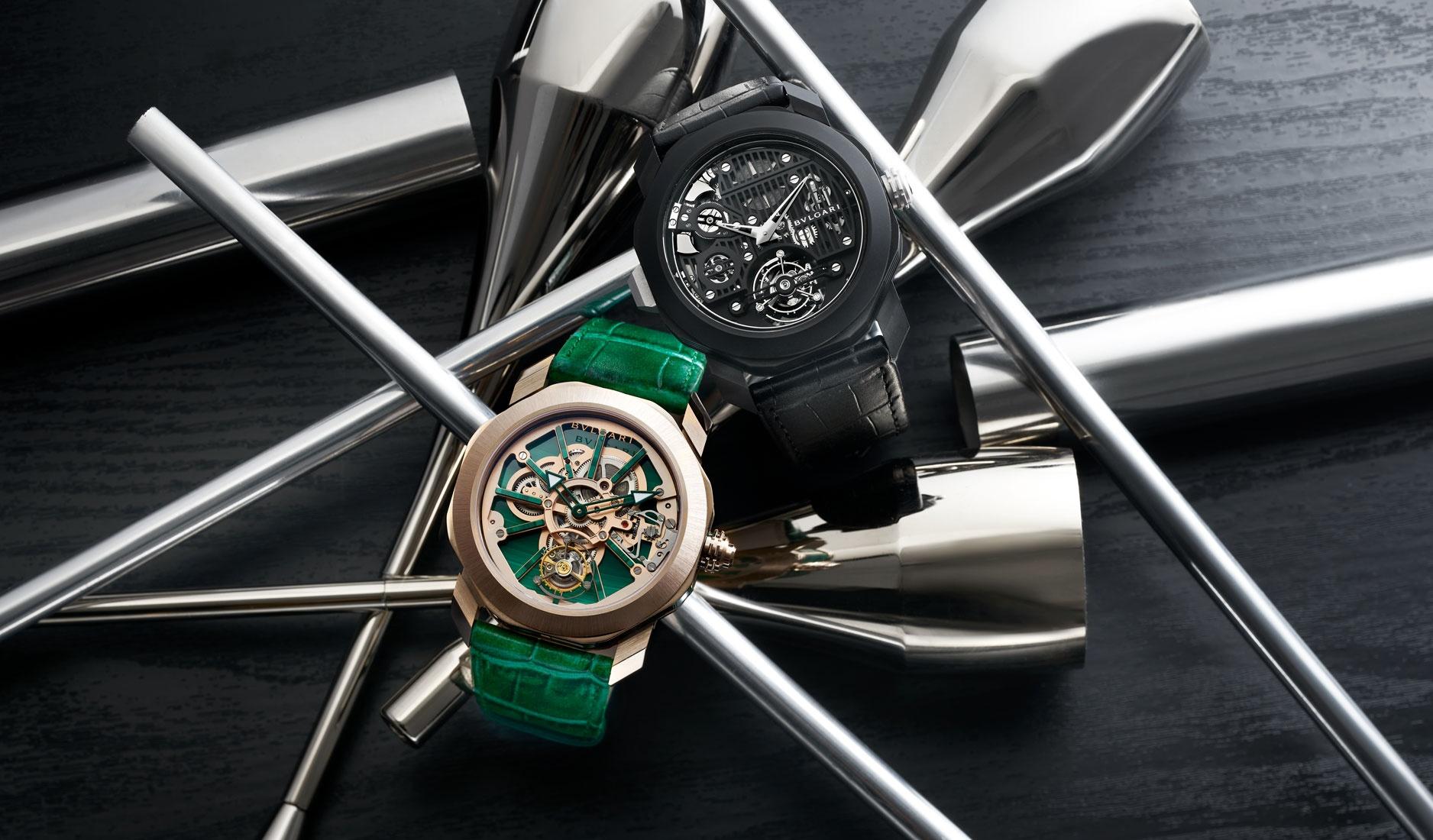 The Octo Roma
First introduced in 2017, the Octo Roma is an offshoot of the Octo line that has long been a key pillar within Bvlgari’s line-up. The differences between the siblings are subtle – the Octo Roma sports a softer silhouette with rounded corners and edges, in contrast to the Octo’s keen lines and clean surfaces.

Bvlgari’s plans for the two appear to differ as well. Whilst the Octo has long been the platform for the brand to showcase ultrathin watchmaking, the Octo Roma’s development has been more varied. For the latter, high jewellery and high watchmaking have both featured prominently this year, as the following timepieces will show. 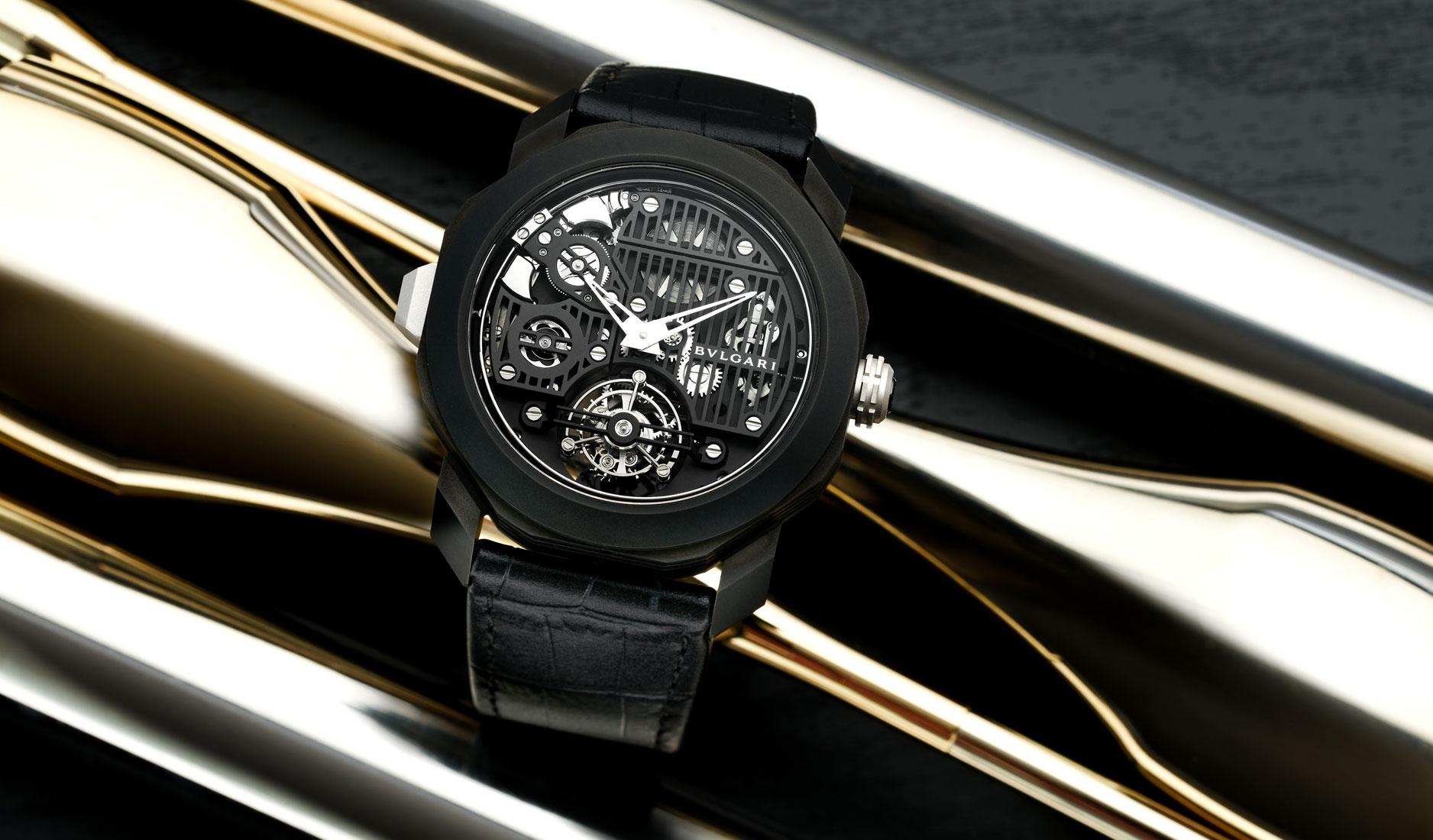 Every aspect of this timepiece has been designed and constructed around its minute repeater. Note its case, for instance. Although the movement is fairly slim at 8.35mm, the case has been maximised to measure 12.83mm high, which affords more internal space for the chimes to develop before propagating out of the case. Other (subtler) features include having the gongs fitted directly to the case for maximum resonance, as well as a skeletonised main plate to further improve the watch’s acoustic performance. Interestingly, the choice of case material is DLC-coated titanium in lieu of gold or platinum, which lends the notes of this striking watch a different timbre.

In terms of design, the all-black aesthetic is one that Bvlgari’s connoisseurs should be familiar with. This makes for a strong statement, but also one that’s markedly different from what one traditionally associates with luxury watchmaking, especially given the presence of a minute repeater in this timepiece. With this colourway, however, Bvlgari is able to offer an alternative that’s technical yet sensual, while also drawing attention to the Octo Roma’s iconic case design.

The Octo Roma Carillon Tourbillon will be produced in a limited series of just 15 pieces.

Cut From A Single Block
In contrast to the Octo Roma Carillon Tourbillon’s technical sophistication, the Octo Roma Naturalia spotlights a different aspect of Bvlgari’s watchmaking expertise. The reference featured here has a brushed rose gold case fitted with a skeletonised tourbillon movement, which sets the stage for its lead: malachite. This semi-precious stone is featured prominently on the dial and case middle, where it has been inlaid to seamlessly integrate with the movement and case respectively. 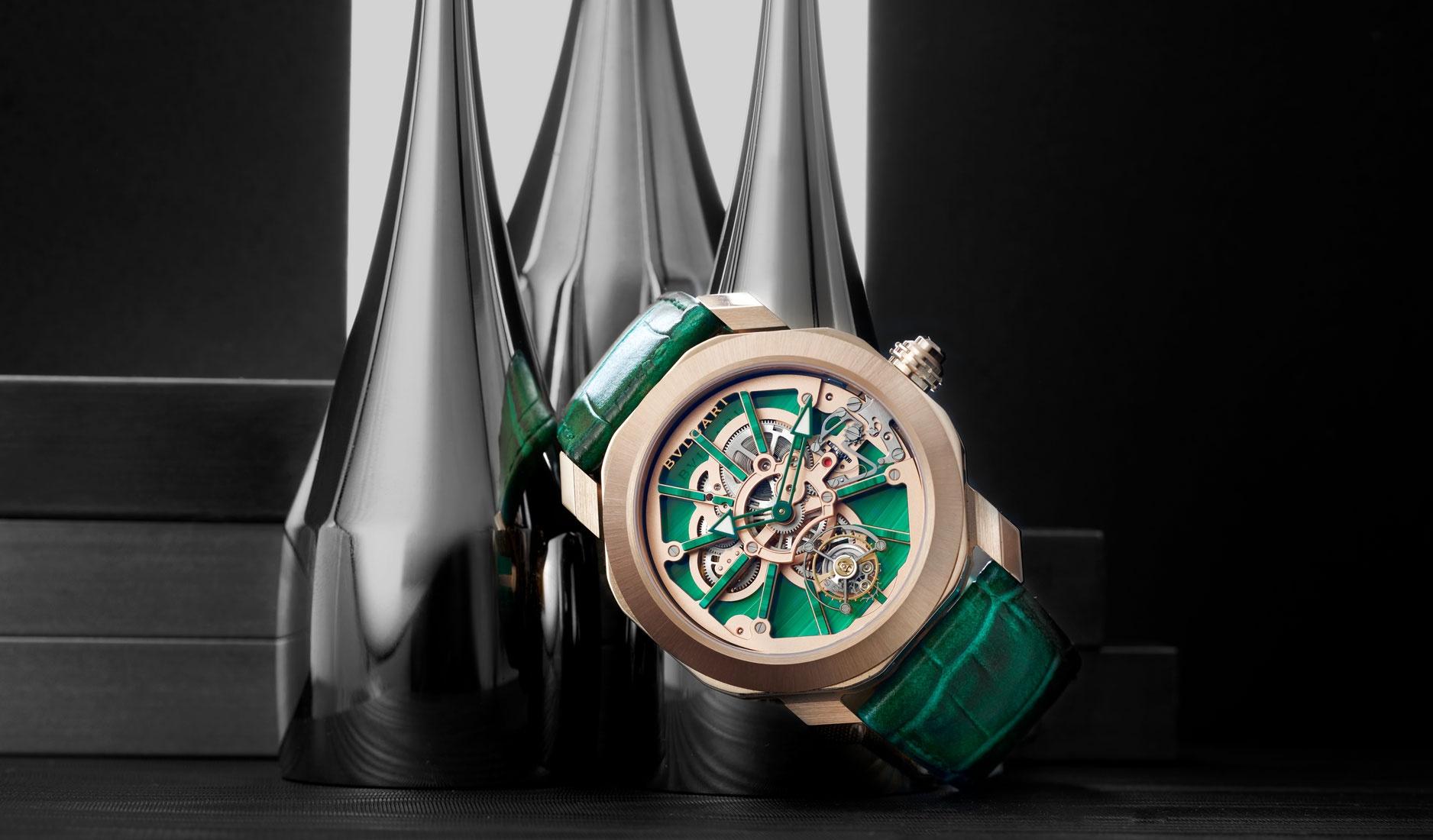 The catch here is how the watch’s malachite elements, despite being separate pieces, appear to form part of a greater whole. Indeed they are: to preserve the illusion, a single block of malachite was used for the watch. This allowed the craftsman to cut the necessary pieces of malachite while keeping their banding patterns as a unified whole – not unlike a bookmatched piece of timber or stone.

This timepiece is actually part of a series of three watches, with the other two themed on lapis lazuli and onyx respectively. The line doesn’t stop here though: the Octo Roma Naturalia was conceived as a customisable timepiece, with various choices available for the case material, bezel setting, as well as the anchoring stone/mineral. Around 30 different combinations are available, with the additional engraving on the case back to make the watch a truly unique one.

A Growing Family
The Octo Roma Carillon Tourbillon and Octo Roma Naturalia couldn’t be more different from each other, whether in terms of technical details, aesthetics, or design philosophy. Yet they clearly share the same DNA that identifies their lineage. Therein lies Bvlgari’s genius in translating the same design language across different timepieces. 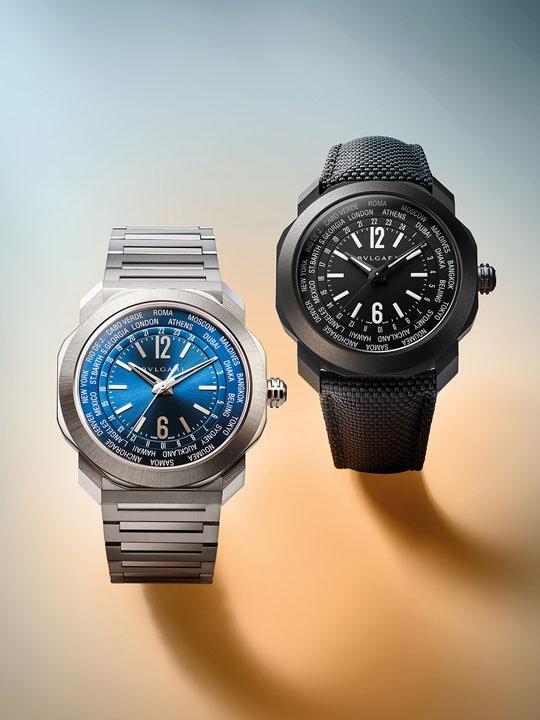 Bvlgari clearly has plans to explore other complications with the Octo Roma – just look at the two new models unveiled at the Geneva Watch Days event, which begins today. The first is the Octo Roma Worldtimer, which packs a previously unseen level of complexity into the Octo Roma’s dial thanks to its eponymous worldtimer complication. In contrast, the Octo Roma Central Tourbillon Papillon simplifies the display of time. This watch uses a digital jumping hours indicator at 12 o’clock, which is paired with a single pointer that runs along a 180-degree track marked with the minutes. We will, of course, delve further into these timepieces – and the others introduced at Geneva Watch Days – in future stories. 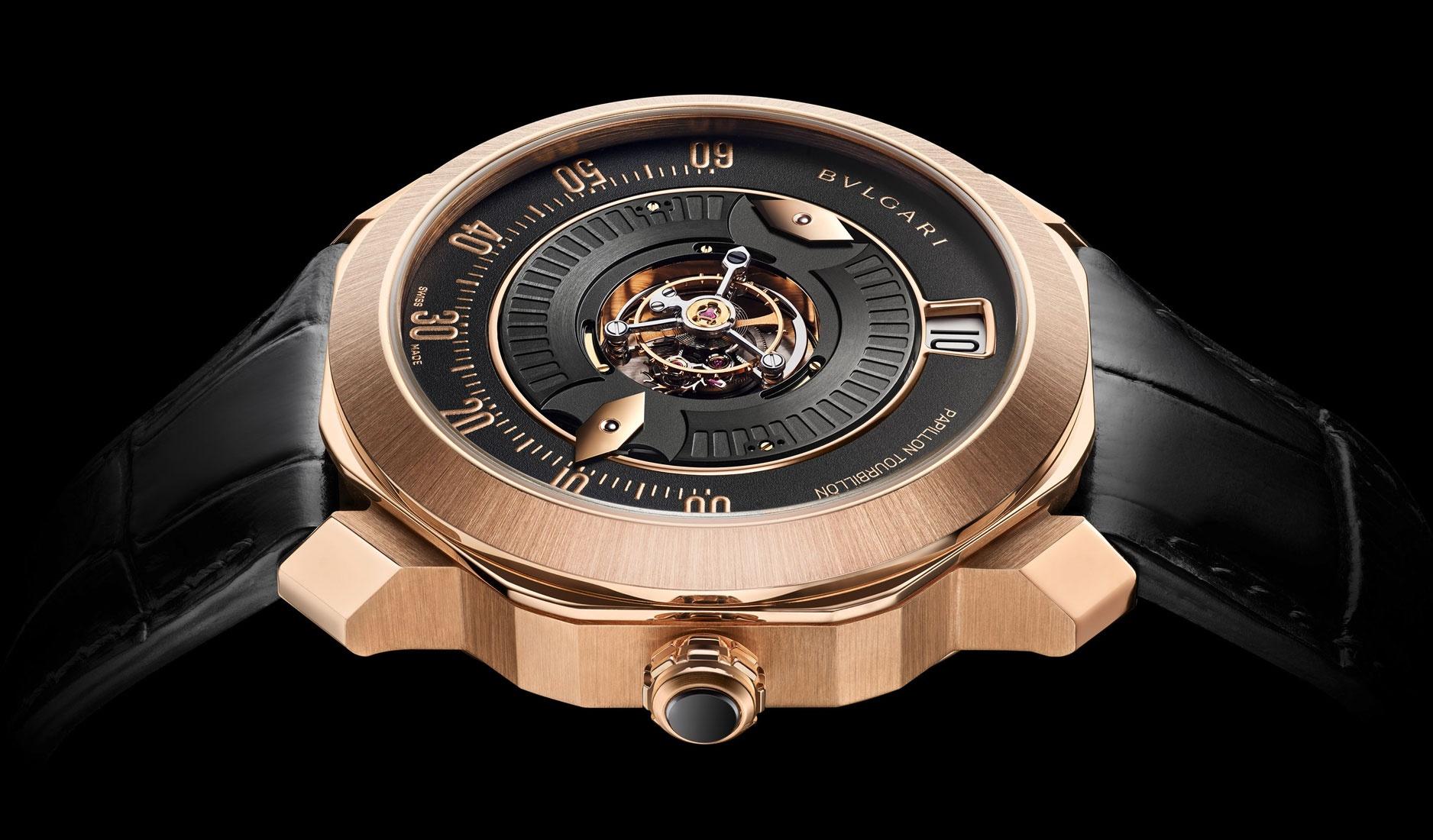 With its unique Italian sensibility that draws from Rome’s architectural icons, the Octo Roma has elevated itself to one as well.

This story first appeared in Curatedition.com.