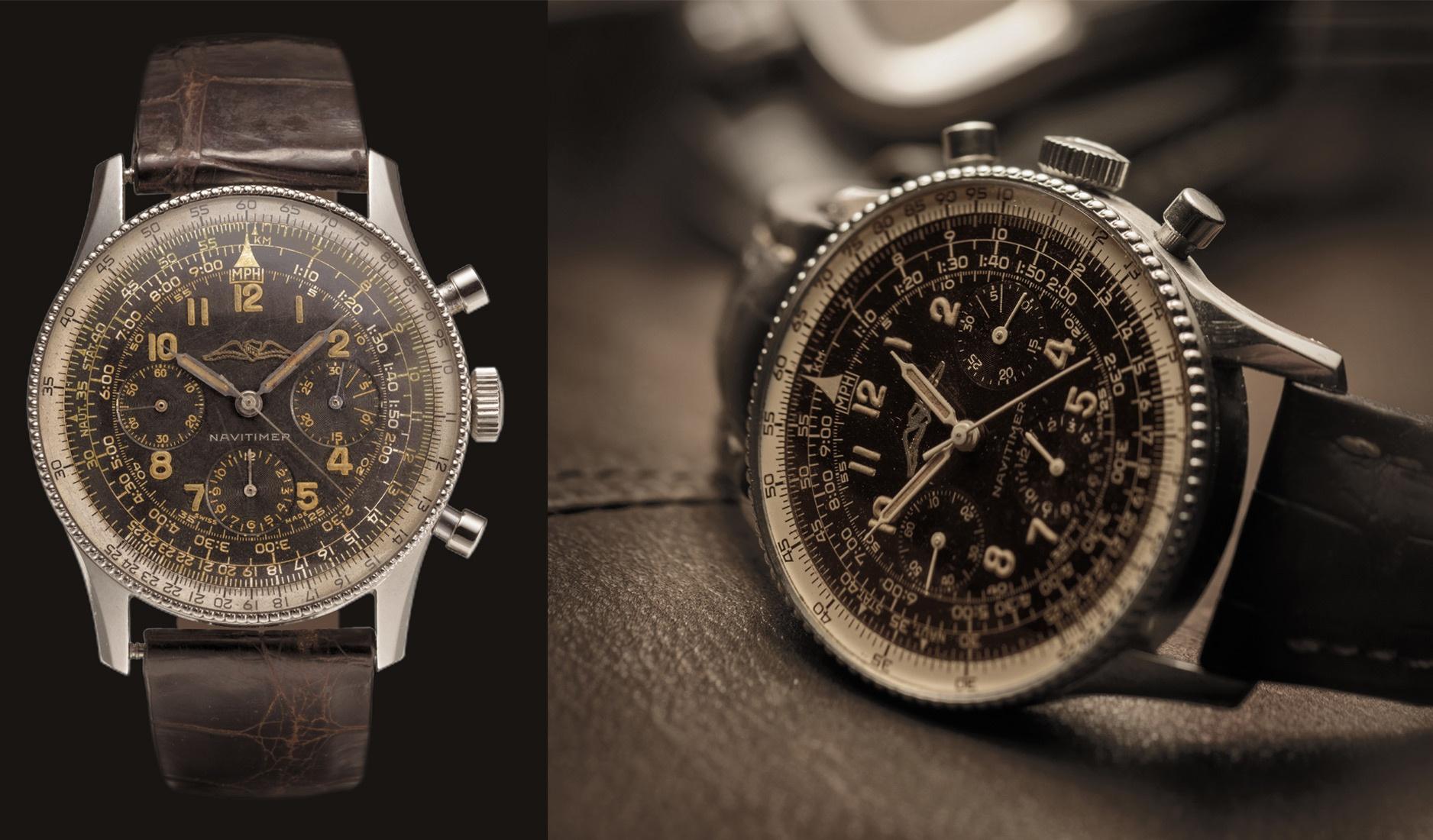 Vintage Breitling Navitimer from the 1950s

We’d be the first to admit it: the term ‘tool watch’ does get bandied about rather loosely these days. But we also know with absolute certainty that we are in the all-clear when we confer this descriptor on the Breitling Navitimer, an unequivocal powerhouse of a pilot’s tool watch that has been a trusted flight accompaniment for pilots for the past 70 years.

Easily also one of, if not the most iconic Breitling watch, the Navitimer is a chronograph distinguished by its circular slide rule encircling the dial, which allows pilots to perform all sorts of mathematical calculations from the plane’s fuel consumption to its rate of climb or descent, among others.

Although the first Brietling watch to feature a slide rule was the Chronomat from 1942, and the brand debuted its first chronograph back in 1915, the combination of both features by Breitling founder, Willy Breitling, in 1952 proved to be a masterstroke. The Navitimer (a mashing of the words ‘navigation’ and ‘timer’) officially came into being in 1954, when the Aircraft Owners and Pilots Association (AOPA), the largest aviators’ club in the world, announced the watch as its official timepiece and featured its winged logo on the dial at 12 o’clock – a design feature that, like the slide rule and chronograph functions, have since become emblematic of the collection.

Seventy years on, the Navitimer continues to be Breitling’s most recognised model. This is despite the collection evolving and expanding over the decades to include a variety of iterations that span multi-complications, to ladies’ offerings like the Navitimer 35 in 35mm cases that eschew the chronograph complication for time-and-slide rule-only display. To commemorate its 70th anniversary, Breitling turns back the clock on the Navitimer with an impressive assortment of models in a variety of cases sizes and dial colours, while flaunting a more streamlined, retro-inspired look without sacrificing the collection’s key features and functions. 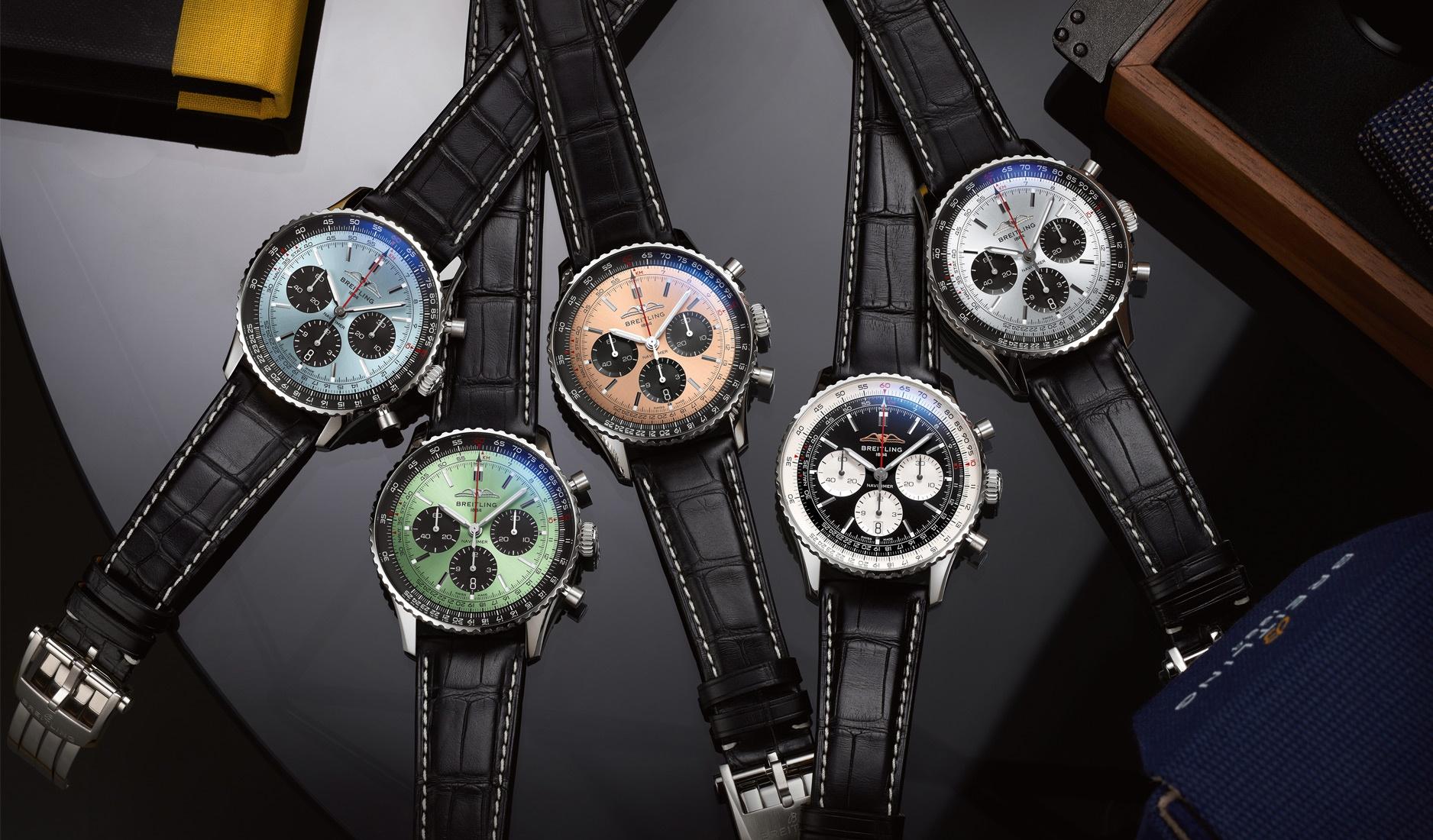 “This is a big project for us, which we finalised about a year ago,” says Sylvain Berneron, Breitling’s creative director. “I wore a Navitimer for eight months, both old and modern models, when we were working on the project to have a feel of what we needed to do for the 70th anniversary models.”

The 2022 range of Navitimers come in 46mm, 43mm and 41 mm stainless steel or red gold case, complement by matching seven-row metal bracelets or semi-glossy alligator leather straps. Regardless of the reference, the watches are all powered by Breitling’s Calibre B01 automatic chronograph movement. An epochal movement that debuted in 2004, the Calibre B01 was Breitling’s first-ever in-house movement and it set the bar really high even from way back – an engine boasting column wheel activation and vertical coupling system for the tri-compax chronograph function, along with COSC-certified daily rate accuracy and 70-hour power reserve. 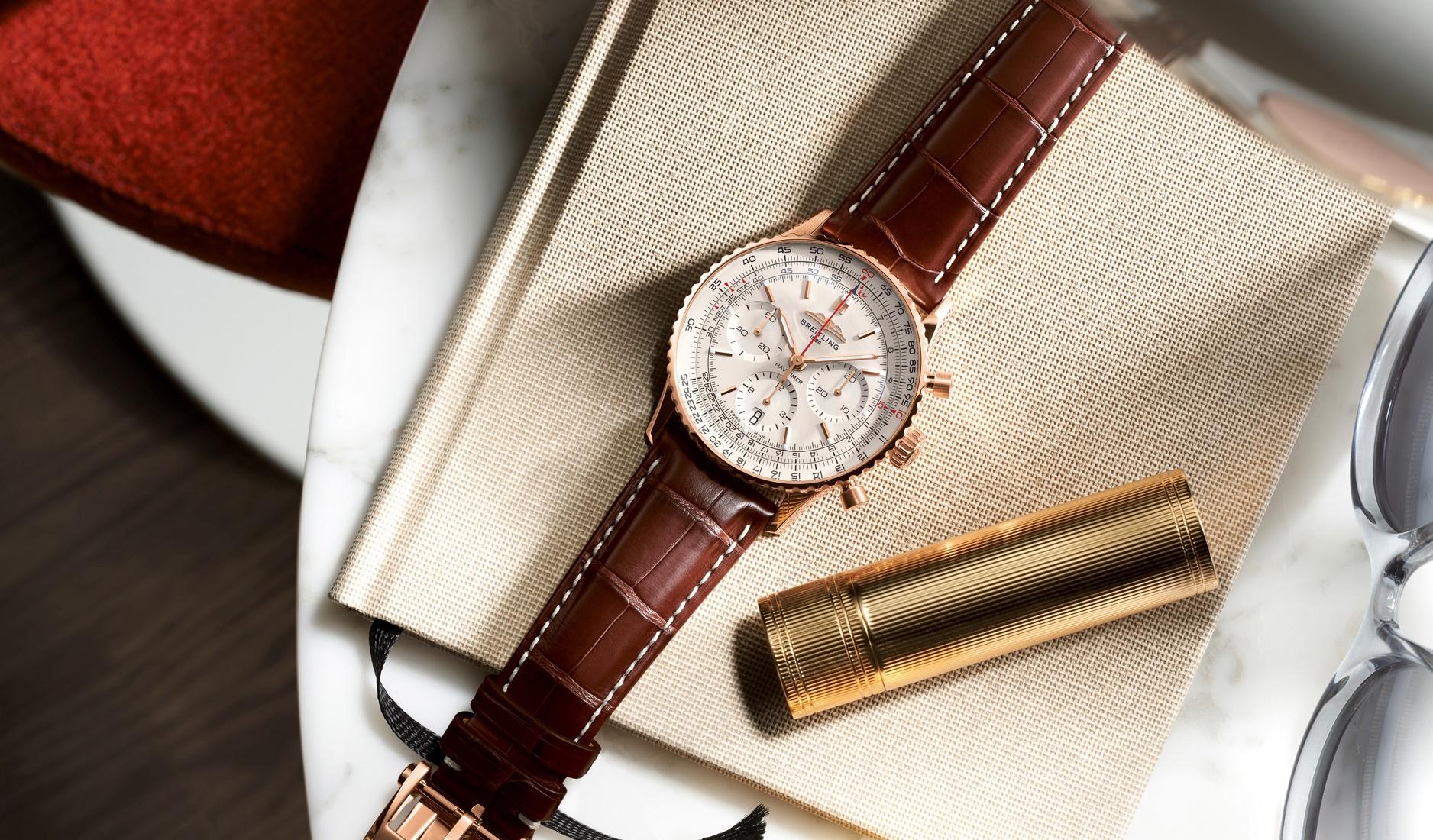 For us, though, the most interesting aspect of the new Navitimers is how effortlessly they have been imbued with Breitling’s ‘modern retro’ style. A look that evokes a throwback vibe while staying chic and contemporary at the same time, the ‘modern retro’ aesthetic permeates through all of Breitling’s recent creations and has proven effective in drawing long-time loyalists as well as young watch lovers into the fold.

A candy-coloured array that truly offers something for everyone, the dials come in a specific range of colours, depending on the case size and materials. For those who like their chronographs to look classic, there are steel options in panda or reverse panda-styles in black and white. For the more adventurous, dials are also offered in salmon, dark green, mint green and navy, amongst others, in steel cases. The pink gold models are more limited, paired with silver dial for the 41mm version, reverse panda- style for the 43mm model, and panda-style with silver base for the 46mm model. 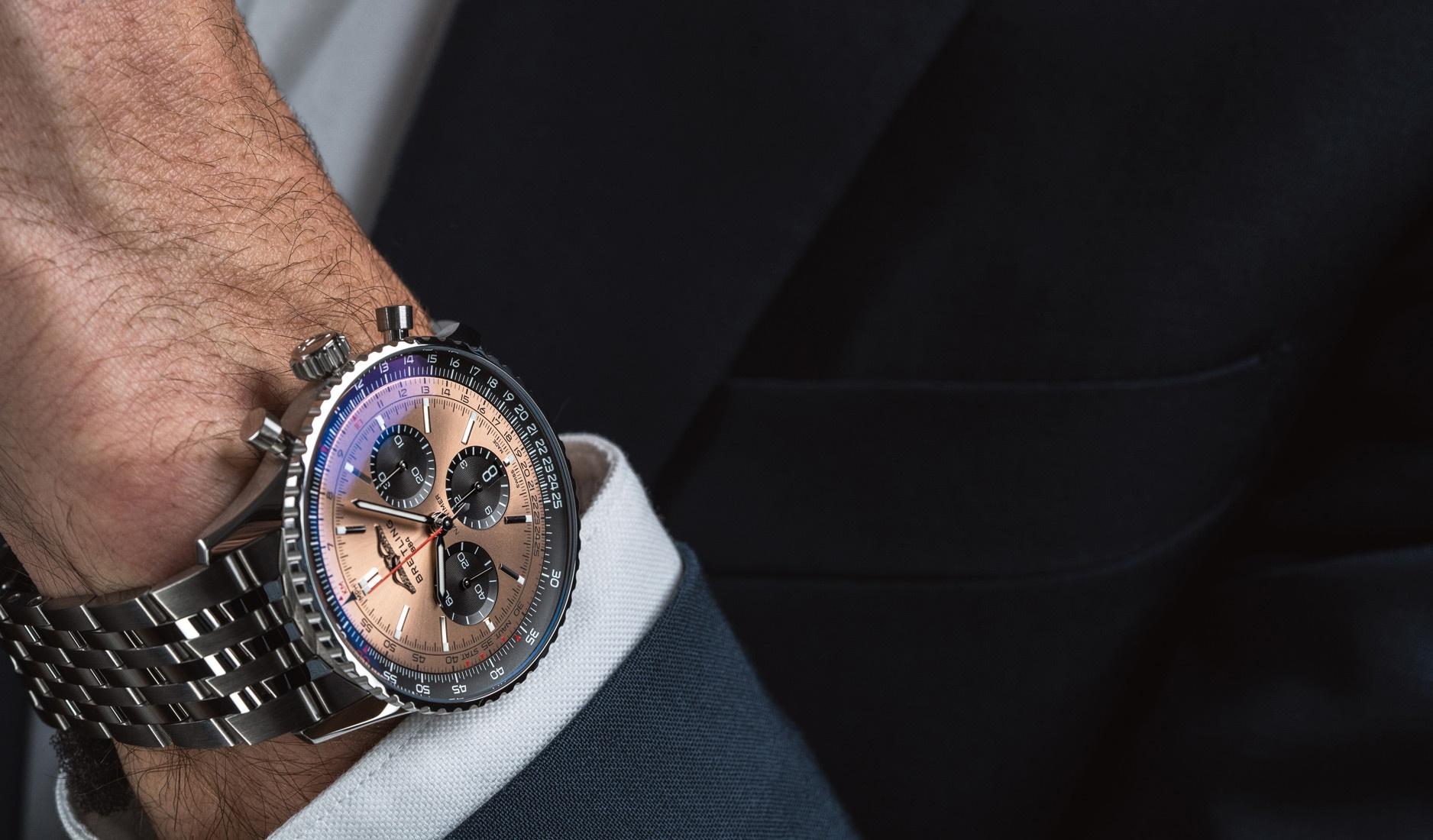 Besides the slew of coloured dials, the latest Navitimer models also brandish features that, while appearing nuanced at first glance, lend them a more proportionate silhouette while amplifying the ‘modern retro’ spirit. These include a flattened slide rule and a domed crystal gives the appearance of a more compact and vintage-inspired look, the reinstating of the AOPA winged logo to the original 12 o’clock position, as well as alternate polished and brushed finishes on the metal surfaces for a touch of luxury.

“We really want to combine the best of the past and present with the new Navitimers. We took a lot of design elements from the original Ref. 806 model while cleaning up the look little so it is slimmer and looks more modern. If there is Breitling watch that you need to be really careful about redesigning, it is the Navitimer,” says Berneron. 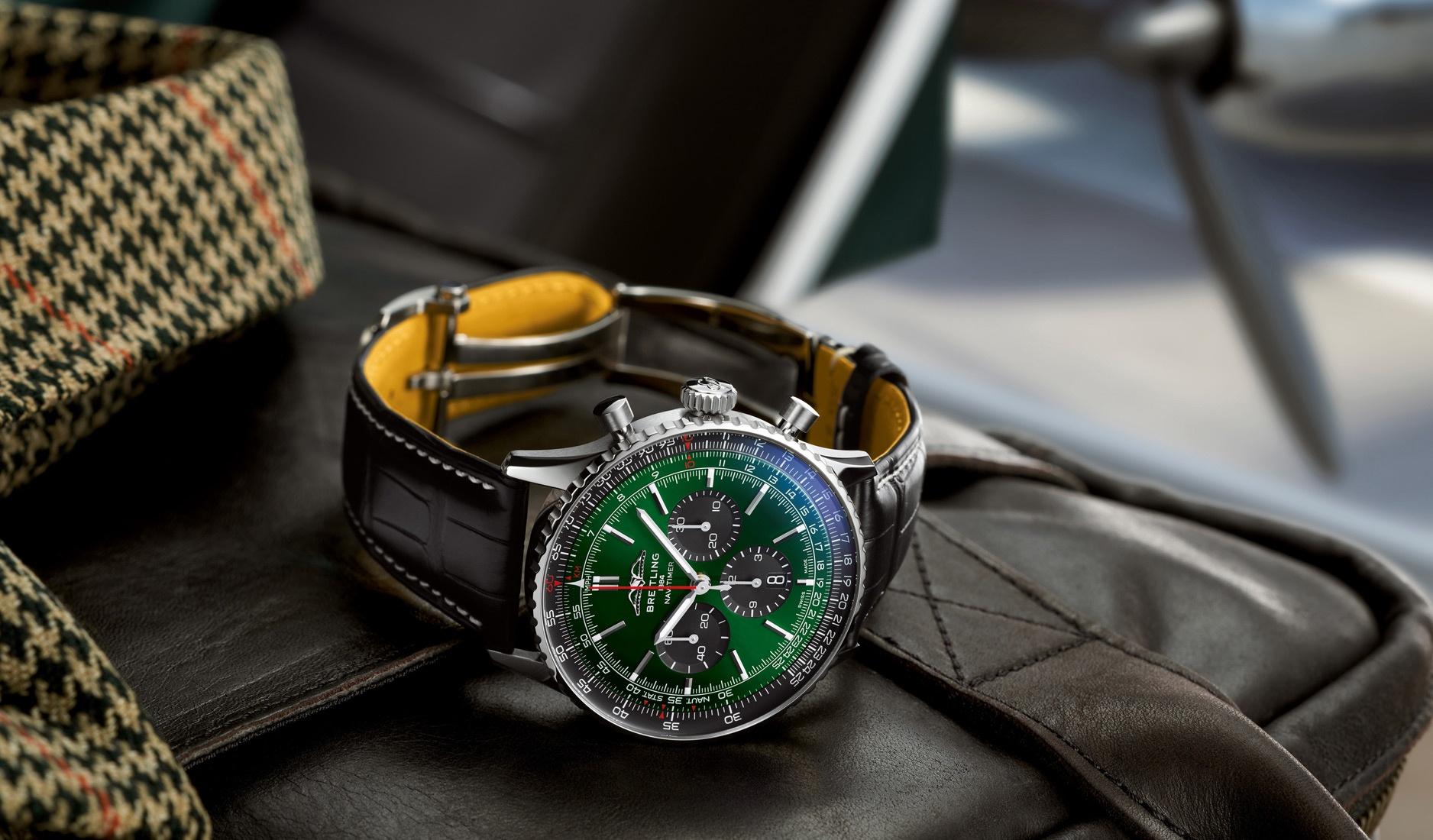