An exquisite mechanical ballet from Breguet. 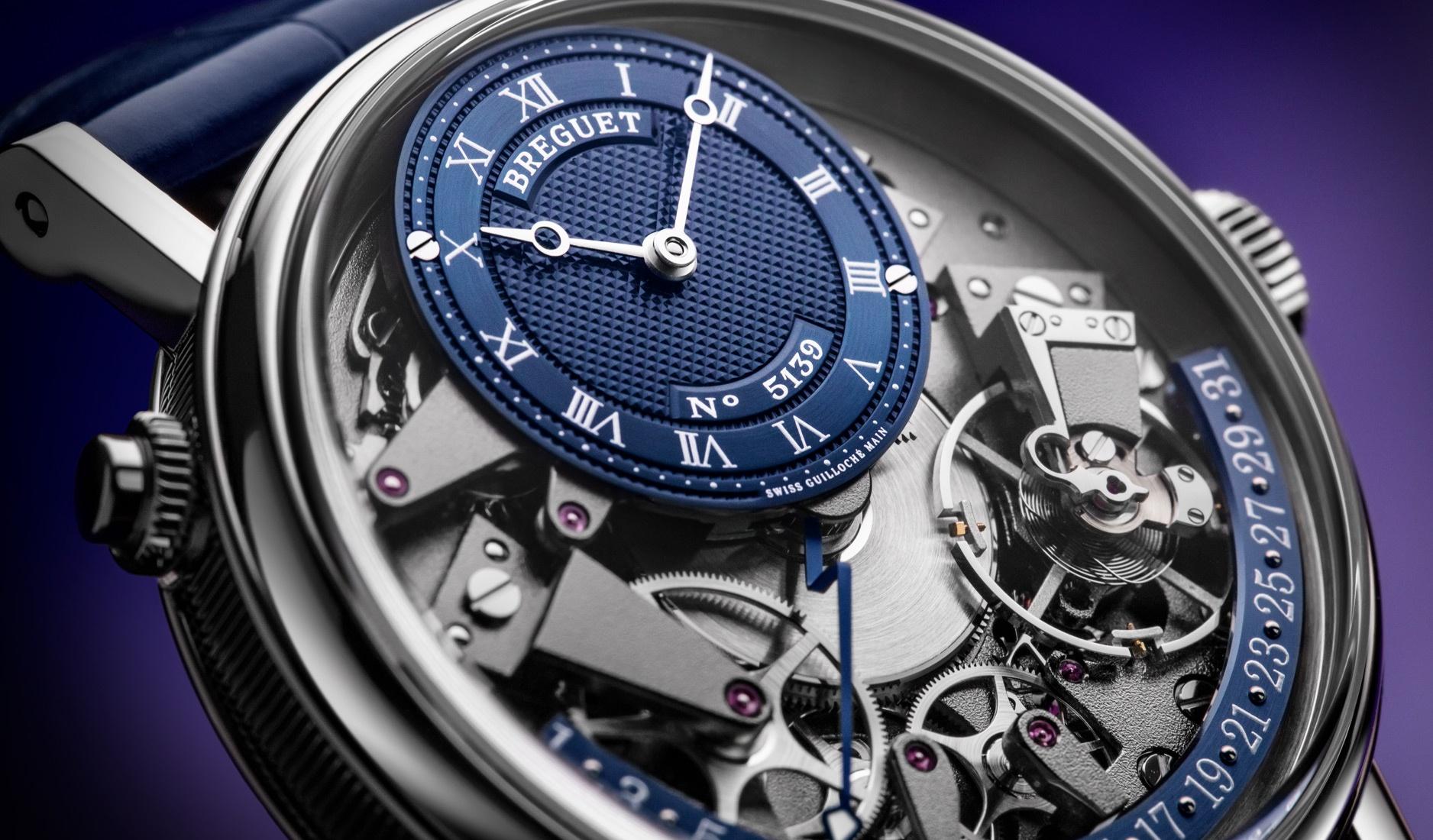 There is nothing better than an openworked dial to eloquently express a timepiece’s horological spirit. The sight of a mechanical watch’s finely finished innerworkings clicking in gear, served by the constant whirring of its beating heart (known as the balance), can be mesmerising and thought-provoking in equal measure. And such experience is especially enriched when we are peering at a creation by Breguet, a 267-year-old marque and a true master of the craft.

The Tradition Quantième Rétrograde 7597 is that sort of watch to quicken the pulse. Part of Breguet’s Tradition collection that launched in 2005, the watch bears direct lineage to the brand’s well-documented ‘souscription’ pocket watches from the 18th century, a range of basic but well-crafted timepieces that were made on a subscription basis. Those pocket watches were distinguished by their relatively simple movements featuring large barrels, balances and Breguet’s proprietary ‘pare-chute’ shock absorbers, an architecture that now serves as a distinctive feature on the Tradition watches. 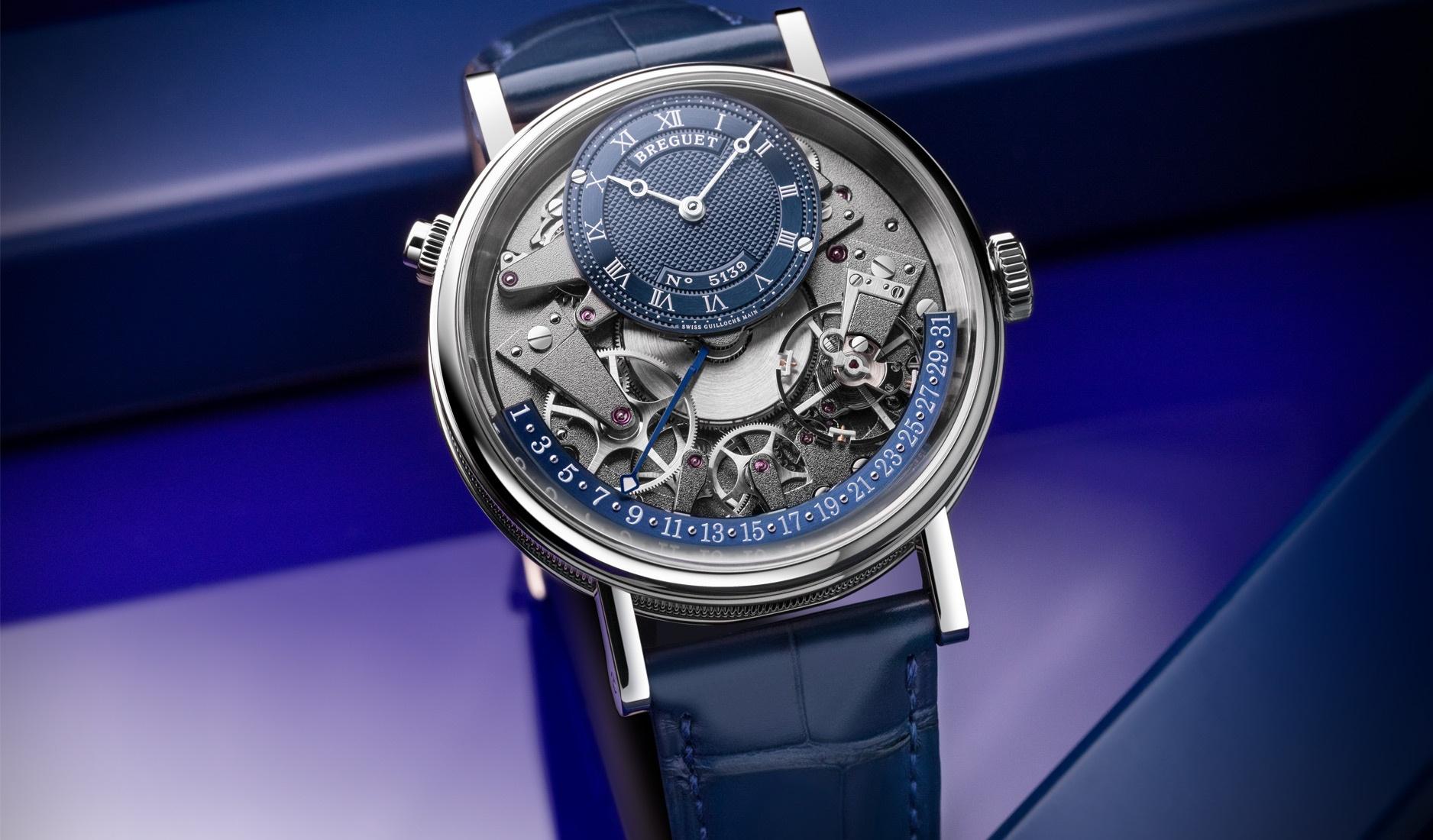 A well-rounded collection that counts bejewelled ladies watches as well as high complications in its line-up, the Tradition line is loved for the unabashed parade of mechanical parts. The time-telling component typically occupies just a quarter of the face, via a small off-centred sub-dial, while the rest of the dial is occupied by the exposed movement.

A follow-up to a reference from 2020, the new Tradition Quantième Rétrograde 7597 comes in a 40mm white gold case with anthracite-clad movement components, accompanied by a sub-dial for the time, and retrograde date counter in royal blue. Compared to its predecessors – a classical model in pink gold with silver dial, and a modern-looking monochromatic variant in white gold – the latest version strikes a nice balance between vintage and contemporary allure. 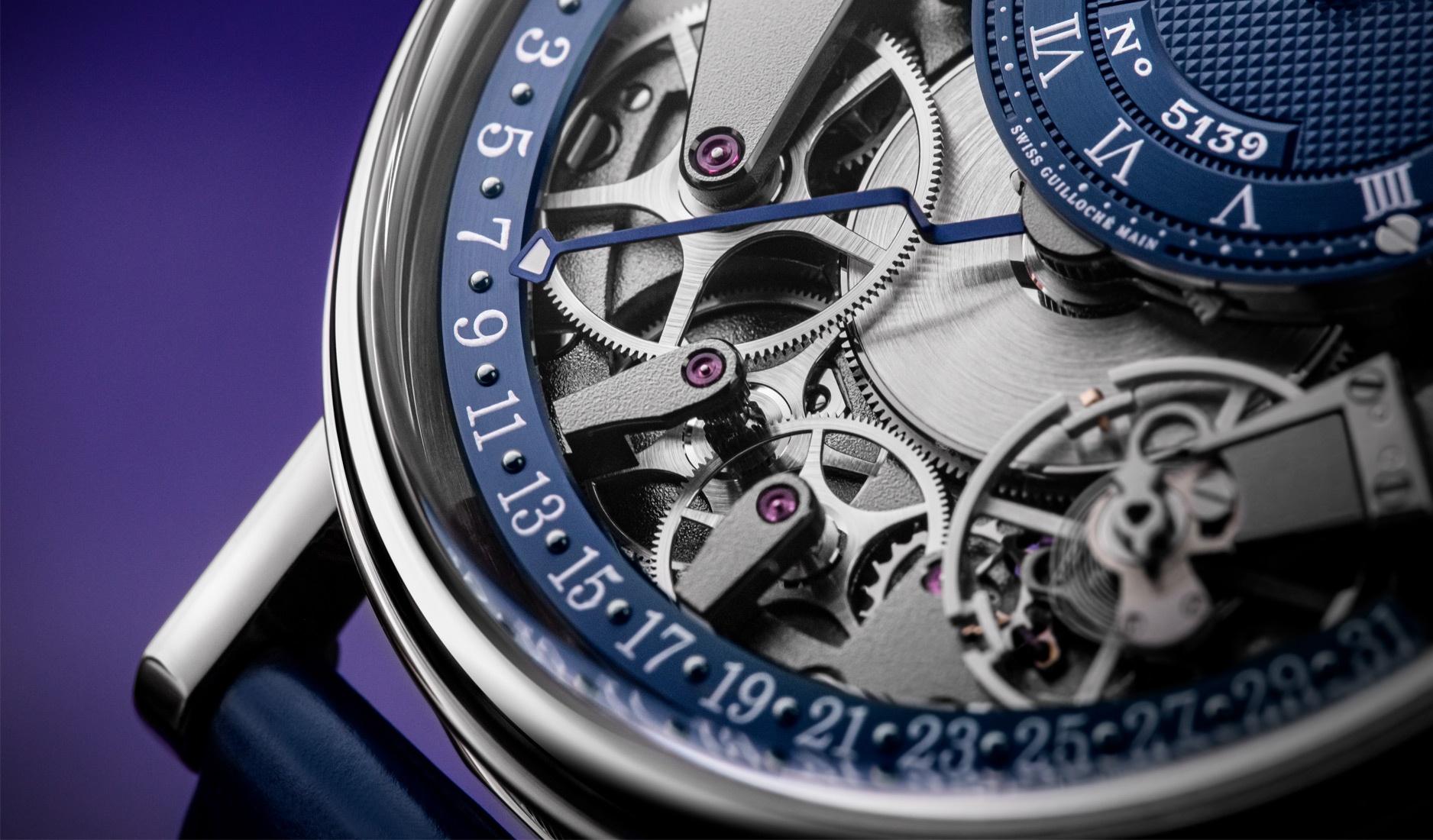 Most retrograde complications rely on the sweep-and-snap animation of the retrograde displays to enhance the watches’ visual drama, especially if they serve as indicators for the hours, minutes or seconds. With a retrograde date display, the Tradition Quantième Rétrograde 7597 doesn’t offer the same measure of retrograde-driven liveliness and immediacy. After all, it takes a month for the retrograde date’s hand to snap back to its starting position. Not that this impacts the watch’s theatrics, however – the fastidiously decorated and brilliantly coloured openworked dial provides enough spectacle for any discerning watch lover.

Complemented by white gold hands and markers against a rich blue sub-dial and retrograde counter, the Tradition Quantième Rétrograde 7597’s colour combination isn’t simply charming but makes the watch really legible – evading a pitfall for many watches featuring ornate, openworked dials. Meantime, look beyond the captivating hues and you’ll be rewarded with a myriad of intricate decorations and finishes, from the hand-guilloché ‘Clous de Paris’ pattern on the dial, to the multi-level blued steel retrograde hand, to the sandblasted finish on the anthracite dial components. 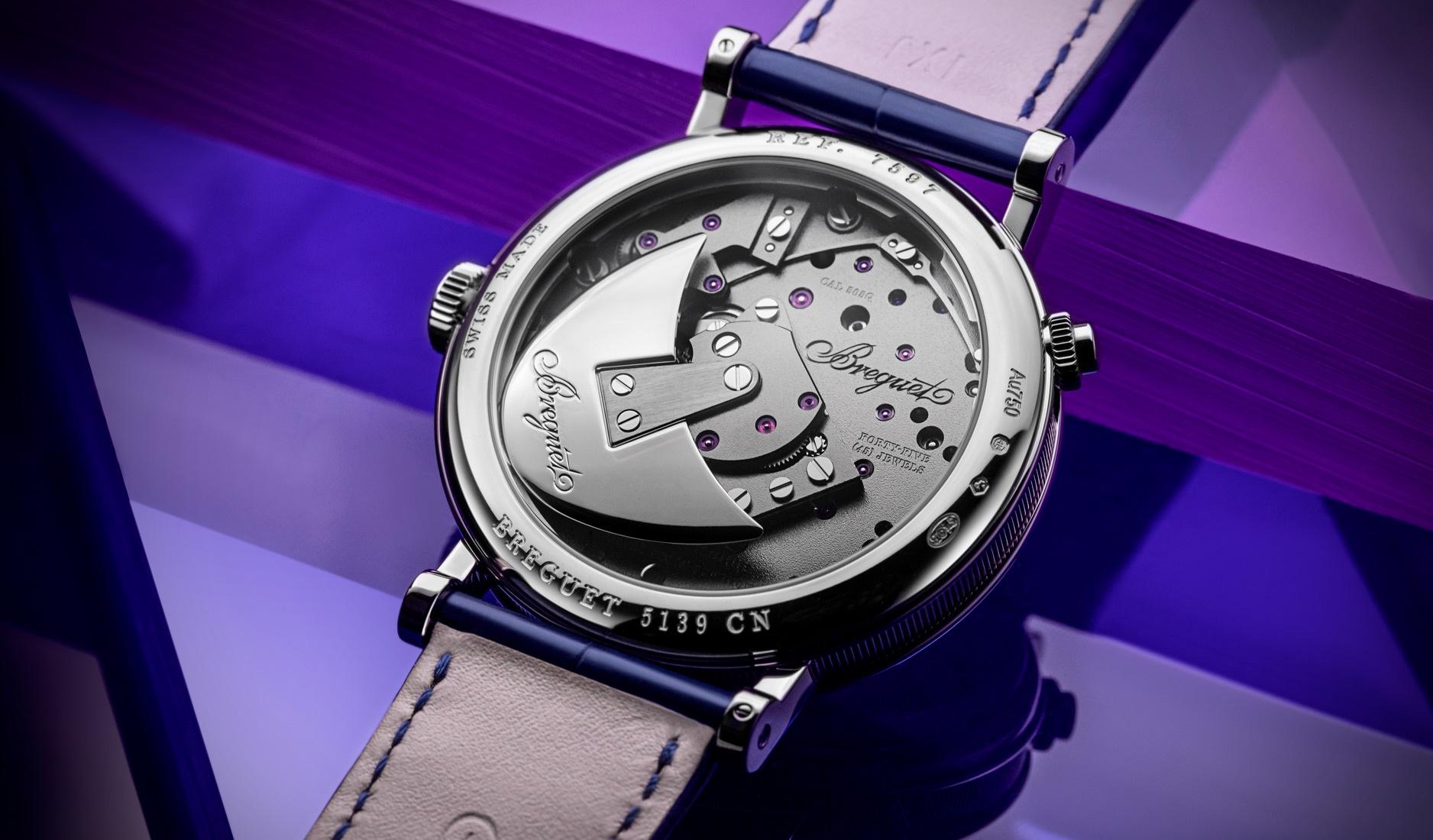 It goes without saying that the 269-part automatic movement that anchors and drives this watch is a wonder to behold too. The Calibre 505Q is not only a thing of beauty, but an innovative engine.

The movement comprises silicon horns and balance spring that ensure the vital timekeeping components are resistant to corrosion, wear-and-tear and magnetic interferences for optimum precision. Flip the watch over and one finds a white gold oscillating weight crafted in the shape recalling that of the mass found in Breguet’s ‘perpétuelle’ watch from 1780, one of the earliest examples of an automatic watch. Even as the Tradition Quantième Rétrograde 7597 entices us with its newfound contemporary style, its unyielding respect for tradition – as with all Breguet watches, really – remains a defining virtue. 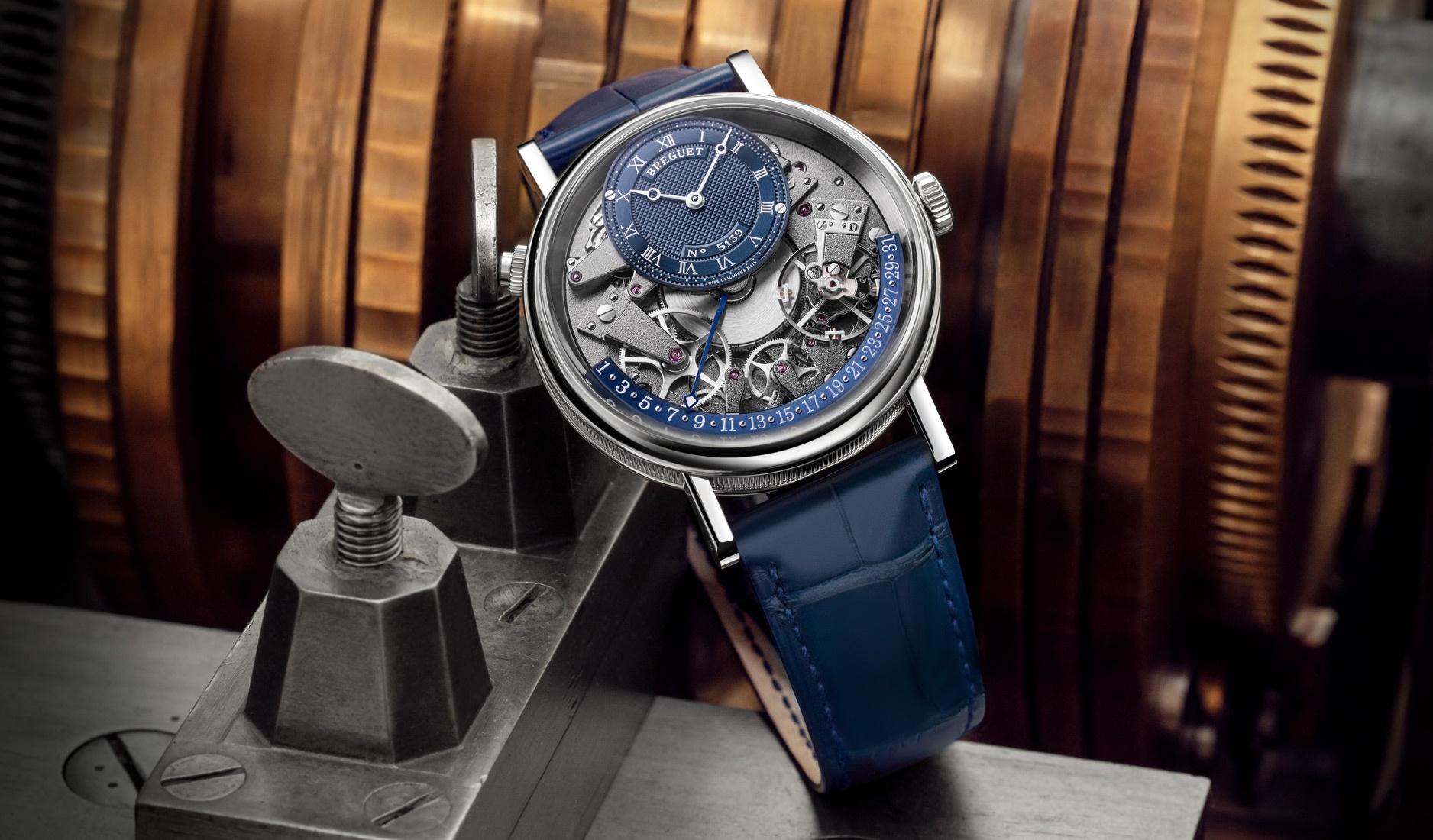