A heritage-laden dress watch beyond compare.

When we say ‘Breguet’, you say ‘tourbillons’. Right? Absolutely. But do you know that you can also say ‘dial art’, ‘secret signatures’, and many more besides?

The object of our affection in this post, the Classique Extra-Plate 5157, may not sport the famous gravity-cancelling mechanism that the brand’s founding master watchmaker invented back in 1755. (Of course, there have also been many other epochal inventions besides the tourbillon, like the self-winding movement and the pare-chute shock absorber, but that is for another post.) But this svelte and distinguished-looking dress watch is as much a blued-blooded Breguet creation as the aforementioned technical innovations.

If one didn't know better, the Classique Extra-Plate 5157 may seem like another top-dollar office-appropriate timepiece. But underneath the watch’s regal demeanour – and it does look appropriately elegant and pricey – lies a wealth of Breguet hallmarks that would thrill any serious hobbyist.

The dial takes pride of place here, decorated by what is known as the Clous de Paris hobnail style of engraving. The pattern is etched using a technique called engine-turning, whereby the artisan uses a hand-operated device to carve geometric patterns on a metal surface. While the technique has been around since the 16th century, it was originally used on watch cases, until Abraham-Louis Breguet decided to feature it on watch dials. Although many other brands have since followed suit, a finely decorated engine-turned dial remains one of Breguet’s signatures.

Engine-turned dial aside, other design elements that evoke the legacy of Breguet’s past include the iconic Breguet hands, blued with the open-tipped end, which other brands also use; the fluting on the caseband that recall Breguet’s vintage pocket watches; and a secret signature engraved on either side of the 12 o’clock numeral, a standard feature Abraham-Louis Breguet himself introduced to prevent counterfeiting.

As a technical counterpoint to the watch’s gorgeous finery, Breguet has made the Classique Extra-Plate 5157 very slim and restrained in terms of dimensions. By making the watch a natural accompaniment for sartorially elevated outfits, it is as if the brand wants us to recall the dress watches of yesteryears. 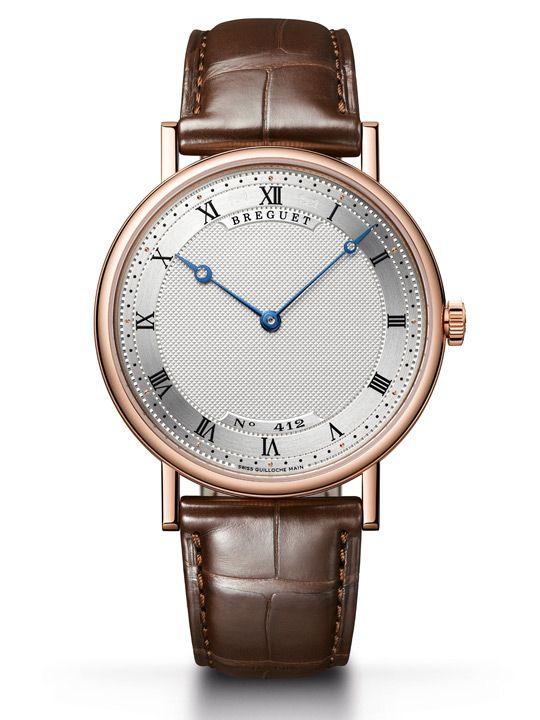 To achieve this, the brand has sliced the case to a mere 5.45mm in height and used the ultra-thin Cal. 502.3 automatic movement with silicon balance spring that measures just 2.4mm thin. Despite the svelte profile, mechanical performance is guaranteed with 45 hours of power reserve. Strength and sophistication in one package? With the Classique Extra-Plate 5157, it really looks like one can have his cake and eat it.