Blancpain Fifty Fathoms: The Making Of The Modern Dive Watch 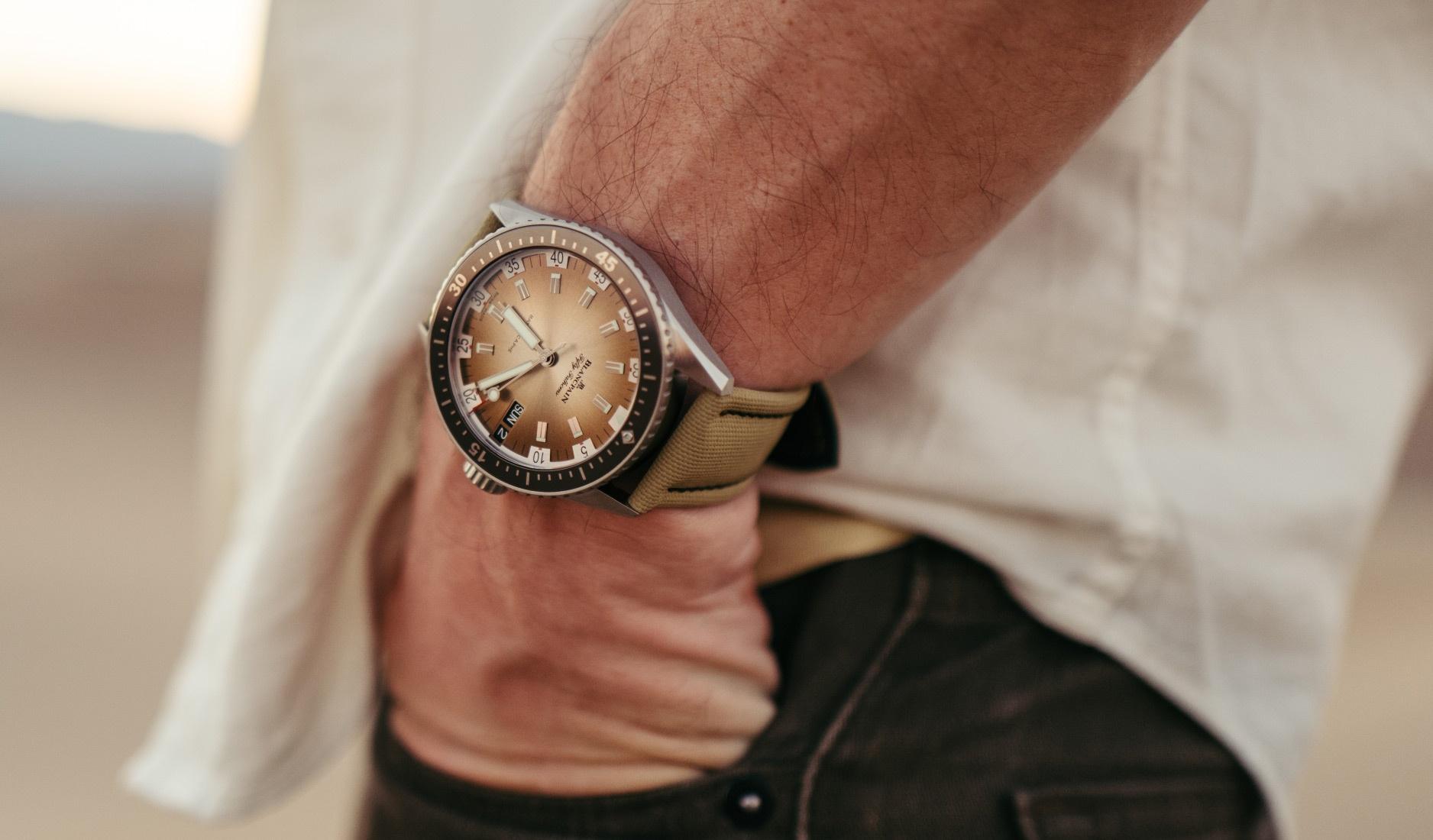 One only needs to check out Blancpain’s 2020 Fifty Fathoms Bathyscape models to see how far the epochal dive watch collection has evolved. There is a luxurious variant in Sedna gold with gorgeous blue ceramic bezel and sunburst dial, as well as two colourful, eye-snapping versions – a flyback chronograph in marine green, and a retro-inspired day-date model in dusty ‘desert’ hue – all radiating sportive sass and a measure of showiness. 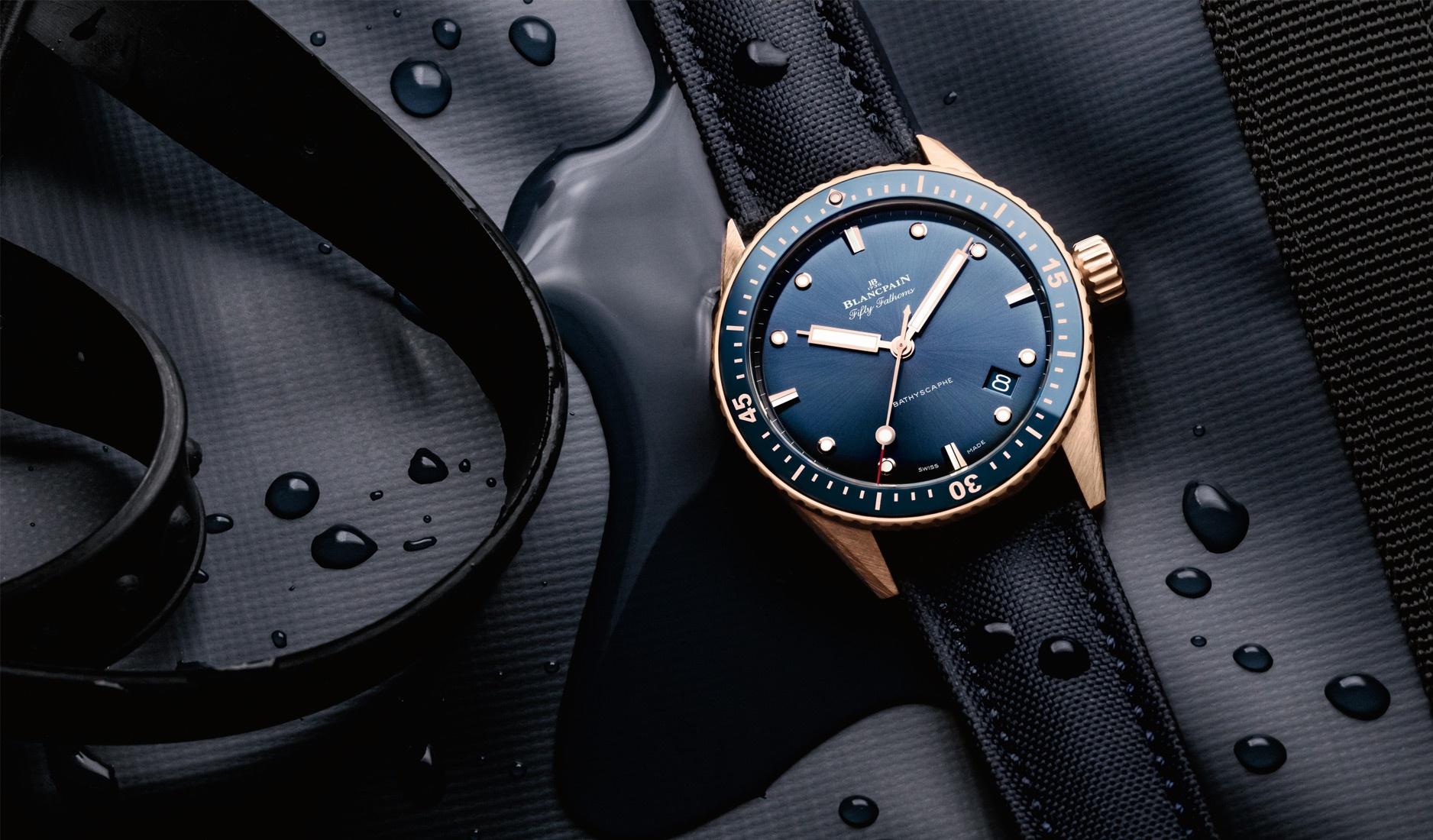 At a basic level, the watches’ chic and regal air will easily entice casual fans of sports watches. Dive watch aficionados, however, will tell you that, despite their dashing good looks, these timepieces are the latest in a long and storied line of pioneering underwater tool watches that have been built with an unwavering dedication to extreme professional performance.

Prior to the birth of the Fifty Fathoms, the post-WWII era saw the emergence of underwater tool watches with improved waterproofness. But even so, no brand had yet produced a standard-setting dive watch with features that went beyond the merits of water resistance.

Launched in 1953, the first Fifty Fathoms watch was conceived as a result of an open call from the French frogmen unit to the world’s best watch companies to create a professional, military-grade underwater tool watch. Led by then-CEO, Jean-Jacques Fietcher, an avid diver who constantly urged his staff to develop increasingly robust dive watches, Blancpain emerged as the only brand that not only met, but surpassed, the demands of the French diver unit. 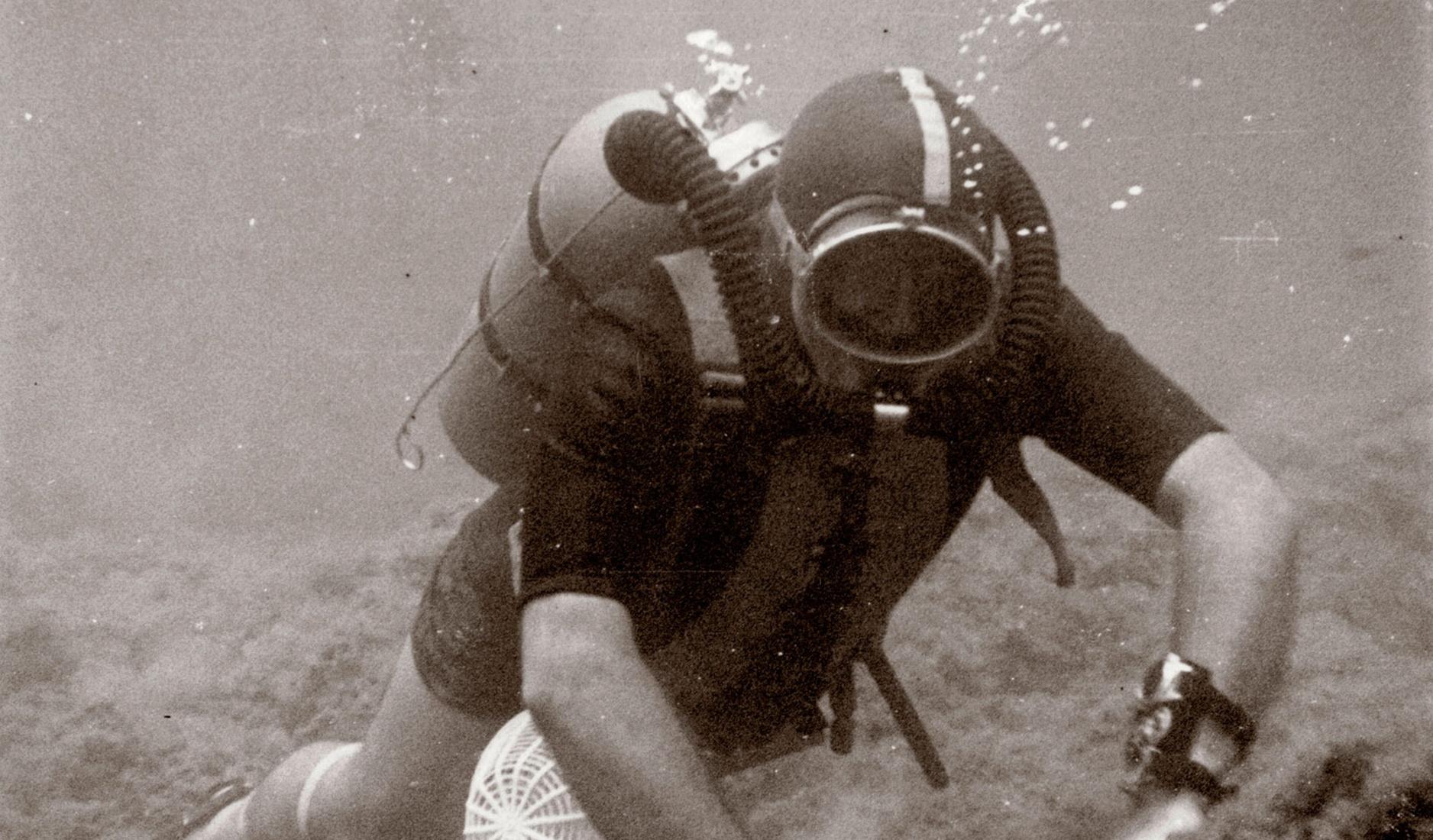 Setting Standards
The original Fifty Fathoms featured a high-contrast dial, a lockable rotating bezel to measure remaining dive times, and water resistance of 91.45 metres (equivalent to fifty fathoms, with fathoms being a unit of measurement for water depth, whereby one fathom is equal to 1.8288m), courtesy of a double-sealed, screw-down crown system. The performance specs established by the first Fifty Fathoms were so high, they mirrored the same characteristics set decades later in 1996 by the ISO 6425 standard for dive watches.

Patents for the original Fifty Fathoms

Garnering recognition from the get-go, the first Fifty Fathoms cemented Blancpain’s place in watchmaking history as the company to have made the first dive watch of the modern era. And with that reputation, came orders from military units the world over, which commissioned the company to make Mil-Spec (military specification) dive watches. Professional divers, too, were quick to the draw. Legends such as Jacques-Yves Cousteau and, more recently, the likes of Laurent Ballesta and Gianluca Genoni are among the acclaimed professionals who have given the Fifty Fathoms shouts of approval by wearing the watch on their deep sea expeditions. 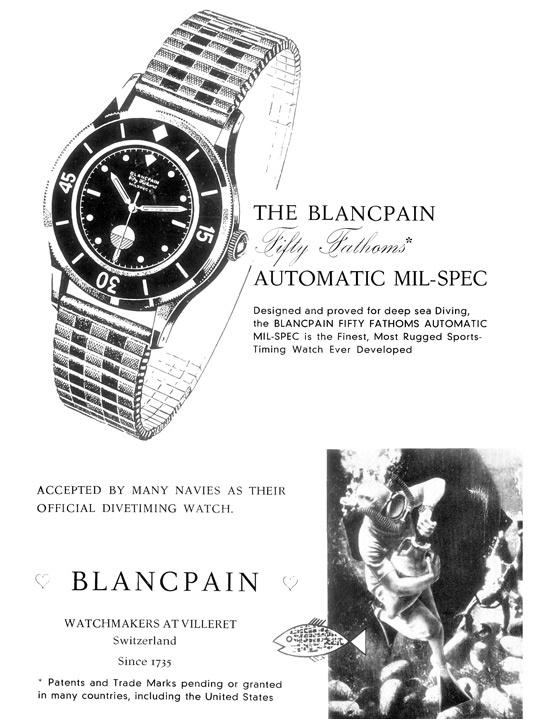 Always Stepping Up
Despite the acclaim, the Fifty Fathoms isn’t a collection to rest on its laurels. The collection has constantly evolved to meet the demands of both its professional clients, as well as discerning civilian watch lovers.

While the collection rigorously upholds that form should always follow function, the watches come in an array of styles to suit all personalities. They range from the forthright machismo of regular Fifty Fathoms line bearing plus-sized cases with all-sapphire crystal bezels, to the aforementioned Bathyscaphe models that vaunt a dressier disposition. 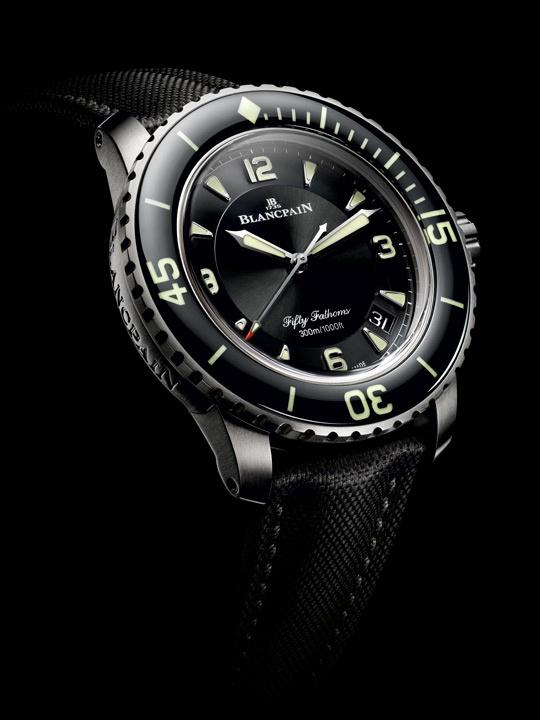 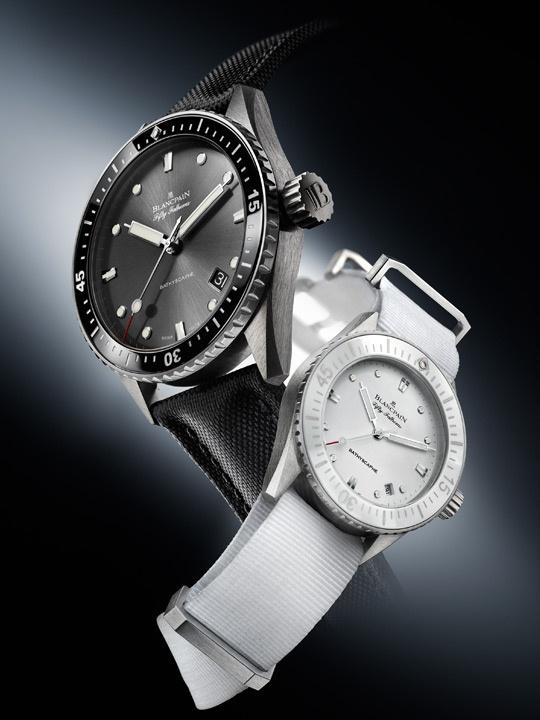 Today, all Fifty Fathoms watches are water resistant to at least 300m. Also, the latest models are all powered by in-house movements that not only promise greater energy efficiency and precision, but, in some instances, boast top-of-the-line complications spanning annual calendars to tourbillons. Among the more extreme models to have emerged from the collection is the Fifty Fathoms X Fathoms, a 55.65mm titanium-clad behemoth with a mechanical depth gauge, as well as the Fifty Fathoms Tourbillon 8 Jours, a technically sophisticated creation, which features a tourbillon movement with eight days of power reserve. More recently, Blancpain has introduced titanium cases into the Fifty Fathoms line-up, as well as a new in-house automatic flyback chronograph movement, the Calibre F385 with column wheel control, to extend its technical offerings. 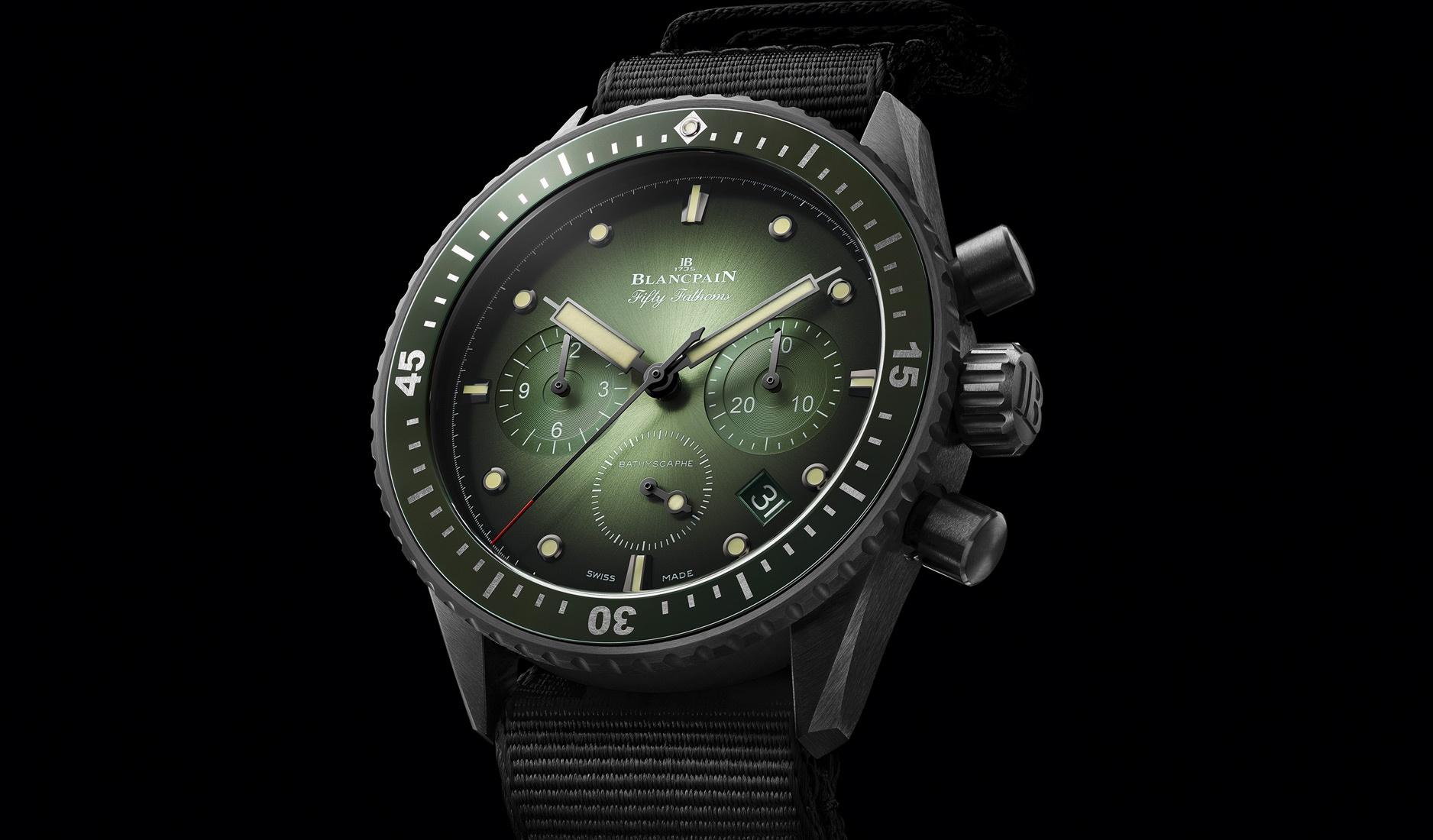 Of course, being the first doesn’t necessarily mean being the best. But having set the bar right from the beginning, the Fifty Fathoms collection has been exemplary in leading the line for implementing new technologies and features to push the envelope on dive watches. 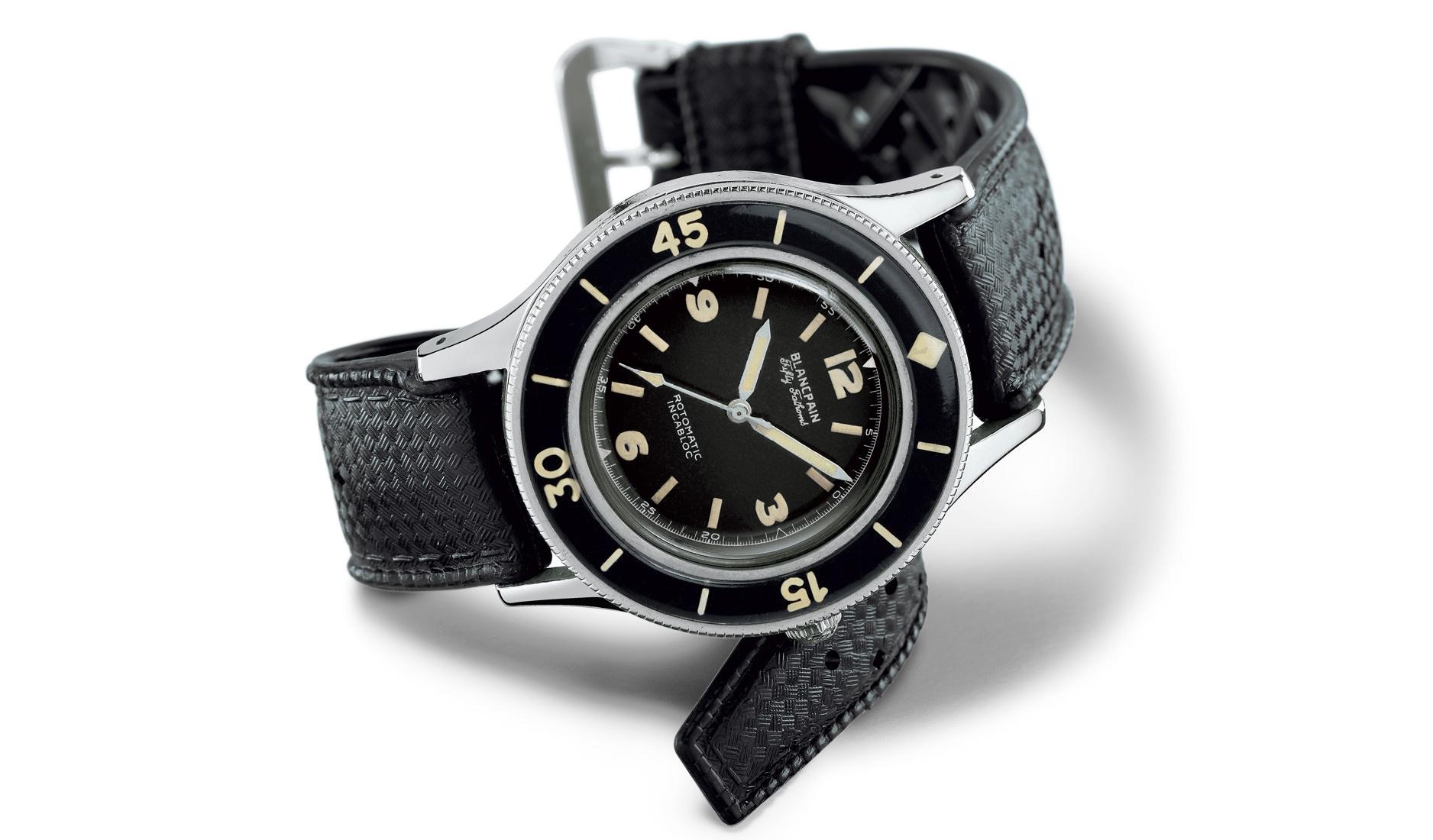