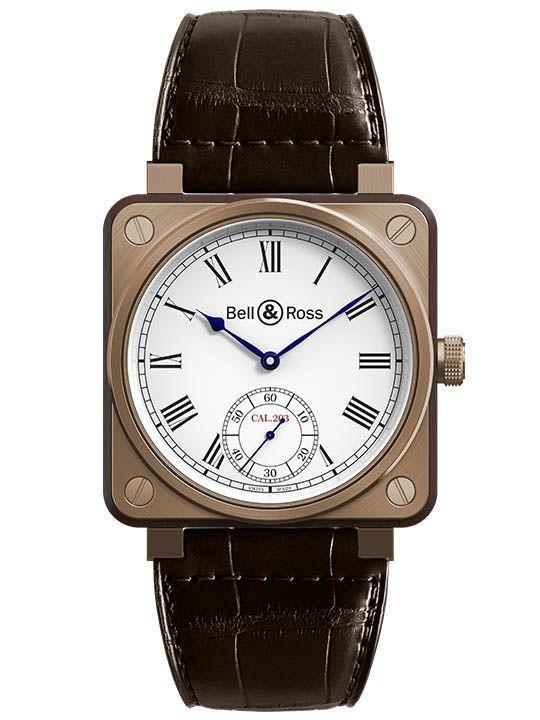 Based on round marine clocks which were housed in a square wooden box and fitted to ships in the 17th century, the new marine collection from Bell & Ross reinterprets the ship’s clock as wristwatches in the Instrument de Marine collection, which includes a skeleton chronograph and tourbillon chronograph.

Like the brand’s iconic BR 01, the BR 01 Instrument de Marine is housed in a square case with a round dial. But instead of the collection's airplane instrument panel-inspired signature large-format Arabic numerals against a sporty backdrop, the BR 01 Instrument de Marine features elegant Roman numbers on a white lacquer dial with a small seconds counter at six o’clock. The look is finished with blued steel hands—a nod to the refined watchmaking aesthetics of the 17th century.

In a further move to reference the past, the timepiece is fitted with a bronze case, bezel and winding crown, and finished with a band of rosewood encircling the case. A hand-wound movement, as befits the same era, drives the watch with a power reserve of 56 hours.

At first glance, the antiquated dial seems a little incongruous with the modern machismo that the BR 01 range has come to be identified with. But once you embrace that, it actually comes across rather refined and is a refreshing option in a stable of dive and aviation watches emblazoned with large numbers for legibility in more extreme circumstances. This watch will take you on that seafaring trip with a decidedly more genteel vibe and is perfect for the dapper dude who wants a “proper” timepiece with a hint of sportiness.

Panerai CEO Jean-Marc Pontroué Is Ready To Step Up