Because you can look stylish underwater too.

Just to be clear, Bell & Ross is no Johnny-come-lately when it comes to dive watches. Yes, the brand is famous for its aircraft instrument gauge send-ups like the BR01 collection and its equally, amazingly beautiful spawn. And yes, Bell & Ross is heralded by the artsy, design-loving crowd for its astute sense of aesthetics. But let not the flights of fancies distract you from its tool-watch making ethos; one where, as Bell & Ross’ founders are wont to remind anyone within earshot, form always follows function.

The Bell & Ross BR03-92 Diver Blue may resemble a close cousin of the aviation-inspired BR01 range. In truth, the watch boasts lineage that stretches way back – to 1997, in fact, when Bell & Ross introduced the Hydromax, a watch famous for its world-record 11,100m water resistance. There have been other dive models over the years, such as the Diver 300 (2002) and the BR02-92 (2007), both touting utilitarianism and robust design as virtues, but if we were to be absolutely honest, none looked or felt quite at home on the wrist as the latest iteration.

For one, the BR03-92 Diver Blue’s square-shaped profile is immediately familiar. While we believe Bell & Ross has commercial considerations to house its new dive range in that iconic shape – starting with 2017’s BR03-92 with black bezel – the brand is by no means taking the easy way out.

As a tool watch, the BR03-92 Diver Blue surpasses the ISO 6425 international performance standards for diver watches with features that include 300m water resistance, legibility underwater, anti-shock and anti-magnetic properties.

In short, it is as legit as dive watches come and we imagine that it won’t shy from action when called upon. (Hey look, Bell & Ross even has photo proof!)

But it is as a chic and comfortable wrist statement that the BR03-92 Diver Blue really shines. If last year’s version with black bezel and dial emanated a rough-and-ready vibe, the BR03-92 Diver Blue injects a bit of that dressy-casual style that fans have come to love about the brand. And that little yellow detail on the hour hand and water resistance rating? That just takes the style meter up a notch.

Read this for all you need to know about dive watches. 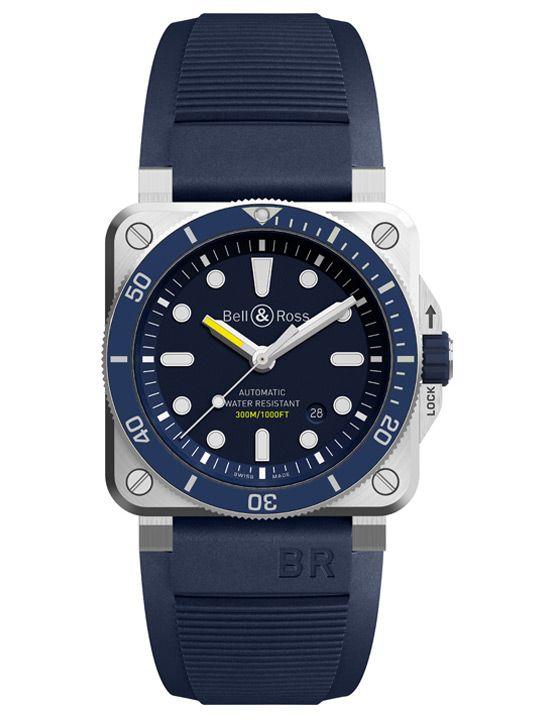