The DeVille Trésor from 2014

The last time we saw the Trésor family was four years ago, when it was introduced at Baselworld 2014. Back then, the look was one of uncluttered elegance with a clean Clous de Paris dial and impossibly thin baton indexes (above). A slim date window sat unobtrusively at six o’clock, as if afraid of disrupting the harmonious symmetry of the dial. At slightly over 10mm in height, it was dress watch perfection.

For 2018, the Trésor collection gets updated with sweet options for ladies. Previous incarnations saw a domed mother-of-pearl dial with a diamond-paved bezel, while the new version (above) features a slinky wave of diamonds on opposite sides of the bezel and up a single lug.

Dial-side, the simple baton indexes have been replaced by large, elongated Roman numerals (albeit still supermodel slim) which take up almost the entire face. You’d expect a rather garish result but Omega has managed to make huge numerals a design aesthetic, leading to a really sleek look.
A further feminine touch comes in the form of a flower-shaped crown (above) with a floral pattern made up of five Omega logos in red liquid ceramic. At the centre is a single diamond for an extra touch of bling. 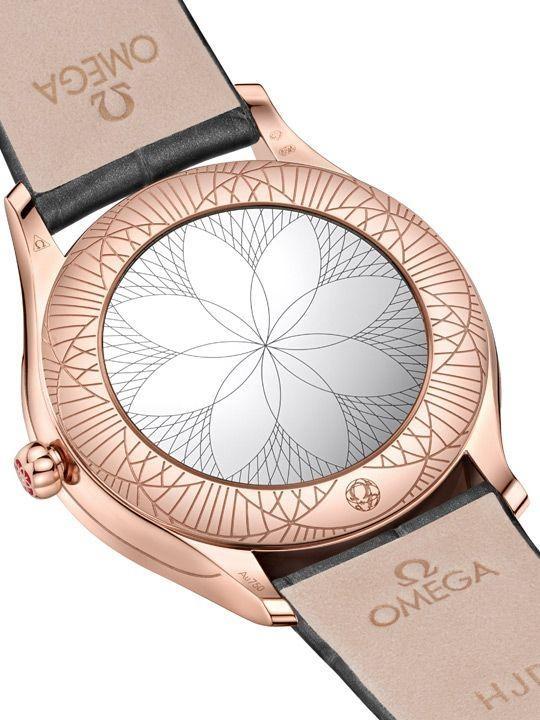 On the mirrored caseback is what Omega calls a ‘Her Time’ design—circular motifs that come together to form an intricate blossom. And how ingenious is it to include a mirror at the back so we can always check if our lippie needs a quick touch up?

The watch comes in female-friendly sizes of 36mm or 39mm, in 18K Sedna gold or stainless steel. While this is clearly and unequivocally a model for ladies, it’s also a far cry from the dainty, heavily bejewelled feminine tickers that were all the rage before. Clearly, Omega (who so astutely created the Speedmaster 38 range) knows a thing or two about women wanting bigger, even slightly more androgynous timepieces.

Powering the timepiece is Omega’s quartz Calibre 4061 that also drives the Seamaster Aqua Terra 28mm. It would have been nice if a mechanical calibre was used instead (the 2014 men’s version we mentioned earlier runs on Omega’s manually-wound Calibre 8511) and that’s probably our only gripe about the watch. That said, it’s a stunning and versatile piece that will last for many years to come.