A Bell & Ross icon supercharged with Formula One prowess.

This time last year, Bell & Ross, better known for its dalliances with the world of aviation, inked a milestone partnership with the Renault Sport Formula One Team. The deal was quickly followed up with two forged carbon-clad commemorative timepieces – the BR-X1 RS16, a skeleton chronograph, and the BR-X1 RS16, a monopusher chronograph with flying tourbillon. 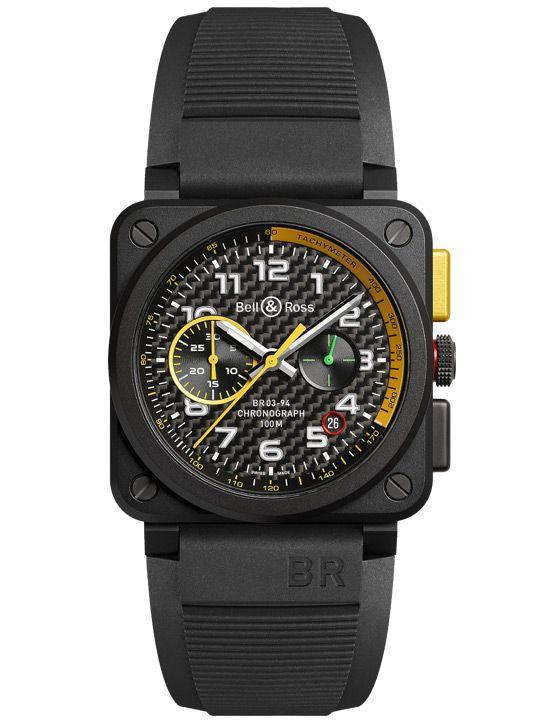 This year, Bell & Ross adds to the Renault Sport-inspired family with the BR03-94 RS17 (above), a more pared-down, but no less testosterone-charged offering. Compared to the BR-X1 models – hailing from a collection distinguished by the latest advancements in mechanical and material experimentation – the BR03-94 line of watches are slightly smaller and relatively 'simpler'. They come in 42mm cases, housing industry-standard ETA 2894-based chronograph movements that have been modified to the brand’s specifications.

Indeed, the BR03 line has proven to be a versatile canvas, adapting the trademark airplane instrument panel design to more manageable dimensions, while allowing for aesthetic variations spanning dressy looks from the three-hand-and-date BR03-92, to different permutations of the BR03-94 chronographs.

With the BR03-94 RS17, the watch is dressed in the Renault Sport team colours – the yellow and black colourways echoing the drivers' attire, as well as the R.S.17 from which the watch is named after.

More Formula One racing inspirations can be found on the ceramic case that expresses a sporty demeanour, as well as the dial made of carbon fibre, a lightweight material common to the world of competitive motor racing. Complete with dashes of green and red, the entire watch looks like it belongs on the steering wheel of the RS17 racer.

The folks at Bell & Ross have announced that more such commemorative editions will be unveiled when BaselWorld 2017 finally comes around. That’s one more reason why we can’t wait for the fair to get off the blocks.