The most famous modern-day German watch comes of age.

IT HAD THREE SIBLINGS AT ITS TIME OF BIRTH
On the day of A. Lange & Söhne’s 1994 relaunch, the company showcased four collections comprising 123 watches in total. All were promptly sold out. There was the Lange 1, the signature collection that bowled over collectors with its asymmetrical dial with outsized date and three-day movement; the Arkade ladies’ wristwatch that has since been discontinued; the Saxonia, a sleek, mid-sized gold watch; and the Tourbillon ‘Pour le Mérite’, the piece de resistance with fusée-and-chain transmission, a feature previously never seen in a wristwatch.

TODAY, THE LANGE 1 IS A FULL-FLEDGED FAMILY
In 25 years, the Lange 1 isn’t just A. Lange & Söhne’s most distinctive watch collection, it is also the brand’s most comprehensive. At last count, the Lange 1 collection comprises nine models. From ‘basic’ Lange 1 models that include the plus-sized Grand Lange 1, to minor complications such as the Lange 1 Moonphase, to top-drawer technical creations like the Lange 1 Tourbillon Perpetual Calendar, this is one line-up that covers the ground for every Lange aficionado. 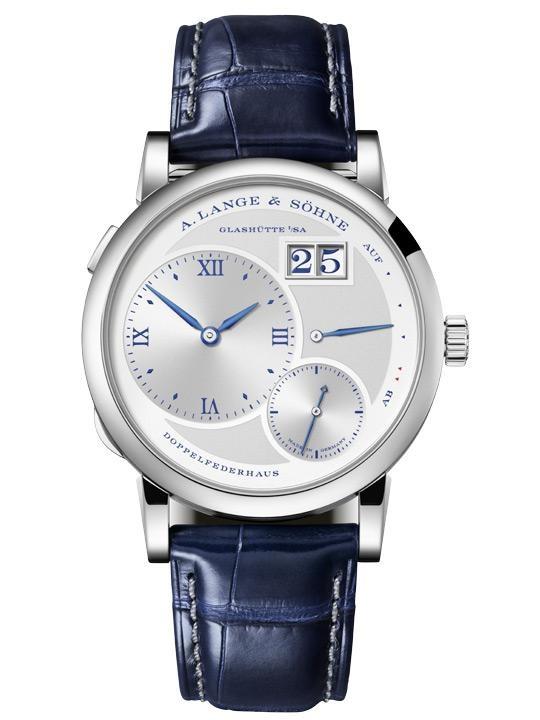 ABOUT THAT SIGNATURE OFF-CENTERED LOOK
If you ever looked at a Lange 1 and wondered why everything seems to be in its right place, despite the unconventional off-centered dial interface, the answer lies in ancient math. The signature look, comprising two off-centred sub-dials for the time, and an outsize date display with twin windows, were designed based on the ‘Golden Ratio’, an ancient mathematical formula that was thought to have been conceived way back during the construction of the Great Pyramid of Giza, and has continued to impact the art and designs of some of the most prominent artists in the world like Le Corbusier and Salvador Dali.

THE OUTSIZE DATE HOLDS SPECIAL SIGNIFICANCE
The famous twin-date display doesn’t just look pretty – it literally oozes history. The date apertures are modelled after the five-minute clock in the Dresden Semper Opera house – the same clock the brand founder (or father of German watchmaking, really) Ferdinand Adolph Lange made in the 19th century. The display comprises two components: a circular disc with the numerals 0 to 9, and a cross-shaped disc with the numbers 1 to 3. In 2015, the Lange 1 line was fitted with an improved movement – the handwound L121.1 that also powers the 25th anniversary edition - which allows for the display to jump precisely at the stroke of midnight.

THE ‘25TH ANNIVERSARY’ EDITION WILL DRIVE COLLECTORS CRAZY
Not that it ought to come as a surprise. Limited to 250 pieces, the commemorative edition marks the occasion in a way that Lange fans love: with class and a well of emotion. The 38.5mm white gold case frames an argenté-coloured dial with blue indicators, a sophisticated combination accentuated by a blue alligator strap.

Of special interest, though, is the hand-engraved balance cock, adorned with the ‘2’ and ‘5’ numerals of the outsize date to mark the occasion, as well as the hunter-style caseback that is engraved with the words ’25 Years Lange 1’; the likeness of Walter Lange and Günter Blümlein, the men responsible for the modern relaunch of the brand; and the Lange’s workshop from 1873.