It is every bit as mind-blowing as it looks.

A FUSÉE-AND-WHAT?
It is exactly what it says it is. There are two components here: a chain (well, we all know what that is), and a fusée, which is less commonly seen. A fusée is a cone-shaped barrel to which one end of the chain is attached (see below, 'A'). In a watch, the other end of the chain is attached to the mainspring barrel ('B'). A mainspring barrel is the component that stores up the energy when a watch is wound.

WHAT DOES IT DO?
It helps a mechanical timepiece tick with undulating precision. In watchmaking terms, it is known as 'constant torque'. Like how a toy car has more power when it is fully wound, and less power towards the end, a mechanical watch's performance and precision declines at the end of its winding cycle. The fusée-and-chain, which is based on a 16th century invention, is among a variety of mechanisms that watchmakers have devised to help ensure consistently optimum energy transmission in a watch, whether at the start or the end of its winding cycle. 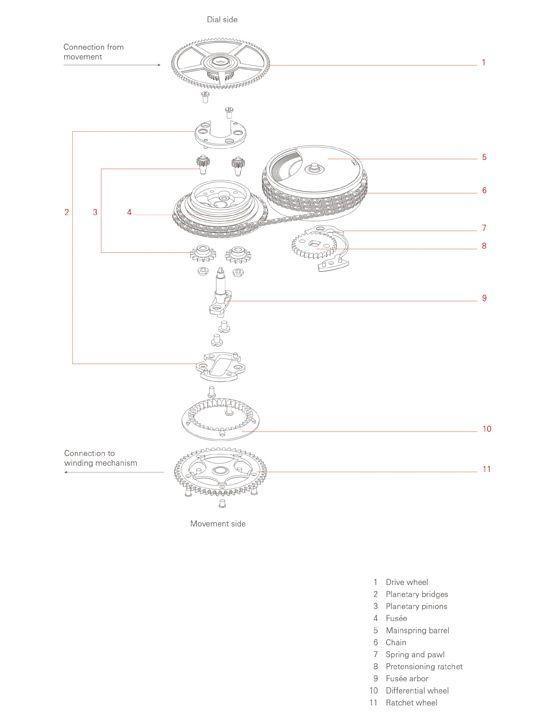 SOUNDS LIKE A LOT GOING ON.
It is. And not many brands have the technical smarts and skills to do this. Being an archaic mechanism previously used on clocks and pocket watches, the fusée-and-chain had to be miniaturised to insane proportions to fit into a wristwatch. In A. Lange & Söhne's version, each chain comprises 636 parts. While it looks delicate - measuring 15cm long, 0.5mm wide, and weighing just 0.12g - the chain can haul up to 2kg of load.

LANGE'S WATCHMAKERS HAVE THEIR WORK CUT OUT THEN.
They do, and that is why you find the fusée-and-chain mechanism only in the best A. Lange & Söhne watches. The brand even has a name for this class of timepieces - calling them the 'Pour le Mérite' collection.