Just when you thought it couldn’t get any sexier.

Though it is a ‘young’ collection in horological terms – the A. Lange & Söhne 1815 Chronograph was introduced in 2004 – it is one of those watch lines that is endowed with such timeless style and critical acclaim, that it seems much older than it looks. One can, for instance, picture the 1815 Chronograph alongside other iconic chronographs – something like Patek Philippe’s Ref. 5170 comes to mind – and it will more than hold its own.

The watch’s natural stateliness is due to its inspiration, flaunting a look that recalls vintage pocket watches. The dial is distinguished by unerring symmetry, featuring one chronograph counter on either side, and framed by a railway track-style minute scale. This is a look that has remained unchanged and anchored the 1815 Chronograph collection since its debut, with the exception of a boutique exclusive from 2015, which featured a pulsometer scale.

This most recent update flaunts the same interface as the boutique edition, with the latter's silver-and-white dial replaced by a black-and-white display that imbues the watch with serious black-tie sophistication. The size of the white gold case remains unchanged at 39.5mm. While arguably small-ish for a chronograph, it is well-suited to the Lange aesthetic, allowing for easy pair-ups with power suits and other boardroom-appropriate get-ups.

The hand-wound Calibre L951.5 that drives the watch, too, will be familiar to Lange collectors. It is the same flyback chronograph movement that has powered the 1815 Chronograph since 2010. Beating at a slower cadence than most at 18,000 vibrations per hour, compared to 21,600 or 28,800 vph in most other mechanical watches, the movement offers greater timekeeping stability and the ability to measure time accurate to 1/5th of a second. As expected of a high-end chronograph movement, this one comes with a column wheel mechanism that ensures smoother and more precise activation of the chronograph feature.

Truth be told, you’d be spoilt for choice. There are four versions available now: three in white gold and one in pink gold – and all of them look just as dashing as the other. The boutique edition is the one to go for you would want something exclusive, of course. But if it is boss-mode gravitas you are after, this latest addition more than does the job. 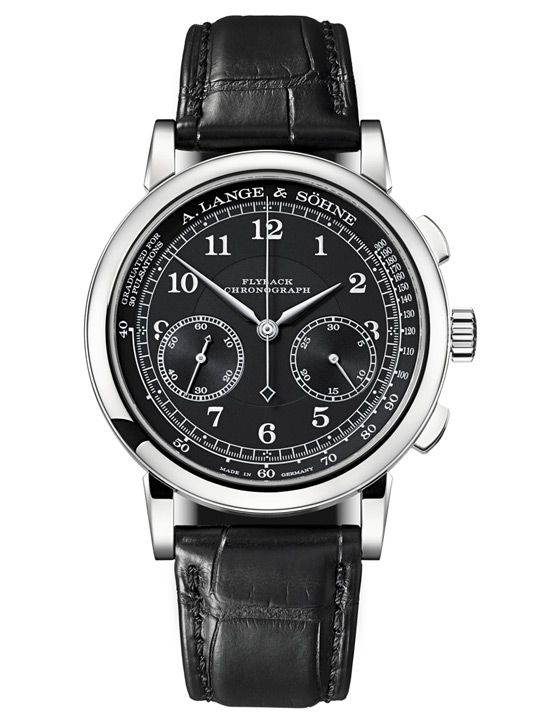